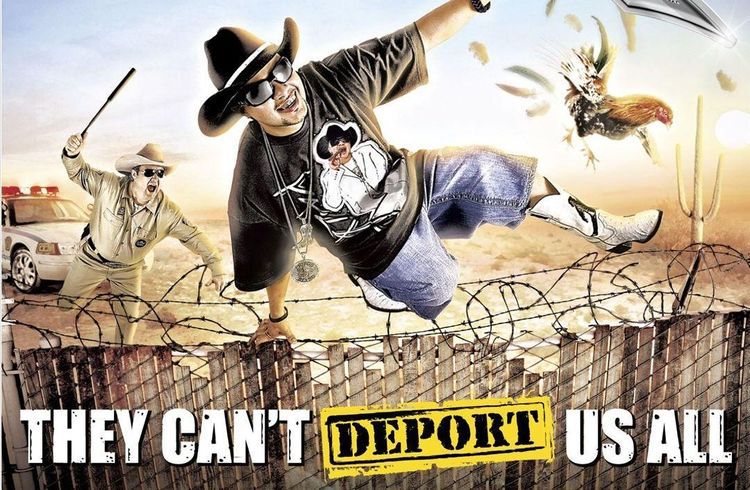 The Fulford File, By James Fulford | Chingo Bling Is Wrong—We CAN Deport Them All

Chingo Bling is the stage name of a Texas Hispanic rapper, born Pedro Herrera III, who in real life is as assimilated a Mexican-American as you can imagine.

He speaks fluent English, he went to university where he got a BA in business administration, and is a member of business school fraternity Alpha Kappa Psi, like Richard Nixon, Ronald Reagan, and Steve Forbes. What this means is that he's likely to keep more of his money than MC Hammer did of his. 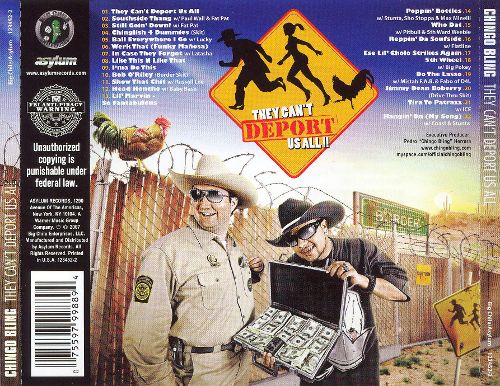 But on stage, or on video, he does a broken English Chicano act, glorifying gangsterism, wearing really bad clothes and cowboy boots with a Nike Stripe, and calling himself the Ghetto Vaquero.

Bling's latest record, due to be released on May 8, 2007 is  going to be called They Can't Deport Us All

The logo on the back cover is a parody of the famous "Aliens Crossing" sign, with Chingo running along in silhouette, a busty young lady following him, and a fighting cock bringing up the rear. 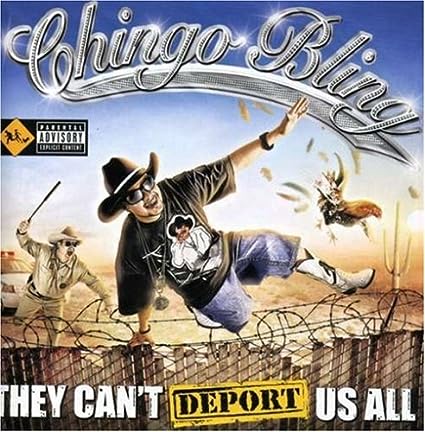 he picture on the front cover shows Chingo hopping a fence, pursued by the law. It's not clear which direction he's going in, but remember, he's an American citizen, a member of group that was supposed to start to assimilate after the Treaty of Guadalupe Hidalgo in 1848.

But they're W-R-O-N-G, of course. Very large numbers of people can be deported, it's happening around the world all the time. Amnesty International complains whenever it happens, of course, but it still happens.

It's been known to happen in America, too, when the problem gets bad enough. In 1954, President Eisenhower deported a very large number of illegals in an initiative called Operation Wetback. As Bob Park, who as a young Border Patrol officer took part in Operation Wetback, pointed out to me, Eisenhower didn't have to have any laws passed to deport people—illegal immigration was already illegal, and deportation is how the law dealt with it.

Do you really think that the country with the world's best military and the world's best transportation system couldn't do what Malaysians and Slovenians can do? Even the Mexican government manages to deport about a quarter of a million illegals every year, illegals from further south who cross their Frontera Sur.

Mostly VDARE.COM has emphasized border control, workplace enforcement and employer sanctions, and variety of economic incentives for illegals to self deport.

However, large deportation is one the options that's "on the table". While George Will tried in March of last year to say it was impossible ("They would fill 200,000 buses in a caravan stretching bumper-to-bumper from San Diego to Alaska…") I've got to say that it can't be impossible—how does Will think they got to the US in the first place? [Guard the Borders — And Face Facts, Too, By George F. Will, Washington Post, March 30, 2006]

For a discussion of how it is possible, check out these two VDARE.COM articles:

In any case, when an immigration enthusiast says "You can't deport twelve million people" or whatever number they're using for the number we need to ask them: "How many people would you be willing to have deported? One million? A hundred thousand? Even one?"

Anyone can see, for example, that it's easy to deport illegal aliens who are in prison. (I've sometimes thought that a couple of prisons should be built on the Mexican Border, with an entrance door in the US, and the exit door leading to Mexico. You could also build a much smaller one facing Canada, though Canadians don't contribute much to the convict population, and besides, I hope Conrad Black wins his case.)

But at the moment, not even these obvious cases are being deported.

Recently Patrick Frey, a prosecutor in Los Angeles County pointed out on his blog that "With sufficient resources, Los Angeles County could identify and deport more than 34,000 criminals a year who have been residing in the country illegally…"

But that's only if Los Angeles County would bother do the checking, and follow through with it.

That's all it would take—a decision to do it, and to follow through with it while ignoring the whining noise from La Raza and the ACLU.

So it might not be a good idea for Chingo Bling (contact his people) to taunt the Americans in this way. He might wake them up. When he says "They Can't Deport Us All", Americans can say, in the words of Cesar Chavez "Si, se puede!"