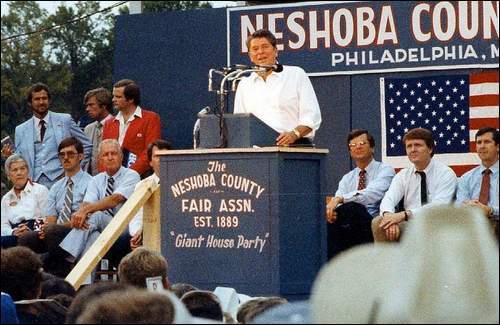 The Fulford File, By James Fulford | "They'll Think You're Signaling"! Dog-Whistles From Goldwater To Reagan To Palin

During the First World War, British author D. H. Lawrence and his German wife Frieda were staying  in Cornwall, on the south coast of England. Locals suspected them of espionage, and kept investigating them.

"Frieda remembered once sitting with Lawrence on the sea rocks feeling intoxicated by the air and sun. 'I had to jump and run, and my white scarf blew in the wind. "Stop it, stop it, you fool, you fool!" Lawrence cried. "Can't you see they'll think you're signaling to the enemy!"'?" [Living at the edge: a biography of D.H. Lawrence and Frieda von Richthofen, By Michael Squires, Lynn K. Talbot p. 184]

The Lawrences were not, in fact, guilty of espionage, although the authorities' suspicion was hardly unreasonable—Lawrence was an intellectual, a "bearded writer" who was "openly hostile" to the British war effort, and Frieda, of course, was Frieda von Richthofen, a native of Germany and (distant) cousin of the "Red Baron".

But I've often thought of that "they'll think you're signaling" thing when I look at VDARE.com's critics, and our reaction to them. Conservatives are always being watched, like the Lawrences, for signs of racism, radicalism, and inherent violence.

Take the proponents of the "dog whistle" theory. A political figure says anything, and critics add a racist interpretation—frequently made up out of their own heads—and assume that was the message. (See Glenn Beck, Jeffrey Goldberg, And The Dog-Whistle That Wasn't by Steve Sailer for an example.)

When President Obama told a direct lie in a speech to congress, and Congressman Joe Wilson shouted "You lie!" Maureen Dowd wrote in the New York Times "But, fair or not, what I heard was an unspoken word in the air: You lie, boy!" [Boy, Oh, Boy , September 12, 2009]

One of the earliest cases of this smear was in 1964, when Barry Goldwater was slimed by CBS reporter Daniel Schorr. Based on rumors of a vacation in Europe, and the fact that an American interview with Goldwater had been reprinted in Der Spiegel, Schorr called him a Nazi sympathizer:

"Schorr, at the time a CBS News correspondent, decided to inject some of his own fear-mongering into the campaign. On July 12, he reported that "it looks as though Senator Goldwater, if nominated, will be starting his campaign here in Bavaria, center of Germany's right wing"—which, Schorr provocatively added, was 'Hitler's one-time stomping ground.'"

Schorr also claimed that Goldwater, in an interview with Der Spiegel, had “appeal[ed] to right-wing elements in Germany,” and had agreed to speak to a meeting of “right-wing Germans.”

"Thus," Schorr ominously concluded, "there are signs that the American and German right wings are joining up."

This was all false, and CBS President William Paley actually made Schorr apologize on air. But when Schorr died, the New York Times treated it as a fact in his obituary [Times Treats As Factual Leftwing Veteran Journalist Daniel Schorr's Nazi Smear of Barry Goldwater, by Clay Walters, July 26, 2010].

The point of this kind of smear is to terrorize conservatives. Of course there's a double standard—John F. Kennedy went to Germany and stood at the Brandenburg Gate, shouting (in German!) defiance at the Communists, and nobody thought he was a Nazi, except maybe Lee Harvey Oswald.

Then there was Ronald Reagan's speech at the Neshoba County Fair in August, 1980. You will hear, over and over again, that Reagan went to Philadelphia, Mississippi, (partly at the behest of then-Congressman Trent Lott, another guy who said something that turned out to be "racist" after liberals and neoconservatives had interpreted it )and spoke about "States Rights" near the site of the murders of three civil rights workers, who had been murdered sixteen years earlier. In so doing, he was supposed to be sending a message to White Supremacists.

For a recent example, see Righting Reagan's Wrongs?, By Bob Herbert, NYT, November 13, 2007. For a fairly despicable example, see WALTER FIELDS: No tears for Reagan, BlackAmericaToday.com, June 8, 2004. (Reagan had died on June 5th.) And white liberals, are, if anything, even worse.

The Neshoba County Fair, where Reagan spoke, doesn't take place in Philadelphia, MS, either—there isn't room. Philadelphia is the county seat, and has about 7,000 inhabitants. The fairgrounds, in the hills seven miles from town, cover sixty acres.

The connection is entirely imaginary.

The speech Reagan made was not a "racist" speech, because Reagan wasn't a "racist"—he was as likely to make a "racist" speech as Goldwater, an American WWII veteran, was to pal around with German Nazis. (You can listen to Reagan's speech in MP3 form, or read the transcript.)

The reason that they say it's racist is because it mentioned "States' Rights" . And States' Rights is a phrase that makes liberals crazy. Recently the New York Times wrote "In the Tea Party's talk of states' rights, critics say they hear an echo of slavery, Jim Crow and George Wallace."[Where Dr. King Stood, Tea Party Claims His Mantle, By Kate Zernike, New York Times, August 27, 2010], inspiring me to write "There's a name for people who hear echoes like that–schizophrenic. How many of those people can get their echoes in the New York Times?"

Lee Stranahan, a liberal blogging at conservative site BigJournalism.com, wonders why there isn't more blogging about the Pigford settlement scandals.  (Is the Right Wing Blogosphere Afraid of Pigford?, January 26, 2010).

Well, the Right Wing bloggers probably are afraid to push Pigford (which VDARE.com been covering here since 2006)because everyone involved in the rip-off is black.

But that's not my point. Stranahan illustrated his story with a picture of three monkeys: See No Evil, Hear No Evil, and Speak No Evil. Now I know that these little guys are supposed to represent the (very largely white) "Right Wing Blogosphere". But I also know that that's no excuse.

Apparently Stranahan, with his progressive background, doesn't know what happens when you put a picture of a monkey in a story that involves African-Americans. Ask Sean Delonas, who put a story about a real monkey that ran amok in Connecticut in a cartoon about the Stimulus Bill, and got death threats.

Stranahan just hasn't been persecuted as much as we have.

This results in a lot of self-censorship, even around here, where you wouldn't expect it to be found. For example, this is the first paragraph of Pat Buchanan's January 24, 2011 syndicated column And the Debt Bomb Ticks On:

"With his approval rating moving up to 50 percent and higher in some polls, the pundits are all agreed. President Obama has turned the corner. He is now the winter-book favorite in 2012."

I thought of changing Pat's headline to Obama Gets His Mojo Back…And the Debt Bomb Ticks On, to make it more specific. But then I thought "Mojo? Can I say Mojo? Could they think…"

So I left it out.

"This, more than anything else, is why the idea of an Obama presidency makes me nauseated. Every time he gets criticized (and sometimes when he's complimented) will be another occasion to agonize over the possibility of latent racism in the remark. Thus the well of public discourse will be even more poisoned than before."

He was right. It is.

However, there's a lot of freedom in not worrying about that kind of thing any longer. They're going to say it anyway. There is nothing you can do to stop them saying it. If little things like Goldwater desegregating the Arizona National Guard, or Goldwater fighting for years on the American side in World War II couldn't stop Schorr from calling Goldwater a Nazi, what can we do?

We can ignore them—that's what. We can tell the truth as we see it, without worrying too much about who it offends.

Sarah Palin did a good thing when she fought back against the smears that hit her after the attack on Giffords—particularly when she told the press they were committing a "blood libel."

That was immediately and repeatedly called a "dog-whistle", although there was some dispute as to who it was addressed to. But it's obviously true that the Left was insistent that Palin had blood on her hands, as a previous generation had insisted that Reagan was somehow responsible for murders committed by the Ku Klux Klan, and an earlier generation than that had insisted that Major-General Barry Goldwater, USAF, (Reserve) was somehow a Nazi.

Palin refused to take it. Neither should we.