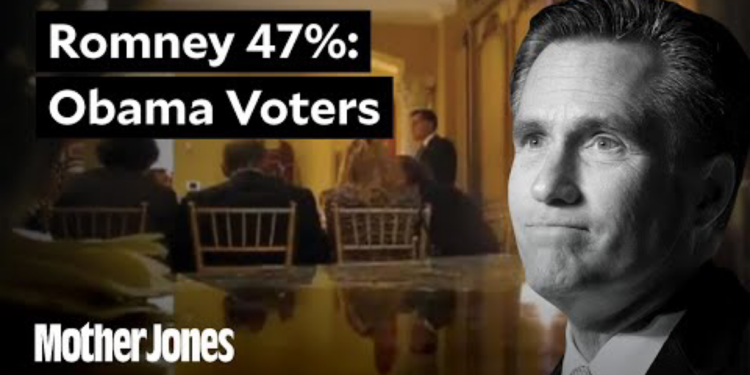 In the 1927, leftwing black poet Countee Cullen wrote a poem called "For a Lady I Know.” The “lady” would have been a white stay-at-home mother, or if older, a “clubwoman” supported by her husband or by inherited wealth—employing African-American (she, and they, would have said “colored”) servants.

She even thinks that up in heaven
Her class lies late and snores
While poor black cherubs rise at seven
To do celestial chores.

Today, that lady’s granddaughter may be a lawyer or a stockbroker in her own right—which means that she rises at seven to go into the City and earn the money that supports—certain people who lie late and snore. (Her servants, if any, are likely to be Hispanic.)

This is political—and the unmentionable racial—reality behind Mitt Romney’s famous remarks, secretly recorded at a private fundraiser and released by Mother Jones in defiance of the rules that the Left enforces on e.g. the late Andrew Breitbart’s  investigation of Shirley Sherrod and others. Romney pointed out, in effect and approximately, that the United States consists of two nations: in effect, Makers and Takers. (Not his phrase—but “Welfare Queen” wasn’t Reagan’s phrase either, just a Main Stream Media summary/ caricature. See “Rivers of Blood”).

“There are 47 percent of the people who will vote for the president no matter what. All right, there are 47 percent who are with him, who are dependent upon government, who believe that they are victims, who believe the government has a responsibility to care for them, who believe that they are entitled to health care, to food, to housing, to you-name-it. That that's an entitlement. And the government should give it to them. And they will vote for this president no matter what…These are people who pay no income tax.”

Romney went on:  “[M]y job is not to worry about those people. I'll never convince them they should take personal responsibility and care for their lives."[Links added by VDARE.com]

SECRET VIDEO: Romney Tells Millionaire Donors What He REALLY Thinks of Obama Voters | When he doesn't know a camera's rolling, the GOP candidate shows his disdain for half of America, Mon Sep. 17, 2012 [Full transcript]

Nevertheless, Romney’s summary has resulted in a lot of huffing and puffing from both Left and (mostly neoconservative) right (mostly caused by willful misunderstanding of "[M]y job is is not to worry about those people” which referred to Romney’s role as candidate, not his intentions as President).

The core of the poor, non-working Takers are minorities—some of them imported, illegal, minorities and their anchor-baby children. The core of Makers—the 53 percent of Americans who are paying for everything—are  white.

By the way, I probably don’t need to prove that welfare recipients are disproportionately black and Hispanic,  since criticism of welfare is considered racist,  but there's a myth, shared even by some conservatives that the majority of welfare recipients are white. (See National Review Wrong (Again) On Race And Welfare.)  Just to give one example, the Department Of Health And Human Services says

In the Atlantic Magazine, African-American blogger Ta-Nehisi Coates (pictured right) whom no one can accuse of being color-blind, identifies criticism of either Obama or the poor as racist.

Coates quoted Pat Buchanan, who said on Fox News that "Barack Obama is a drug dealer of welfare. He wants permanent dependency, in my judgment, of all these folks", and wrote that

“Calling the first black president a ‘drug dealer of welfare’ is interesting because it actually is Buchanan deploying symbolism. The problem is that the world has changed, and this is precisely the kind of rhetoric that would end a presidential candidacy today.”

Let’s get this straight:

(This can’t be proved, but a member of Hillary Clinton’s campaign staff was forced to resign for suggesting it. See Hillary's Obama Drug Smear—Clintonian Lie, Or…Does She Know Something?, by Patrick J. Buchanan, December 17, 2007.)

Peter Brimelow wrote in 1995  that  the new definition of “racist” is “anyone who is winning an argument with a liberal.”(Or a libertarian, and “even some confused conservatives."

Well, now it’s “anyone who is winning an argument the first black president.” Because Obama used drugs, looks like a drug dealer, and may have dealt drugs, it is now impossible to suggest that free money is addictive, and that Obama is pushing it.

The Southern Strategy is often conceived as magic. I would argue that it is better conceived of as another engagement during white supremacy's fighting retreat into oblivion. The "symbols" argument can only work until people decide that the deploying of symbols is, itself, racist. I know people think that Republicans have avoided the Rev. Jeremiah Wright attack out of the goodness of their heart. I would argue that they've avoided it because they (correctly) understand that it would be poisonous to them. [Links added by VDARE.com]

It’s the soft bigotry of low expectations, and McCain is guilty of moral cowardice.

And by “white supremacy” Coates simply means whites, who are a majority, voting for white interests—the way blacks do.

That’s what’s at stake—not in the election, but in the culture.

Coates gets a platform at the Atlantic to say that GOP is a white supremacist party, because it is a white party.

We at VDARE.com get to do guerilla fundraising appeals to make the simple point that perhaps the GOP should show some consideration for its actual, you know, voters.