You've heard over and over about how the 1977 Community Reinvestment Act (CRA) could not bear any blame for the mortgage meltdown that began in 2007 because the time lag was too vast. As the New York Times editorialized on October 15, 2008: "First, how could a 30-plus-year-old law be responsible for a crisis that has occurred only in recent years?"

That seems like a good question. Three decades is a long time.

Last Thursday, though, I found an eye-opening graph of cumulative Community Reinvestment Act promises by banks from 1977 through 2005. According to the September 2005 report CRA Commitments by the National Community Reinvestment Coalition (NCRC), which bills itself as "the nation's economic justice trade association of 600 community associations:" When measured in terabucks, the Community Reinvestment Act was negligible until the 1990s. And it was still small potatoes until the Clinton "reforms" of 1995 and the rise of well-organized pressure groups of the kind affiliated with the NCRC.

But the biggest flood of CRA assurances came during the presidency of George W. Bush, who repeatedly called in 2002-2004 for 5.5 million more minority homeowners by 2010. Cumulative bank pledges (typically doled out over ten years) grew from $1.85 trillion in 2002 to $4.20 trillion in 2004.

Indeed, total CRA commitments increased by $1.63 trillion in 2004 alone, the first year of the Housing Bubble.

For the benefit of overseas readers for whom the words "billion" and "trillion" mean different things than they do for American readers, let me spell that last bit out as if I was writing it on a check. In 2004 alone, banks publicly promised to lend over the next decade to CRA-qualified minority and lower income neighborhoods the sum of $1,630,000,000,000.00.

And those kind of numbers put a lot of upward pressure on home prices as they got incorporated into expectations. Not surprisingly, the subsequent mortgage defaults that plunged the world into economic crisis are disproportionately concentrated in CRA-covered minority and lower income communities.

Using the NCRC's data, I created this more readable graph to show CRA agreements by year from 1977-2004: 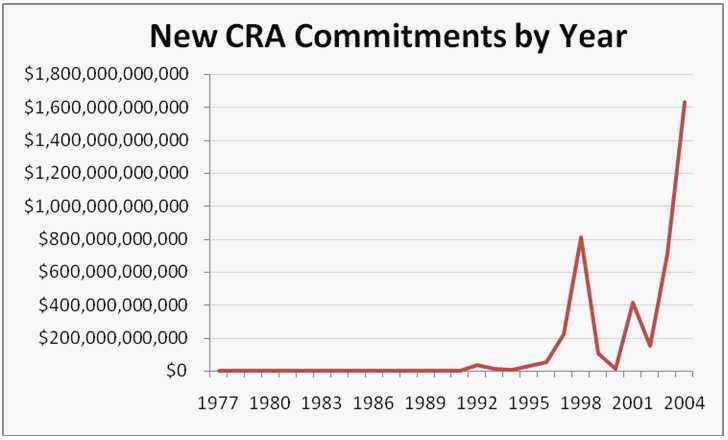 The CRA gives community organizers leverage over banks primarily when they request federal regulatory approval to merge. As the NCRC explains:

1998 was a year of mega-mergers that included the Bank of America and Nations Bank merger as well as Citigroup's acquisition of Travelers; CRA pledges totaled $812 billion dollars as a result. … CRA pledges shot up again in 2003 and particularly in 2004. The year 2004 experienced watershed mega-mergers as Bank of America acquired Fleet, JP Morgan Chase acquired Bank One, and Citizens gobbled up Charter One.

Some of the $4.2 trillion in the NCRC's tabulation is no doubt double-counted. For example, WaMu shows up three times in the list of CRA commitments:

So WaMu accounts for $570 billion in the NCRC's list of pledges, but if you prorate the various amounts, it's really more as if WaMu promised, say, $418.5 billion over 14 years.

Nevertheless, despite the NCRC's double-counting, much is left out of its $4.2 trillion figure too. For example, CRA commitments have continued since NCRC's 2005 report. In 2008, Bank of America, another walking undead Red Ink Giant, pledged $1.5 trillion in CRA lending to get federal approval for its purchase of Countrywide Financial.

In case you are wondering, the $4.2 trillion number does not include the trillions targeted by Fannie Mae and Freddie Mac to buy up minority and lower income mortgages on the secondary market.

Please keep in mind, as I explained two weeks ago in VDARE.com, that the CRA didn't hold a gun to the head of Kerry Killinger of WaMu or Ken Lewis of Bank of America and force them to lend hundreds of billions to likely deadbeats.

No, the CRA has contributed to the mortgage disaster through a more subtle "selection effect".

Assume there are two distinct kinds of bankers:

Of course, there are always a lot of people in the middle without strong opinions who will go with the flow toward whichever camp seems to be gaining in money, power, and popularity.

If you were a Pessimist who didn't believe that the government's favored borrowers were likely to pay their mortgages, the CRA couldn't make you lend to them. But if you didn't play ball with the CRA, you couldn't buy other banks, which is the easiest way for a bank to get big.

And the CEOs of big banks get paid more:

" 'There continues to be a high correlation between CEO compensation and bank asset size, and no correlation with three-year [earnings-per-share] growth and shareholder returns,' Citigroup banking analyst Ruchi Madan wrote in a May 6, 2005 report on bank executive pay."[Are reforms working? Experts say link between pay, performance is lacking, By Len Boselovic, Pittsburgh Post-Gazette, May 15, 2005]

See how it works?

Not surprisingly, over the years the CRA's chokehold on mergers changed the culture of banking. The most powerful and highest paid executives publicly saluted the CRA, while the CEOs who thought it was politically correct nonsense were relegated to the sidelines in the great game of mergers and acquisitions.

The optimists who agreed with Presidents Clinton, Bush, and Obama that "underserved" minorities would somehow come up with the scratch to pay off their mortgages were allowed to build empires, while the pessimists were not. Those in the middle camp went with the flow and started believing the CRA propaganda.

Q. Whom do we want to win: the Optimists or the Pessimists?

A. Neither! We want a financial system in which the realists succeed and wind up in positions of power. Whether the realists will turn out to be this moment's Optimists or the Pessimists is not something we should decide ahead of time.

But, that's exactly what the Community Reinvestment Act does. It puts the government's thumb heavily on the scale on the side of the Optimists, with, as we've seen, catastrophic results.

It's time to repeal the CRA.

And it's long past time to recognize the reality of human differences.

"Not for the first time, our public class's refusal to think rationally about race and ethnic differences had resulted in bad—in this case, catastrophic—public policy."

But even I didn't realize our public class's dogma was about to bring down the entire world economy.

The bottom line: in the words of science fiction writer Philip K. Dick:

"Reality is that which, when you stop believing in it, doesn't go away."