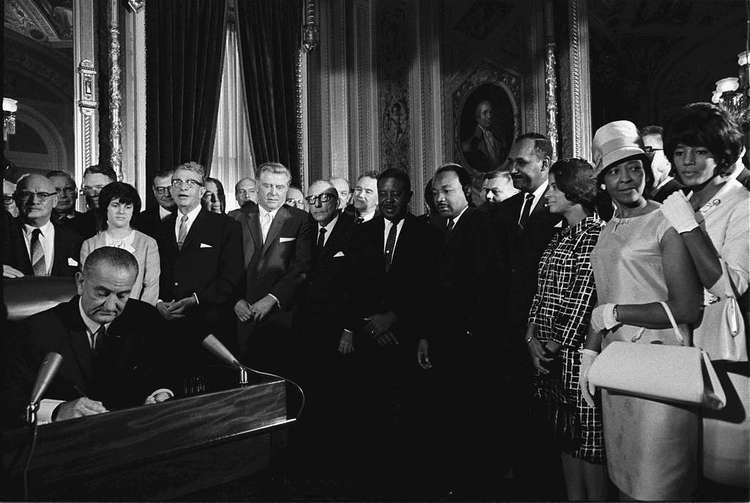 The Voting Rights Act: Time To Include Whites

"President Bush asked Congress Thursday to renew portions of a landmark voting rights act as he signed a measure championed by Rep. Jesse Jackson Jr. (D-Ill.) to erect a statue of civil rights icon Rosa Parks in the Capitol. Jackson and his namesake father have been campaigning for months to extend and strengthen key provisions of the 1965 Voting Rights Act due to expire in 2007." Rosa Parks statue to stand in Capitol  (December 2, 2005 By Lynn Sweet Chicago Sun-Times

The voting rights of American citizens are being trampled. But you can be sure that the next version of the hallowed Voting Rights Act will only address pseudo-problems.

It wasn't always this way. As Thomas Sowell has pointed out, the 1965 Voting Rights Act was the most successful of the famous civil rights enactments of the 1960s. It dealt with a genuine issue—the systematic finagling by the ruling Democratic Party in Southern states to keep most black citizens from voting—and solved it almost immediately.

As soon as blacks had the vote, they were well equipped to protect that right. The number of black voters and officeholders shot upwards. White Southern politicians, such as George Wallace, responded to the now-level electoral playing field by dropping anti-black demagoguery.

The calm, prosperous modern South soon emerged, with the black minority dominating the Democratic Party and most of the white majority moving into its natural home in the Republican Party. Under this fair system, conservatives do well in the South.

Today, when you hear about blacks having problems at the election booth, as many did in trying to cast valid ballots in the 2000 Presidential election in Florida, they are almost always self-inflicted.

The 2000 Presidential election in Florida has become encrusted in myths ("Blacks were disenfranchised!") because what really happened stems directly from the media's Great Unmentionable: the white-black IQ gap.

In Florida, more Gore supporters showed up to vote than Bush supporters. But as so often happens, the Democrats botched up their ballots, rendering them invalid, at a higher rate than the Republicans. Most unmentionably, Gore's biggest problem was that blacks, who voted for him by at least a 10-1 margins, were much more likely to make a hash of their ballots than were whites, who tended to support Bush.

La Griffe du Lion's analysis is conclusive, but this New York Times article at least hints at the truth:

"JACKSONVILLE, Fla., Nov. 16 [2000] — … But the results of Duval County's vote left Democrats here shaking their heads. More than 26,000 ballots were invalidated, the vast majority because they contained votes for more than one presidential candidate. Nearly 9,000 of the votes were thrown out in the predominantly African-American communities around Jacksonville, where Mr. Gore scored 10-to-1 ratios of victory, according to an analysis of the vote by the New York Times…

"Local election officials attributed the outcome to a ballot that had the name of presidential candidates on two pages, which they said many voters found confusing. Many voters, they said, voted once on each page. The election officials said they would not use such a ballot in the future.

"Rodney G. Gregory, a lawyer for the Democrats in Duval County, said the party shared the blame for the confusion. Mr. Gregory said Democratic Party workers instructed voters, many persuaded to go to the polls for the first time, to cast ballots in every race and 'be sure to punch a hole on every page.'

If Mr. Gregory's assessment is correct, and thousands of Gore supporters were inadvertently misled into invalidating their ballots, this county alone would have been enough to give Mr. Gore the electoral votes of Florida, and thus the White House.

Yet the Voting Rights Law still assumes that Southern whites are guilty unless proven innocent. Suzanne Gamboa of the Washington Post reported in a December 3 2005 story about the current brouhaha over the Republican redistricting of Texas that:

"The House Democratic leader wants an independent inquiry into the Justice Department's decision to approve a Texas redistricting plan that staff lawyers concluded diluted minority voting rights… Because of historic discrimination against minority voters, Texas is required under provisions of the Voting Rights Act of 1965 to get Justice Department approval for any voting changes to ensure they don't undercut minority voting."

My emphasis! That "discrimination" is "historic" all right—1965 was 40 years ago! [Vdare.com note: Abigail Thernstrom and Edward Blum argue that Texas never needed the VRA, anyway. In 1937 one-sixth of the registered voters in Dallas were African-American.]

You'll notice that the law doesn't require fairness to all races, just to nonwhites. Over time, the inevitable net effect of that bias will be to push voting systems in the direction of unfairly favoring nonwhites.

Imagine trying to drive your car down the highway with your steering wheel rigged so you can't nudge it to the right but can nudge it to the left. Eventually, you'll end up in the ditch on the left.

Yet the GOP has been a big supporter of recent Voting Rights Acts. They favor drawing district lines that favor the election of minorities.

Why? Because concentrating anti-Republican minorities into a few "majority-minority" House and legislative districts in each state also helps create a lot of safe Republican districts (for now).

The downside: minority politicians get radicalized. This has ominous consequence for the long-term cohesiveness of America.

Due to this gerrymandering to create black districts, a large fraction of black politicians now run in black-majority districts. They learn to harvest votes by pandering only to black resentments of whites.  This is terrible preparation for later running for statewide office, where they have to avoid frightening whites to win.

Which accounts for their miserable statewide performances. Although 39 of the 435 members of the House of Representatives are black, of the 150 U.S. Senators and state governors, only one is black (the café-au-lait Barack Obama, whose mother is white, late father, who abandoned the family when he was two, Kenyan, and whose upbringing was more Indonesian than African-American.)

Less widely-noted: this system funnels ambitious Hispanics into the Democratic Party. Nationwide, 92 percent of all Latino elected officials who ran under a partisan label are Democrats, in large part because Hispanics are clumped together in "majority-minority" districts. For example, in California, Hispanics hold 29 of the 120 seats in the two houses of the legislature, and 27 of the 29 are Democrats.

What America needs instead of a same-old-same-old Voting Rights Act that ignores non-minority rights is comprehensive reform to ensure the rights of all citizens.

With the computer technology available today, state legislators are able to gerrymander districts boundaries to protect incumbents, both themselves and House members, in ways beyond the fondest dreams of old time political bosses. For example, due to gerrymandering, no incumbent legislator in California lost in 2004—even the ones targeted by Governor Arnold Schwarzenegger, then at the peak of his popularity.

In the past, with districts less scientifically drawn, representatives felt the need to be on the right side of public opinion. Today, however, most incumbents assured of endless re-elections—unless the public's passions are extremely stirred up.

So our representatives have become cowardly and don't want to take a stand on controversial issues. That's a major reason why Congress hasn't carried out its Constitutional duty to declare war since the 1940s—the kind of crucial vote, incumbents worry, for which the electorate might hold them responsible. It's safer from a career standpoint to simply delegate decisions about war or peace to the President.

Today, the vast majority of House races are effectively decided when district boundaries are redrawn following each decennial Census. Only the small fraction of the electorate's votes that are in swing districts can really make a difference in House elections.

In most states, House and legislative districts are drawn up to equalize not the number of citizens eligible to vote, but the number of residents—including both illegal and legal aliens, and their children.

This gives Hispanic Democrats a huge advantage. Their ethnic group is heavily immigrant, and ineligible to vote. But their presence in Hispanic-dominated areas translates into safe seats.

Overall, the eight California congressional elections won by Latinos averaged only 80,000 ballots split among all the hopefuls. In the other 45 races, a mean of 143,000 voters went to the polls.

This meant that the average voter in a district that elected a Latino had a 78 percent greater say in choosing a House member than voters in the rest of the state.

Rotten boroughs aren't Constitutional, according to the highest court to consider the issue. In the majority opinion of the 1998 7th Circuit federal case Barnett vs. City of Chicago, famed Judge Richard J. Posner ruled:

"We think that citizen voting-age population is the basis for determining equality of voting power that best comports with the policy of the (Voting Rights) statute. ... The dignity and very concept of citizenship are diluted if non-citizens are allowed to vote either directly or by the conferral of additional voting power on citizens believed to have a community of interest with the non-citizens."

It's time for a Voting Right Act that guarantees the equal treatment of all American citizens—and doesn't just benefit minorities and incumbents of all parties.