VDARE.com Editor Peter Brimelow writes: Last week we posted “It Will Only Take One Election”—The Trump Tsunami vs. Clinton’s Coming Merkel-Style Immigration Surge, adapted from my address to the American Renaissance Conference, May 21 2016. This article is adapted from the subsequent Question and Answer session.

My talk’s title, of course, was a celebration by me of my prediction at the 2015 AmRen Conference that surfacing the immigration issue “would only take one speech.”

One of my 2016 predictions that has already been born out: “There is going to be a hell of a fight here. Because what Sam Francis used to call “The Evil Party” is determined to suppress this Trump movement with whatever method it can.” This explains the current orchestrated hysteria over Trump’s entirely reasonable questioning of the objectivity of the “Wise Latino” judging the Trump U. case—but not, completely, why the Stupid Party has allowed itself to be stampeded too. My advice to immigration patriots (and Trump, not that he needs it) is the same as Kipling's: keep your heads.

Q: If Donald Trump does get elected, he’s going to have to surround himself with people that know these policies. What cabinet positions do you think are the most important?

PB: I would like him to make Kris Kobach, the Secretary of State in Kansas, his vice presidential nominee. Kobach is deeply involved in the immigration issue on the national level and he has litigated it nationally, at the Supreme Court and so on, for 10 years. He is really up to speed on the issue. He has tremendous academic qualifications, which always impresses the Main Stream media, and he’s two inches taller than Donald Trump so it would be very interesting on the podium!  Trump could also make him Secretary of the Interior, Attorney General, and so on.

[PB: Hmm need to assign an article on this to Washington Watcher!!]

Q: One of the bigger challenges that I see is that we can patrol borders and put walls up, but we’ve forgotten who we are as a nation. My oldest daughter was taught recently in school that we have no right to New Mexico, Texas, Arizona, California.

Now, I have no problem giving back California! [Laughter].

PB: Well, I have a problem giving back California! My son was in the Marines at Camp Pendleton, he still lives there! [laughter]

Q: But even if we deal with folks coming across the border, at what point in time do we take back our education system? At what point can we get teachers to stop teaching Howard Zinn and go back to who we are as a nation, what our principles are?

PB: Can I ask you what state you live in?

Q: I live in Virginia. My eldest daughter, unfortunately, is living in Connecticut.

PB: Just like I am! So which state was it where she was taught this?

In my speech here last year, I discussed at some length what I thought Americans should do if immigration is not stopped. And one of those things is that I think we are going to have to give up on public education. [Applause]. Public education, like socialism in general [and an impartial judiciary], really only work when you have a homogeneous society that agrees on things. If you want to rescue the Historic American Nation from what is happening here, it is going to have to be allowed to form its own institutions. 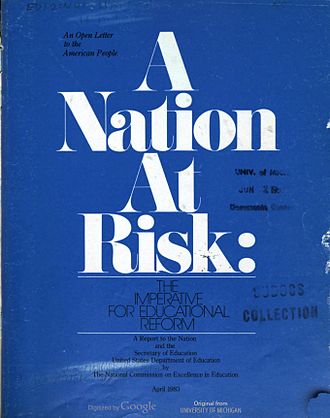 I do think, however, that a Trump Administration is capable of doing all kinds of things that could change the tide. I’ve actually written a lot about education over many years; when I was at Fortune in 1983, I wrote a long cover story, which caused a big stir actually, because Reagan had appointed a no-good Secretary of Education [Terrell Bell] who maneuvered against abolishing the Department Of Education, which should have been done. But he did commission this report about educational performance, I think it was called A Nation at Risk, and that caused a huge uproar and it was a heavy hit to teachers’ unions.

So there’s a lot of stuff that can be done if you control the federal government. You can send a lot of messages and get a lot of people to fall into line.

Q: If Mount America blows, so to speak, and regains control of its immigration policy and its destiny, what do you think that will mean for our ancient historical homelands in Europe and Britain, and our colonies, such as New Zealand or Canada, where I am from?

PB: You are from Canada?

PB: My first wife was a Newfoundlander and I lived in Canada for many years.

You can say, actually, that Canada invented all modern political diseases. There’s Official Bilingualism, of course. And when I was there in the 1970s, they were just getting to work on “multiculturalism,” which is a way of displacing the historic Canadian majority from control of its state.

I think that America is the center of the world. American politics is the Greatest Show On Earth. The entire world is watching. If Trump wins this election, it is going to send absolutely tremendous messages everywhere. [Applause]

I think that a lot of politicians, people, will come out of the woodwork all over the world. Because this stuff, mass Third World immigration, is not popular anywhere, you know.

What this also means is that there is going to be a hell of a fight here. Because what Sam Francis used to call “The Evil Party” is determined to suppress this Trump movement with whatever method it can. And that’s why so many of you here today are here anonymously.

It will be a hell of a fight. But if Trump wins, it’s going to turn around quickly.

Q: Assuming that Donald Trump wins not only the election, but then goes on to complete all of the immigration policies in terms of wall, mass deportations, etc., what then can you do to reverse the demographic trends? How do you rebalance the fertility rates of ethnic minorities in the U.S. or encourage the ethnic whites to have more children?

Brimelow: We’ve run a lot of numbers on this, and even if there isn’t an immigration moratorium, if the GOP—or more accurately the Generic American Party—follows the course I suggest and rallies the white base, because the electorate is going to remain disproportionately white long after the population is disproportionately non-white, it can keep control. And then it can do a lot of things.

But, I think it’s also going to take a very self-conscious effort aimed at defending the Historic American Nation’s cultural traditions. I didn’t mention the Confederate flag in my talk today, and Trump doesn’t mention it either—partly, I think, because he’s does think he’s going to get some black votes and he figures that he's annoyed quite enough people already!

But in the end, this idea that this component of the American nation can’t fly its own flag—it’s the flag of the White South, get used to it [applause]—that’s going to have to be taken head-on.

I’ve had two Irish wives—my first wife died. So I’ve had to go to a lot of St. Patrick’s Day parades. They fly the Irish Tricolor and have all sorts of nasty signs about the English. 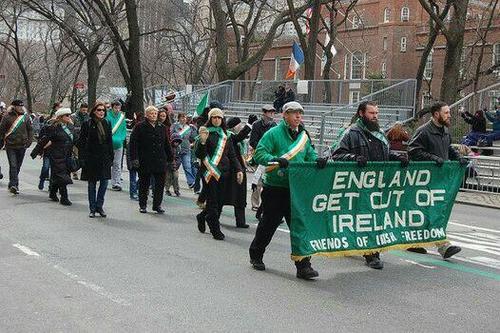 Tricolors specifically celebrate revolutions. And that failed revolution, that attempted coup, the Easter Rising, occurred at the height of the First World War when Britain was fighting for its life. And these Irish nationalists, these Republicans, tried to stab it in the back even though there were vast numbers of Irish volunteers fighting and continuing to fight for the British Empire.

I don’t like that. But I accept it because I understand that Irish Americans are a part of what makes up America.

And, I think everyone is going to have to accept the White South. [Applause]

VDARE.com Told You So Dept.Donald Trump InsurgencyGOP Share Of The White Vote
<< Previous
Next >>
LATEST