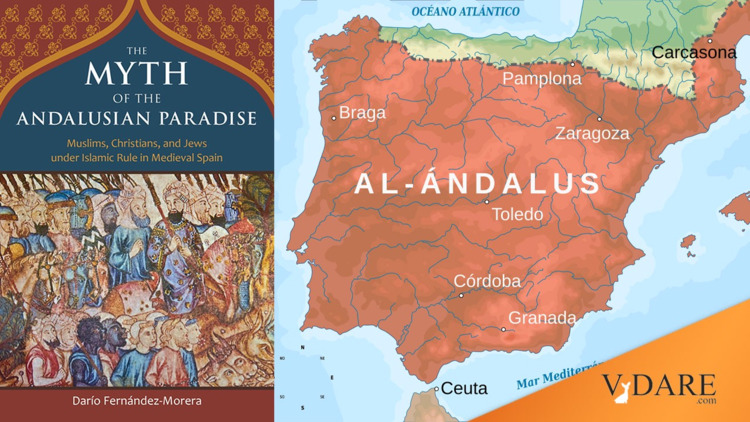 Why The Left Promotes The Myth Of The Andalusian Paradise

The Spanish territory known as Al-Andalusia under Muslim control (711-1492) is widely touted in academe and the Main Stream Media as a paradise of multicultural tolerance. Of course this is a lie, as Dario Fernández-Morera’s book  The Myth of the Andalusian Paradise: Muslims, Christians, and Jews under Islamic Rule in Medieval Spain makes devastatingly clear. Al-Andalus was simply another chapter in the vicious history of Muslim subjugation of Europeans and Christians. It’s critical for immigration patriots to stamp out this lie because it is being used to justify the replacement and eventual extinction of our own civilization. As Fernández-Morera reminds us, this has all happened before. 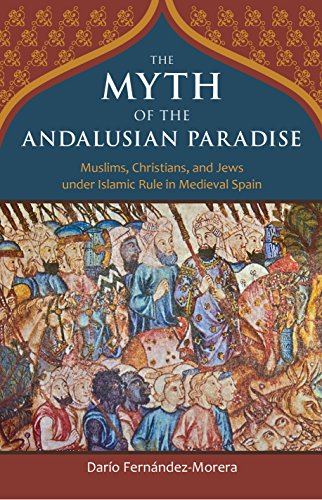 The myth of Andalusia has become integral to the project of The Great Replacement:

Narrative control is fundamental to nationhood. Ethnic kinship is necessary but not sufficient. Challenging the fundamentals of national identity is subversion in the deepest sense. In America today, there are diametrically-opposed visions: the traditional story of American settlement and expansion vs. the progressive vision of America as a “crime scene,” according to “our” vice president [For Kamala Harris, America Is the ‘Scene of a Crime,’ by Gregory Hood, American Renaissance, February 22, 2019]. This ideological conflict is driven by demographics even as it facilitates future demographic changes, specifically mass Third World immigration.

Back in 2002, speaking of what has happened in the United States, the late Sam Francis argued:

What is happening or has happened in almost all these instances is that the common cultural and political framework that enabled racially conscious whites to deflect non-white drives for power has eroded or vanished entirely. Its erosion has come about in large part because of its deliberate subversion by its enemies (not always for racial purposes), while at the same time the emergence of explicitly non-white racial consciousness and the political unity this subversion generates has rendered appeals to traditional white values and institutions ineffective. When blacks themselves regard Washington, Jefferson, Jackson, and even Abraham Lincoln as well as all other early American icons as mere bigots, slaveholders, and white supremacists, when they dismiss the Declaration of Independence and the Constitution as fraudulent documents that merely empowered racial oppression, then political dialogue and a shared political culture cease to be possible — unless whites themselves give up these icons as well, which is what seems to be happening.

Every nation has a core story it tells about itself, that defines itself and gives it a mission, a role, and a destiny. But as Western Civilization continues its decline, we see new Narratives emerge. New political orders define and justify themselves as the direct repudiation of what came before. We already saw this in South Africa and we see it in America today [State Conquest in South Africa Today; America Tomorrow, by Gregory Hood, American Renaissance, April 5, 2019].

Spain has not been exempt, with Leftists and Muslims arguing that the Reconquista that won the country back for Christianity must be jettisoned from Spanish identity, especially because patriotic parties like Vox are now appealing to its memory. “Although these cultural rituals are thought to commemorate a strife from a by-gone past,” moans Flora Hastings in the New Internationalist, “Vox’s dogwhistle calls for a new Reconquista casts these cultural rituals in an even darker light, further entrenching the idea of Muslims as antithetical to ‘Spanishness’” [The New Spanish Islamophobia, April 26, 2019].

Any Spaniard, any European, and any Westerner must simply respond that Muslims are indeed antithetical to Spanishness. The spirit of Reconquista is needed now more than ever. Hasting’s scare quotes about the very idea of being Spanish proves it.

The traditional history of Spain is as a Catholic kingdom made up of smaller kingdoms that heroically launched the Reconquista and drove back the Muslim invaders and occupiers. From there, the conquistadors discovered, explored, and ultimately ruled much of the New World, being the first who established a permanent outpost of Western Civilization in the ruins of the savage empires they destroyed.

Not surprisingly, each pillar of this national story is being dismantled—a process that may start with the desecration of Francisco Franco’s tomb but ultimately ends with Christopher Columbus and the Reconquista itself [Why Spain Was Long In Denial About Franco–And Still Stands By Columbus, by Jon Lee Anderson, New Yorker, November 2, 2021].

The Myth of the Andalusian Paradise shows that, from the beginning, the Muslims invaders set about destroying a “nascent civilization,” a post-Roman, Christian culture now almost forgotten by history:

Islamic historians attest to the iconoclastic zeal of early Umayyad rulers, such as Abd al-Rahman I. According to the historian al-Razi, this leader was ruthless against the ‘polytheists,’ as Christians were called: ‘He would take all the bodies which Christians honor and call saints [probably a reference to relics], and he would burn them, and he would burn their beautiful churches; and in Spain there were many and very magnificent churches, some built by the Greeks and some by the Romans. Seeing this, the Christians, when they could, would take their sacred things, and would flee to the mountains. [78]

Christian elites met Muslim invasion with various approaches, including collaboration for short-term advantages. However, ultimately the Christian culture was stamped out and conquered. Hispano-Romans and Visigoths yielded to the new “hegemonic” culture. A key part of the conquest consisted of destroying or reconsecrating sacred buildings. As Fernández-Morera notes, destroying another culture’s symbols is one of the most powerful ways to secure an occupation. (The contemporary significance of this should be obvious.)

While some Christians were offered the chance to convert, the parasitic nature of Muslim conquest discouraged it on a universal scale. After all, if Christians all converted to Islam, they wouldn’t have to pay the submission tax “off which Muslims were supposed to live indefinitely.”

The Myth of the Andalusian Paradise goes into great detail about one of the things most Western historians now tend to be quiet about: Muslim enslavement of Europeans. This could prove controversial, not because any established academics care about whites, but because the Muslims valued black slaves less:

White slaves, especially blond ones, often captured in raids of Christian lands, were the most prized. In the year 912, during the Islamic Golden Age of Umayyad Caliphate of Cordoba, the price for male black slave was 200 dirhems [coins] of silver. A black girl from Nubia went for 300 dinars of gold. A white girl without education cost 1,000 dinars of gold. A white girl with singing abilities cost 14,000 dinars.

There was some nonviolent Christian resistance to this occupation, including accepting martyrdom. However, author Fernández-Morera notes that academics generally don’t frame this as

…understandable and courageous instances of passive, nonviolent cultural resistance by members of a disempowered and marginalized group, as academics would probably characterize similar acts by any subject group but Christians.

Instead, Christian martyrs are characterized as fanatics or “an intransigent minority.”

Jews also weren’t exempt from Muslim subjugation. While some Jewish leaders made mutually beneficial arrangements with Muslim administrators, the larger community wasn’t much safer, with Muslim conquerors occasionally so ferocious towards Jews that some defected to the Catholic kingdoms. Some Jews didn’t just settle but fought in the armies of the Christian kingdoms.

It's hard to avoid the conclusion that the myth of Al-Andalus is being promoted today because it prepares us for our future status as dhimmis. Fernández-Morera’s makes a startling comparison that Leftists may find embarrassing:

[A] basic fact is lost in discussions and arguments about the details of the life of the Christian dhimmis of Spain, the so-called Mozarabs, and about how much or how little they benefitted from Islamic ‘toleration‘–namely, that they were by definition a subaltern group, a fourth or fifth-class marginalized people in a hierarchical society, and that they were the victims of an extortion system, the dhimma, that gave them the choice that gangsters give to their victims: pay to be protected, or else. Therefore, saying that the Christians might be ‘content‘ with their status in Spain, Greece, or elsewhere under medieval Islamic rule is even more preposterous than saying that American blacks might be ‘content‘ with their second-class citizenship under the tolerant white hegemony in certain areas of the United States prior to the twentieth-century civil rights movement, or perhaps even with their treatment by slave owners in the American South before the War of Secession, who often ‘made them part of the family.‘ In fact, as the nomenclature described by the historian Ibn Hayyan of Cordoba indicated, Christians were at the bottom of a stratified Islamic world, where Arabs occupied the top, followed by Berbers, then by freed Muslim white slaves, and finally by muladis (converts), who were further divided into first-generation converts and the rest.

There is a curious spirit of self-exaltation and self-hatred among white Leftists that is best termed a pathology. To such people, submission might be preferable to suffering the burden of white guilt. They may also secretly (or not so secretly) yearn to wield power over other members of their community, especially if a member of a racial/religious outgroup is ultimately in charge.

The Myth of the Andalusian Paradise isn’t just an enlightening read. It’s a question and a challenge to Americans and those of the West around the world. Will we become a “people of submission” like those who lived under the Muslim yoke in Al-Andalus? Or will recapture the spirit of Reconquista?

Whether or not we have a future depends on the answer.

James Kirkpatrick [Email him | Tweet him @VDAREJamesK] is a Beltway veteran and a refugee from Conservatism Inc. His latest book is Conservatism Inc.: The Battle for the American Right. Read VDARE.com Editor Peter Brimelow's Preface here.