Yes, Virginia (Dare) There Is A Cultural Marxism—And It’s Taking Over Conservatism Inc.

The most recent incident of Cultural Marxist commissars refusing to admit that dissidents are to be treated as fellow citizens is the crazed female professor who accosted the NPI's  Richard Spencer while he was exercising at a Alexandria gym. She, recognizing him from coverage of the election campaign, started haranguing him and calling him a  “Nazi.”

Instead of having her ejected for this behavior, the gym’s management terminated Spencer’s membership. [Georgetown professor confronts white nationalist Richard Spencer at the gym — which terminates his membership , By Faiz Siddiqui May 21, 2017]

Back in 2011 VDARE posted a commentary of mine on the legitimacy of the “Cultural Marxist” concept. (I reluctantly accepted the term only because I couldn’t think of a better one.)

As I pointed out, this ideology was very far from orthodox Marxism and was viewed by serious Marxists as a kind of bastard child. Yet many of those designated as “Cultural Marxists” still viewed themselves as classical Marxists and some still do.

Exponents of what the Frankfurt School called “critical theory”—like Herbert Marcuse, Theodor Adorno, and Erich Fromm—were considered by orthodox Marxists to be fake or ersatz Marxists. But they did adopt orthodox Marxist-Leninist theory in key aspects:

These disciples of the Frankfurt School, like Marx, were eager to replace what they defined as bourgeois society by a new social order. In this envisaged new order, humankind would experience true equality for the first time. This would be possible because, in a politically and socially reconstructed society, we would no longer be alienated from our real selves, which had been warped by the inequalities that existed until now.

But unlike authentic Marxists, Cultural Marxists have been principally opposed to the culture of bourgeois societies—and only secondarily to their material arrangements. Homophobia, nationalism, Christianity, masculinity, and anti-Semitism have been the prime villains in the Cultural Marxist script.

This is especially true as one moves from the philosophy of the interwar German founders of the Frankfurt school, like Theodore Adorno, Max Horkheimer and Herbert Marcuse, to the second generation. This second generation is represented by Jürgen Habermas and most of the multicultural theorists ensconced in Western universities.

For these more advanced Cultural Marxists, the crusade against capitalism has been increasingly subordinated to the war against “prejudice” and “discrimination.” They justify the need for a centralized bureaucratic state commanding material resources not because it will bring the working class to power, but to fight “racism,” “fascism,” and the other residues of the Western past.

If they can’t accomplish such radical change, Cultural Marxists are happy to work toward revolutionizing our consciousness with the help of Leftist moneybags— hedge fund managers, Mark Zuckerberg etc. Ironically, nationalizing productive forces and the creation of a workers’ state, i.e. the leftovers from classical Marxism, turn out to be the most expendable part of their revolutionary program, perhaps because of the collapse of the embarrassing collapse of command economies in the Soviet bloc. Instead, what is essential to Cultural Marxism is the rooting-out of bourgeois national structures, the obliteration of gender roles and the utter devastation of “the patriarchal family.” 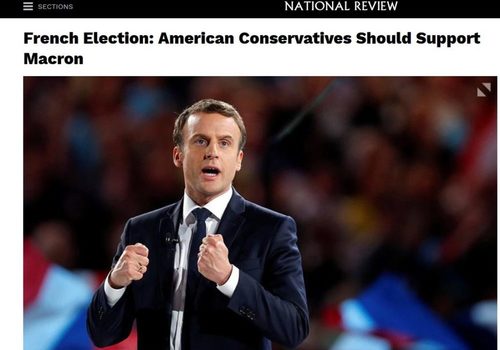 Not only does Cultural Marxism exist, but it now appears to be taking over Conservatism Inc. Thus even with Paris burning, National Review was still attacking the Right. In the second round of the French election, Tom Rogan urged a vote for Emmanuel Macron on the grounds Marine Le Pen is insufficiently hostile to Vladimir Putin and is a “socialist” because she “supports protectionism.” Macron’s actual onetime membership in the Socialist Party, and his view that there was no such thing as French culture, apparently was not a problem [French election: American Conservatives Should Support Macron, April 24, 2017].

Conservatism Inc. goes along because these goals are partially achieved through corporate capitalists, who actively push Leftist social agendas and punish entire communities if they’re insufficiently enthusiastic about gay marriage, gay scout leaders, transgendered rest rooms, sanctuary cities etc.. Wedded as it is to a clichéd defense of the “free market,” the Beltway Right not only won’t oppose this plutocratic agenda, but instead offers tax cuts to the wealthiest and most malevolent actors.

It is because Cultural Marxism can co-exist with our current economic and political structure that our so-called “conservatives” are far more likely to align with the New Left than the Old Right. The behavior of our own captains of industry shows the rot is deep and that multiculturalism is very much part of American “liberal democratic” thinking, even informing our bogus conservatism.  “Conservatism” is now defined as waging endless wars in the name of universalist values that any other generation would have called radically leftist.  And Cultural Marxists themselves now define what we call “Western values”—for example, accepting homosexuality

The takeover is so complete, we might even say “Cultural Marxism” has outlived its usefulness as a label or as a description of a hostile foreign ideology. Instead, we’re dealing with “conservatives,” who are, in many ways, more extreme and more destructive than the Frankfurt School itself.

Many conservatives seem to believe Cultural Marxism is just a foreign eccentricity somehow smuggled into our country. Allan Bloom’s “conservative” bestseller The Closing of the American Mind [PDF]  contended that multiculturalism was just another example of “The German Connection.” This is ludicrous.

Case in point: unlike Horkheimer, or my onetime teacher Herbert Marcuse, leading writers within Conservatism Inc. are sympathetic to something like gay marriage.

Indeed, homosexual liberation is so central to modern conservatism that the Beltway Right’s pundits urge American soldiers to impose it at bayonet point around the world.  Kirchick complains we haven’t pressed the Russian “thug” Vladimir Putin hard enough to accept such “conservative” features of public life as gay pride parades. [Why Putin’s Defense of “Traditional Values” Is Really A War on Freedom, by James Kirchick, Foreign Policy, January 3, 2014]

Another frequent contributor to National Review, Jillian Kay Melchior, expressed concern that American withdrawal from Ukraine might expose that region to greater Russian control and thereby diminish rights for the transgendered. [Ukrainians are still alone in their heroic fight for freedom, New York Post, October 8, 2015]

If that’s how our Respectable Right reacts to social issues, then it may be ridiculous to continue denouncing the original Cultural Marxists. Our revolutionary thinking has whizzed past those iconoclastic German Jews who created the Frankfurt Institute in the 1920s and then moved their enterprise to the US in the 1930s. Blaming these long-dead intellectuals for our present aberrations may be like blaming Nazi atrocities on Latin fascists in 1920. We’re better served by examining those who selectively adopted the original model to find out what really happened.

At this point we should ask not whether the Frankfurt School continues to cast a shadow over us but instead ask why are “conservatives” acquiescing to or even championing reforms more radical than anything one encounters in Adorno and Horkheimer?

Admittedly, Conservatism Inc. has drifted so far to the Left that one no longer blinks in surprise when a respected conservative journalist extolls Leon Trotsky and the Communist Abraham Lincoln Brigade in the Spanish Civil War. Yet it’s still startling to see just how far left the Beltway “Right” has moved on social issues. Even more noteworthy is how unwilling the movement is to see any contradiction between this process and the claim they are “conservatives.”

And let’s not pretend that Conservatism Inc. is simply running a “Big Tent.” Those who direct the top-down Beltway Right are eager to reach out to the Left, providing those they recruit share their belligerent interventionist foreign policy views and do nothing to offend neoconservative benefactors, while purging everything on their right.

This post-Christian, post-bourgeois consensus is now centered in the US and in affiliate Western countries and transmitted through our culture industry, educational system, Deep-State bureaucracy, and Establishment political parties.

The Beltway Right operates like front parties under the old Soviet system. Like those parties, our Establishment Right tries to “fit in” by dutifully undermining those to its the Right and slowly absorbing the social positions and heroes of the Left.

Occasionally it catches hell for not moving fast enough to the Left. But this only bolsters the image of Conservatism, Inc. as defenders of traditional America against the Left—an image that it won’t lose even as it veers farther in the direction of its supposed adversary.

In short, Conservatism Inc. is not just a scam—but it’s become a Cultural Marxist puppet. And the Dissident Right consists of those who can see through it.

Paul Gottfried [ email him ] is a retired Professor of Humanities at Elizabethtown College, PA. He is the author of After Liberalism, Multiculturalism and the Politics of Guilt and The Strange Death of Marxism His most recent book is Leo Strauss and the Conservative Movement in America.