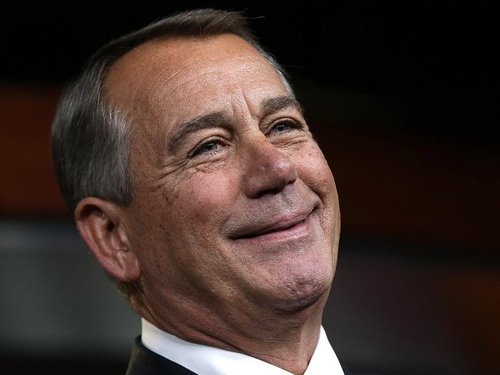 A Reader Insists We're Not Being Hard Enough On John Boehner

From: An Anonymous Boehner Critic [Email him]

Washington Watcher's article contains the sentence "Boehner was willing to shut down the government to defund Obamcare—though he of course eventually caved—...", about which I'd like to express a couple reservations...

Second, and this is the actual trigger for this note, I'd like to remind you that Boehner didn't cave "eventually", he caved immediately, giving up on defunding Obamacare in favor of some jiggering of the Medical Device Tax. Then after his final surrender he complained ("You're kidding me!") that some "Tea Party" group had pushed the effort despite saying beforehand that they doubted it would work. [Six Times John Boehner Proved His Incompetence, by Ben Shapiro, Breitbart, January 2015] He laughably failed to make the connection that his "leadership" might be the reason for that lack of confidence.