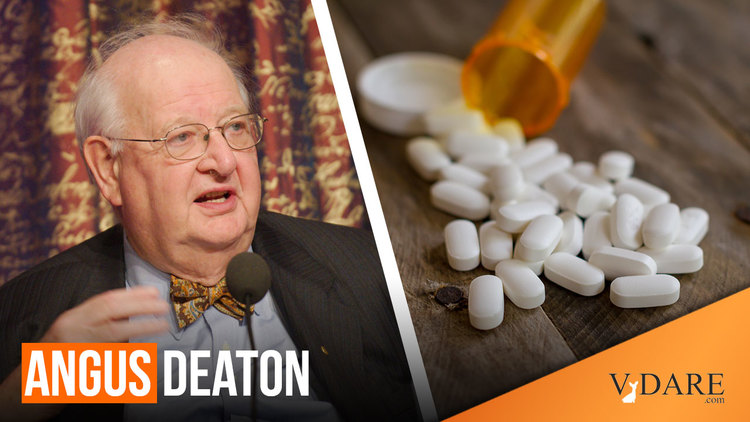 A Reader Wants To Know WHO, At Medical Journals, Rejected Angus Deaton's Findings On The White Death From Opioids?

Re: Steve Sailer's blog post Journal Of The American Medical Association Fires Editor for Having Doubts About Dogma Of Systemic Racism

From: Delmar Jackson [Email him]

For years, after reading one of Steve Sailer's 2015 articles [#WhiteLivesDon'tMatter: More Evidence]  on what he refers to as the White Death from opioids, a question has stayed with me and has never left.. Who back in 2015 were the racists that rejected Nobel prize winner Angus Deaton's study showing whites were dying early deaths by the millions? Who were these anti-white racists at JAMA and the New England Journal of Medicine? [Prestigious medical journals rejected stunning study on deaths among middle-aged whites, By Joel Achenbach and Lenny Bernstein, Washington Post,  November 3, 2015].

What were their names and who hired them and kept them employed hating our people? How many other studies that could've helped white people did they keep from being published? Why are there no journalists asking this question?

I submit that judging by the anti-white actions of these medical journals that there are indeed racist doctors and systemic racism, but it is against whites.