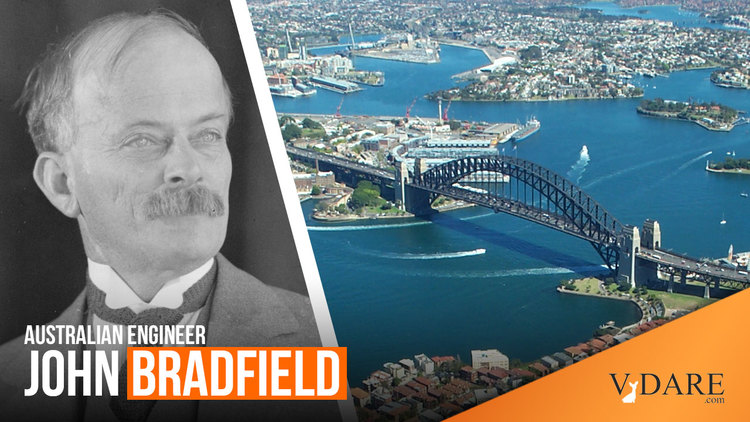 From: Phil Shannon [Email him]

Dead white male supremacy—will it never end? Well, it will, if Andy Marks, Assistant Vice-Chancellor of Western Sydney University, has anything to do about it. The achingly woke academic has taken to the opinion pages of the Sydney Morning Herald to lament how, “only hours after the Women’s March 4 Justice, the New South Wales government determined it was a perfect moment to celebrate another Aussie fella” by announcing that Australia’s “first 22nd century city,” a proposed “aerotropolis” for future advanced manufacturing, research, science and education, will be named after the Sydney engineer, John Bradfield [Hours after women marched for justice, Gladys Berejiklian decided to commemorate yet another man, March 16, 2021].

Of English ancestry, Bradfield, in the early-mid decades of the 20th century, gave us the iconic Sydney Harbour Bridge (the steel-arch bridge fondly known to Aussies as the Great Coathanger) amongst other emblematic engineering achievements such as electric railway systems and dams for hydro-electric power. This place-naming decision, however, shamefully “enshrines deceased white Anglo males above all others,” bemoans Dr. Marks, a guilt-ridden white Anglo male.

Disregarded in the city-naming stakes, says Marks, are women, whose March 4 Justice rallies were an antipodean reprise of the unsubstantiated and politically vexatious historic sexual assault allegations by three “victims” against the Trump-proposed Supreme Court nominee, Brett Kavanaugh, in the US. The Australian version of the #MeToo vigilante mob are taking aim at the then 17-year-old, and now Liberal Party federal Attorney-General, Christian Porter, based on a claim by a woman who had long-term psychiatric problems that eventually ended in her suicide in 2020. A spicy pincer movement against the center-right conservative government was launched by a former Liberal staffer, Brittany Higgins, alleging a more contemporaneous rape, in Parliament House itself, by another Liberal staffer when both were apparently as high as kites on alcohol after an office party (the basic plot line of every second episode of Law and Order, if anyone still watches that woke monstrosity).

Doubly disregarded are Aboriginal women such as “Gamaraigal woman, Patyegarang,” who “worked with First Fleet astronomer, William Dawes,” says Marks, employing a linguistic sleight-of-hand to desperately spin an 18th century Aboriginal woman, whose claim to fame seems to have been an ability to speak and teach her native Gadigal language, as some sort of scientist on a par with the US black women mathematicians on whom the entire 1969 Moon Landing program apparently depended.

Perhaps Google was on the fritz and kept returning “No Results” when Marks typed in searchwords for prominent Australian women-of-color engineers, indigenous or imported, renowned for the building of bridges, dams and power turbines, such as, well, um, er ….

According to the University of Melbourne professor Bruce Pascoe (an Aboriginal), "over 60% of Australian place names are of Aboriginal origin." Although this is around 20 times the Aboriginal proportion of the total Australian population, the fully woke are not satisfied. They never are.

Whilst many Aboriginal place names have a pleasing, child-like rhythm (for example, Woolloomooloo, Turramurra, Wangaratta, Mullumbimbi and, the town so good they named it twice, Wagga Wagga—pronounced Wogga Wogga), to name a new city after a visionary engineer from a Western civilization who has given so much to the modern technological and economic development of Australia would not seem out of place—unless they are male, and white, of course.

James Fulford writes: Worth noting that the Australian States of Victoria, and Queensland, and the City of Adelaide are already named after female women of the opposite sex—the first two after Queen Victoria and the last after Adelaide of Saxe-Meiningen, wife of King William IV.