From: Joseph Garibaldi [Email him]

Steven Spielberg's modern West Side Story has "authentic" casting if you're Hispanic, not if you're a white ethnic:

"Many of the 'Puerto Ricans' in the original movie were white actors in brown makeup. Spielberg only wanted performers with Hispanic backgrounds to play Hispanic characters, and he estimates that 20 of the 33 Puerto Rican characters are specifically Puerto Rican or of Puerto Rican descent."

So much for authenticity.

James Fulford writes: One (1) of the Jets in the 1961 movie was authentically Italian, Anthony Mordente, who played a character named Action. Everyone else was very inauthentic, with a number of Greek-Americans, and even one Japanese-American dancer who played Graziella:

The producers did not require Latino performers for the Puerto Rican characters. Those with light-colored eyes would be Jets and those with dark eyes would be Sharks; some of the latter had their skin darkened.

“There were only two or three Puerto Ricans in the whole cast — one was Rita Moreno, another was Yvonne Wilder,” Miyamoto said. Noting that Chakiris is of Greek ancestry — and that Moreno played a Thai character, Tuptim, in “The King and I” — she added, “We’re not talking about strict (ethnic) lines.”

STILL ONE OF THE SHARKS: Nobuko Miyamoto Looks Back at ‘West Side Story’ 50 Years Later, December 14, 2011

Miyamoto is third from the left here: 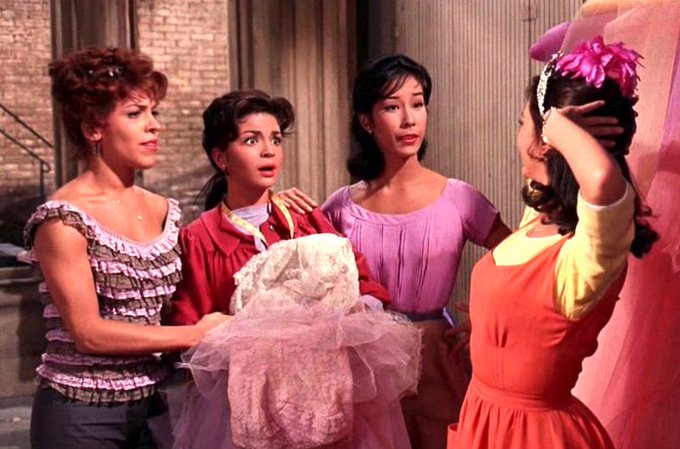