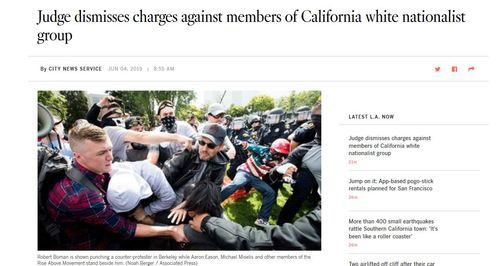 As "Charlottesville Survivor" argued, the "Alt Right" did not so much self-destruct as be mugged by an alliance between government and antifa. The latter functioned in its traditional role as militant wing of the system.

The pattern was basic.

One of the groups victimized by this pattern was the "Rise Against Movement." They've been identified as a "white nationalist" group, but it's not clear that's the case. It seems like they were more of a civic nationalist group that liked working out, waving the American flag, and standing against antifa. There was a lot of militant imagery in the group, but certainly less than what you see in an antifa group that openly declares its intention to "shut down" or "smash" people.

At the behest of liberal reporters, members of the Rise Against Movement were arrested and charged with "conspiracy to riot." This is a charge very rarely used and seemingly created to disrupt Vietnam Era protesters. Today, it only seems to be used against right-wingers.

Yet justice is not entirely subjective in America quite yet. In a shocking setback to the radical Left, charges against members of the Rise Against Movement were dismissed and some members were set free in a California courtroom yesterday.

A Los Angeles federal judge on Monday dismissed all charges against three reputed members of a Southern California white nationalist group suspected of having incited brawls at political rallies.

U.S. District Judge Carmac J. Carney granted a defense motion dismissing charges against Robert Rundo, Robert Boman and Aaron Eason on grounds that the federal riots act — under which they were charged — “is unconstitutionally overbroad in violation of the First Amendment…”

Carney wrote in his ruling that the act goes well beyond criminalizing the behavior of those acting in the midst of a riot.

“It also criminalizes acts taken long before any crowd gathers,” or acts that have only a slight connection to violence, according to Carney.

“No violence even need to occur,” the judge wrote. “A defendant could be convicted for renting a car with a credit card, posting about a political rally on Facebook or texting friends about when to meet up.”

The decision is worth reading in full. The legislation is terrifyingly broad.

Every antifa group in the country could be charged under the "Anti-Riot Act" tomorrow. But they won't be, because they enjoy media support and elite sponsorship. Nationalists have no such resources.

Several other members of RAM have already pled out; it's unclear what will happen to them now. Furthermore, the government is considering an appeal. Because they will be pressured by journalists who think certain opinions should be outlawed, I expect the government will take another shot at this group. I expect the judge will also come under media attack.

It's not that I have any particular affection for RAM. I don't know anyone in the group, have never met anyone who knows anyone (as far as I know), and didn't really follow their actions before they were charged.

Yet this case is vitally important. The people in this group were charged because journalists wanted it. They were charged and members' lives ruined, while antifa were not. More than that, the writings of antifa were used as evidence by prosecutors. RAM needs to be defended by all Americans.

It was an absolutely terrifying case, and the fact that it was even allowed to get this far shows America is not a free country. It is shameful that seemingly no outlets from Conservatism Inc. mentioned it.

However, the outcome shows there are still ways nationalists can fight back in the courts. This was a notable victory, not for "white nationalists," not for "right-wingers," but for the rule of law. Let's hope it lasts.