Daniel Pipes, as I mentioned in the Today's Letter, has done a post called Affirmative Action in Beauty Contests?[May 16, 2010], in which he writes of the various "first Muslim" beauty contest winners,

They are all attractive, but this surprising frequency of Muslims winning beauty pageants makes me suspect an odd form of affirmative action.

My suspicion is borne out by the selection of Anisah Rasheed as Miss A&T at North Carolina Agricultural and Technical State University. From the news report about her success:

Excited and jittery, Anisah Rasheed of Roanoke pondered a fashion dilemma that few beauty queens have faced before: Matching her coronation gown with her hijab. … Rasheed, 20, was crowned Miss A&T for 2005-06 on Thursday night in a sparkling fishtail gown–with a tiara glittering over her golden hijab–during homecoming ceremonies at North Carolina A&T State University. 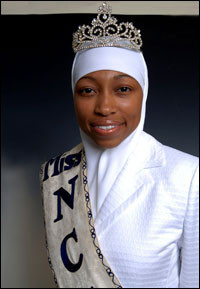 I'm not sure if Pipes realizes that North Carolina Agricultural and Technical State University is Historically Black College, (Jesse Jackson's alma mater) and so its homecoming queen would have to be African-American, but what you can see of Miss Rasheed doesn't strike me as a raving beauty at best, and it's crazy to have Muslim girl in a hijab as a homecoming queen.

But unlike Rima Fakih, who was born in Lebanon, Miss Rasheed is at least an actual American, part of the Black Muslim phenomenon, rather than the mass immigration phenomenon.