Congressman Paul Ryan is stuck on the idea that generational Boomer retirement will cause a scarcity of workers sooner or later and believes that mass immigration will save his pals, the billionaires who are starving for cheaper labor.

Ryan made the Boomer point on the Laura Ingraham radio show more than a year ago:

REP. PAUL RYAN (R-WIS.): Not now, but in the future we’re going to have labor shortages. We have 10,000 people retiring each and everyday in America when the Baby Boomers retire. We are not like Europe, we’re not like Japan in that our birthrates are really low, but they’re not high enough. Immigration, in a decade or so, can help us. That means we need to get an immigration system that works. We need an immigration system that works to bring people to this country who want to contribute. (The Laura Ingraham Show, June 19, 2013)

Now Ryan is making the rounds to sell his new book, The Way Forward: Renewing the American Idea where the Ryan plan for immigration takes up six pages, 197-203, according to the index. The false Boomer excuse for big immigration and amnesty appears to be part of the book sales pitch. It certainly figured strongly in Ryans Monday appearance on Fox News with host Eric Bolling (who recommended quadrupling legal immigration on July 30).

PAUL RYAN (4:12): If we had the right kind of immigration, which is a secure border, a secure interior enforcement system where you cannot get a job if you are not here legally in this country. Thats a huge magnet youve got to turn off, and then we have immigration based on what the economy needs, not based on shirt-tailed relations beyond the nuclear family. So our real goal ought to be an absolute border where we know whos coming and going and control that in our country. If we have control of the interior, we reorient our immigration system to fit the economys needs, because we have Baby Boomers retiring, we have to be prepared for that.

To Ryan, immigration is all economic. He doesnt acknowledge mass immigrations effects on traditional American culture which prefers less government and more freedom, in contrast to that of foreigners who prefer big government and maximum free stuff.

As I have pointed out previously, part of the reason for the jobless recovery (in addition to the administrations crazy-extreme regulations) is the progress made in robotics and automation. The Boomer retirement will be covered in many jobs by smart machines and wont be noticed for the most part.

An amazing array of smart machines are no longer just ideas in Silicon Valley but are products on the market now.

Human-replacing machines include the robot bellhop, the robot burger flipper, manufacturing robots like Baxter and UBR-1 designed to work alongside humans to help them.

When manufacturing business returns to America from being outsourced, the companies routinely need fewer human workers because of increased automation.

Below, Generac Power Systems, which shifted some of its work from abroad, can now make an alternator with one worker in the time it took four workers in China. 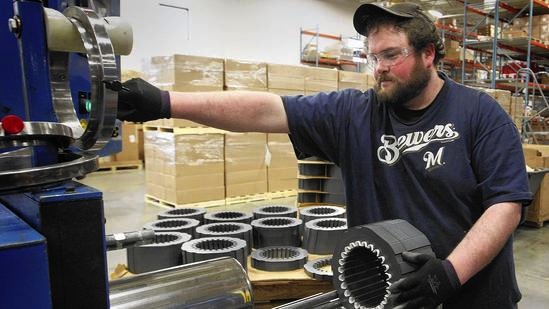 Out on the farm, simple mechanical weeders have been joined by robot milking machines which cows learn to use when they feel the need to unload and robotic hands that can pick individual fruits and vegetables.

Professional occupations are not free from the smart machine incursion either, including lawyers and robot doctors performing medical diagnosis.

A 2013 Oxford University study found that 45 percent of US jobs are vulnerable to computerization in the next 20 years, so the trend is understood to be widespread and creating a workplace revolution unkind to workers.

For more on this topic, see my Social Contract article, Three stakes in the heart of the American Dream.

A little-noticed consequence of the omnipresent robot revolution is that increased legal immigration is not needed at all. In fact, Zero immigration is the proper number Americas employment needs in the automated future.