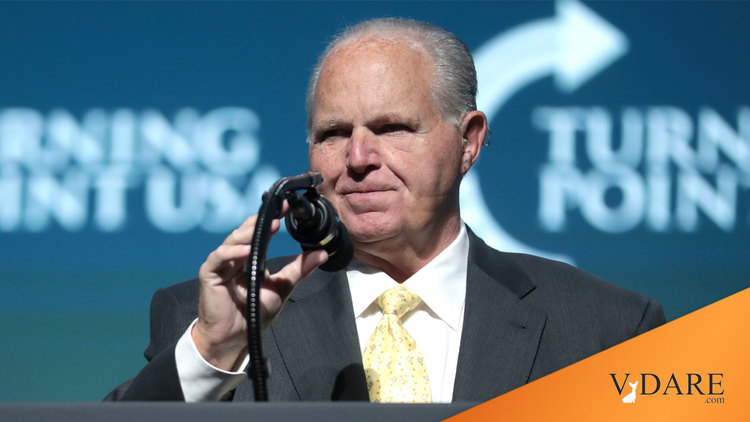 Another Perspective On Rush Limbaugh: “He Led the Fight Against Amnesty“

Rush Limbaugh passed away this week, drawing forth responses from all across the political spectrum. VDARE.com offered its assessment of Limbaugh from a Dissident Right perspective. Peter Brimelow critically concluded: “Rush Limbaugh Made Up His Mind On Immigration. Sadly, He Didn't Do Much About It.”

A more favorable Dissident Right view of Limbaugh was offered by Robert Hampton at Counter-Currents. Hampton acknowledged that Peter was right to criticize Limbaugh’s tardiness on immigration, but he believes the talk show host did try to do something about it:

He led the fight against amnesty. This was particularly helpful in 2013, when many prominent conservative figures backed the sellout. He presaged Trump’s immigration pitch in 2016. Throughout the campaign, Rush credited immigration for Trump’s popularity and urged Republicans to take the issue seriously. He even attacked Trump when it appeared the then-candidate would endorse amnesty (Trump did not do so.) Limbaugh moved beyond typical Republican talking points about the “rule of law” and exclusive concerns about illegal immigration. His radio program frequently discussed how Democrats weaponize mass immigration to change America’s demographics and secure future election victories. As Brimelow noted, Limbaugh began to entertain secession in his final months due to America’s demographic predicament. These are not discussions Sean Hannity or Mark Levin would ever touch. [Rush Limbaugh Remembered from the Right, by Robert Hampton, Counter-Currents, February 18, 2021]

Hampton also remembers that Limbaugh positively read a Sam Francis essay on his show in 2016 and praised the author:

In 2016, he read Sam Francis’s “From Household To Nation” essay on the air and praised its author. The 1996 essay advised a hypothetical Republican candidate to abandon traditional conservatism and promise to restore the nation’s Middle American core. “[S]ooner or later, as the globalist elites seek to drag the country into conflicts and global commitments, preside over the economic pastoralization of the United States, manage the delegitimization of our own culture, and the dispossession of our people, and disregard or diminish our national interests and national sovereignty, a nationalist reaction is almost inevitable and will probably assume populist form when it arrives,” Francis wrote in that essay. Limbaugh read this to his 15 million listeners and said it described Trump. He was attacked by the SPLC for this grave offense.

Very few conservatives would have the guts to even admit they know who Sam Francis is, much less read his work to millions of Americans.

The article isn’t all praise, however. Hampton criticizes Limbaugh for his past support of NAFTA, the Iraq war, and his inability to define America as anything more than liberal values. But the Counter-Currents writer finds the ultimate value in Limbaugh in offering an alternative to millions of good Americans who were sick of the mainstream media’s lies. The liberal media’s celebration of his death testifies to this fact.

You can know a man a lot by his critics. Liberal publications shrieked in unison that Limbaugh made America and conservatism worse on his death day. They complained he was too racist, sexist, crude, bombastic, and even entertaining for them to respect. In their opinion, without Limbaugh, conservatives would’ve embraced everything liberal elites imposed on them. They would all be more like John McCain and just respectfully dissent on higher taxes.

Read the rest of the essay here.