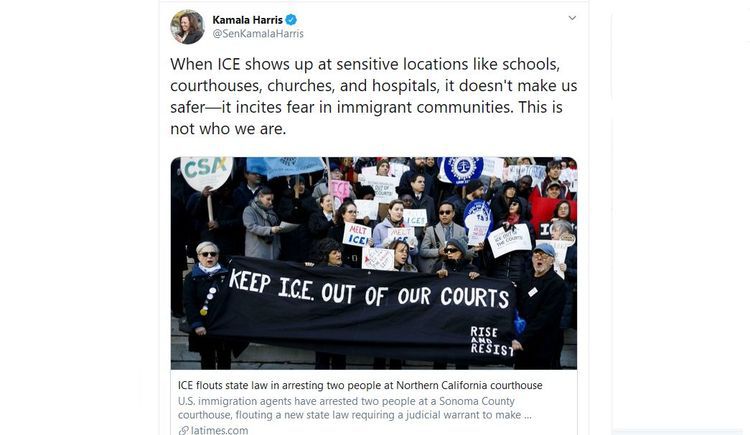 Are California Courts Trying To Start A Civil War?

Earlier by Peter Brimelow: "It Will Come To Blood"—Reflections On The Left's Anti-Trump Inauguration Tantrum

I’ve said (on my deleted-by-Google former blog) that a shootout between Federal agents and local cops would start over the arrest of an illegal alien in a courtroom. It now looks like that is going to come true.

And, as I predicted, the violence is coming, and it will start between U.S. Immigration and Customs Enforcement and Removal Operations (ICE ERO) agents making an arrest in a court and crazed local politicians ordering their investigators, deputy sheriffs, and police officers to use violence to protect illegal aliens.

When ICE shows up at sensitive locations like schools, courthouses, churches, and hospitals, it doesn't make us safer―it incites fear in immigrant communities. This is not who we are. https://t.co/r6s47jmdFH

And Civil War II almost got a start like Fort Sumter in a Sonoma County Superior Court.

U.S. immigration agents have arrested two people at a Northern California courthouse, including a man detained in a hallway on his way to a hearing, flouting a new state law requiring a judicial warrant to make immigration arrests inside such facilities.
Immigration and Customs Enforcement agents made the arrests Tuesday at Sonoma County Superior Court, prompting an outcry from criminal justice and court officials who said the action undermines local authority and deters immigrants who are in the country illegally from participating in the U.S. justice system.

ICE said in a statement that California’s law doesn’t supersede federal law and “will not govern the conduct of federal officers acting pursuant to duly enacted laws passed by Congress that provide the authority to make administrative arrests of removable aliens inside the United States.”

Not surprisingly, a shyster from the Sonoma County Public Defender’s Office (SCPDO), and an investigator, presumably from the SCPDO as well, attempted to interfere with the arrest by ICE ERO agents.

In one of the arrests, a Sonoma County public defender and an investigator confronted an ICE agent leading a 37-year-old man to an unmarked law enforcement vehicle, demanding information about the affiliation of the agent, who wore no uniform, and the name of the man being taken away, Pozzi said. The man was detained in a second-floor hallway of the courthouse before he could attend his court hearing, she said.

Plainclothes officers and detectives are routine in all courts, as are unmarked “law enforcement vehicles.” That they would describe the vehicle as law enforcement clearly shows that they knew what they were doing. They must have known that the officer was ICE and they were planning to interfere with the arrest, otherwise they would have ignored such a routine sight in a court house. This is evidence of mens rea, intent, to commit the crime of interfering with a Federal law enforcement officer, Title 18 United States Code Section 111, Assaulting, Resisting, or Impeding Certain Officers Or Employees.

It is time for Based Bill Barr to order prosecution of those two from the Public Defender’s Office who attempted to interfere with the ICE arrest. If nothing is done, things will get worse. Nip this in the bud. Make an example to prevent the next Civil War.