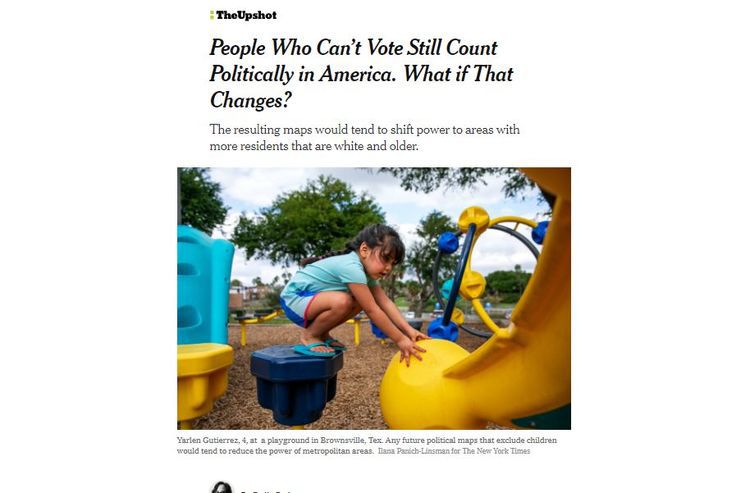 The New York Times is shocked, SHOCKED to learn that a few smart Republicans have figured out that the Democrats are trying to rig elections through illegal immigration:

People Who Can’t Vote Still Count Politically in America. What if That Changes?

The resulting maps would tend to shift power to areas with more residents that are white and older.

Three years ago, before the Trump administration moved to add a citizenship question to the census, and before many experts even imagined what that might mean …

Because of course the Democrats are so naive and trusting that they never imagined that anybody would ever notice their Grand Strategy for dominance.

… At the state level, such maps would also strip from these groups a principle as old as the Constitution: that even someone who cannot vote still deserves representation.

Such as the time-honored Three-Fifths clause that gave slaves three-fifths as much representation.

And if the Supreme Court allows the census to gather citizenship data on every person in America, that case seeking to redefine what representation means is likely to come soon.

The Constitution is clear that congressional seats must be apportioned by total population. But states and local governments that would have comprehensive citizenship data in the next redistricting cycle could draw maps built on a very different population base, at a time when the country is growing more diverse, its child population particularly so.

Newly released census data show, for the first time, that the total population of children in America under 15 is now majority nonwhite.

Any future political maps that exclude those children and noncitizens would further depress the power of urban areas that tend to vote Democratic and that are already structurally disadvantaged in redistricting.

Groups that sued to block the citizenship question argue that the Trump administration’s true goal — hinted at in recent documents unearthed in the litigation — is to set this chain of events in motion. Even without these larger changes, a citizenship question that deters some immigrants from participating in the census could affect congressional apportionment.

Texas itself, in defending its total population formula in the Evenwel case, argued that it should still retain the future right to use eligible voters instead. Other proponents of the idea say that existing maps unfairly reward places with more undocumented immigrants.

Texas’ voting-age citizens look demographically more like the entire state of Texas did in 2000, before the state grew more racially and ethnically diverse, according to William Frey, a demographer at the Brookings Institution. The same is true of Arizona. Redefining who gets represented in those states would be akin to rolling back nearly two decades of demographic change.

“We’re moving forward in a global economy and a more diverse country,” Mr. Frey said of this possibility, “and we’re going to have a representation of a country that really is more like the 20th century than the 21st century.”

As far as I can tell, this question seldom gets asked. Instead, the zeitgeist is a seamless web of circular logic.