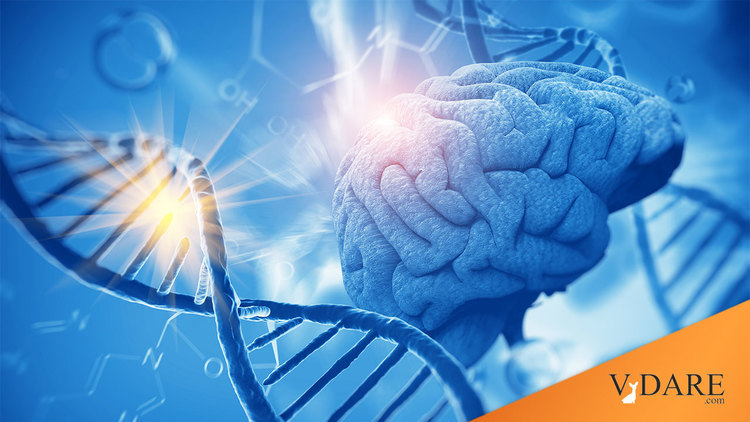 Brains: Bigger Is Better, Sort Of

Scientific American has an article, "High Aptitude Minds," by Christian Hoppe and Jelena Stojanovic on the relationship between brain size and IQ:

Most studies show that smarter brains are typically bigger–at least in certain locations. Part of Einstein’s parietal lobe (at the top of the head, behind the ears) was 15 percent wider than the same region was in 35 men of normal cognitive ability, according to a 1999 study by researchers at McMaster University in Ontario. This area is thought to be critical for visual and mathematical thinking. It is also within the constellation of brain regions fingered as important for superior cognition. These neural territories include parts of the parietal and frontal lobes as well as a structure called the anterior cingulate.

But the functional consequences of such enlargement are controversial. In 1883 English anthropologist and polymath Sir Francis Galton dubbed intelligence an inherited feature of an efficiently functioning central nervous system. Since then, neuroscientists have garnered support for this efficiency hypothesis using modern neuroimaging techniques. They found that the brains of brighter people use less energy to solve certain probÂ­lems than those of people with lower aptitudes do.

In other cases, scientists have observed higher neuronal power consumption in individuals with superior mental capacities. Musical prodigies may also sport an unusually energetic brain [see box on page 67]. That flurry of activity may occur when a task is unusually challenging, some researchers speculate, whereas a gifted mind might be more efficient only when it is pondering a relatively painless puzzle.

Despite the quest to unravel the roots of high IQ, researchers say that people often overestimate the significance of intellectual ability [see ”Coaching the Gifted Child,” by Christian Fischer]. Studies show that practice and perseverance contribute more to accomplishment than being smart does.

Size Matters In humans, brain size correlates, albeit somewhat weakly, with intelligence, at least when researchers control for a person’s sex (male brains are bigger) and age (older brains are smaller). Many modern studies have linked a larger brain, as measured by magnetic resonance imaging, to higher intellect, with total brain volume accounting for about 16 percent of the variance in IQ. But, as Einstein’s brain illustrates, the size of some brain areas may matter for intelligence much more than that of others does.

So, I guess Stephen Jay Gould didn't know what he was talking about. Imagine that!

The article makes a point that I've long noticed with myself. Thinking hard makes my head hot. When I give up thinking about something as too hard, it's usually because of an unpleasant warm sensation in my head.

Starting in the late 1980s, Haier and his colleagues have gathered data that buttress this so-called efficiency hypothesis. The researchers used positron-emission tomography, which measures glucose metabolism of cells, to scan the brains of eight young men while they performed a nonverbal abstract reasoning task for half an hour. They found that the better an individual’s performance on the task, the lower the metabolic rate in widespread areas of the brain, supporting the notion that efficient neural processing may underlie brilliance. And in the 1990s the same group observed the flip side of this phenomenon: higher glucose metabolism in the brains of a small group of subjects who had below-average IQs, suggesting that slower minds operate less economically.

In 2004 I bought a laptop with the new CPU chip that goes to sleep when it's not being used. I chose it specifically to generate less heat because when I was working hard thinking about something, I didn't want my computer working hard too, because the combination of both my brain and my computer's brain going full steam was causing my small office to overheat.

The CPU designers at Intel and AMD are always trying to figure out ways to have their chips think more efficiently in order to avoid generating so much heat. Several years ago, Intel gave up its efforts to crank clock speed up past 4 gigahertz because chips were melting.

A bigger brain would have a harder time shedding heat, simply because there is more brain to generate heat and there's more distance from the center of the brain to the outside. So, that's one reason (among many) why humans don't look like super-intelligent alien invaders from sci-fi movies.