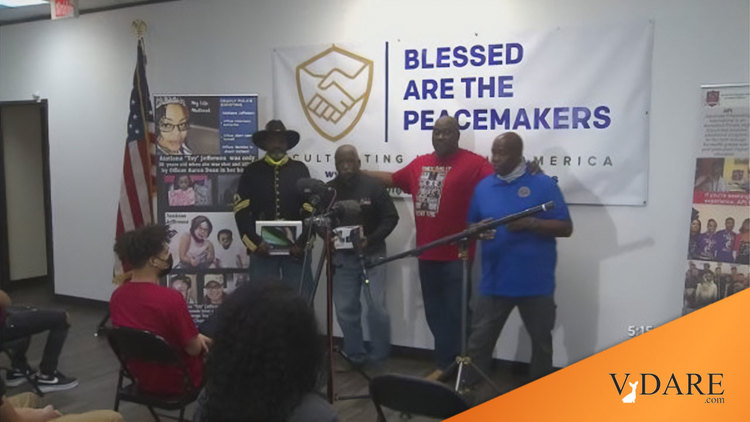 But Black Lives Matter... "The Value Of A Life" Nonprofit In Dallas Exists To Convince Blacks Not To Kill Other Blacks

So about that whole Black Lives Matter trope…

Dallas Nonprofit ‘The Value Of A Life’ Raising Awareness About ‘Black On Black Crime,’ DFW.CBSLocal.com, March 24, 2021

In the wake of last Saturday’s deadly shooting at Pryme Bar, a Dallas nonprofit is bringing attention to what it describes as a “black on black crime” problem in Dallas.

In an attempt to raise awareness and create change, The Value of a Life is working to make investments in the lives of black men.

“We tend to not want to show each other unfavorable, and in this case because it’s a life, we have to come out of that shell,” The Value of a Life founder Bruce Carter said.

“We can no longer sit back and not talk about it,”he said. “Bring it to the forefront.”

“If you have an African-American son and he’s between the ages of 20 and 29, you need to sit down and have a talk with him and tell him don’t let your emotions and a one second decision cost you time out of your life,” he said. “We cannot solve crime alone as a police force. It’s going to take the citizens and the police department.”

“We’ll bring up new black men by serving and helping them and I think we’ll change where people’s mindsets are,” Carter said.

“He has a one-year-old baby and says he doesn’t want to be a victim of the streets,” Carter said. “He wants to do good.”

“A lot of us we have pain going on in the mind – people of color, they don’t want to speak about it because they feel like they’re not being heard or being seen,” Barnett said.

Barnett has dreams of becoming a videographer so The Value of Life and partner organizations are giving him a new camera and laptop to make content that promotes positive, impactful messages in his community. Barnett said this will change the trajectory of his life and others.

“Opportunity is the greatest gift you can give anyone,” Carter said.

”I feel like it’ll be a great thing that will come in the future,” Barnett said.

This article is basically an admission of racial differences, without admitting their existence. When future time-orientation and impulse control are absent (along with reason and accountability), you get a situation where “The Value of a Life” in educating black people not to kill other black people in Dallas is necessary.

Is there a white equivalent of this organization? An Asian? A Hispanic?