Whenever Democrat 2020 candidates yap about America offering open borders to the world, it’s clear that they have never considered the environmental carrying capacity of our little space on the planet.

Unfortunately, California is a popular place for foreigners of varying legality to relocate which has given us more than 10 million foreigners as fellow residents.

There’s no question this state is overpopulated in an environmental sense, and water supply is the most immediate and vital issue in this regard. While much of the state’s water goes to agriculture, public service messages will likely be appearing soon on TV urging California residents to conserve water.

So I’m back to catching shower warm-up water in a five-gallon bucket and using it to keep the camellia bush alive. 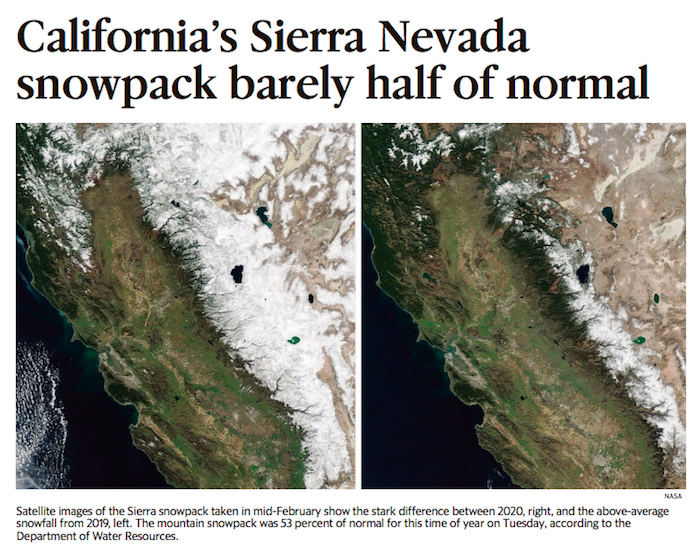 Democrats once claimed they supported the environment, but 2020 candidate Joe Biden recently asserted, “We should be able to increase to three million people the people who could come for family reunification” (Joe Biden: ‘Absolutely Bizarre’ to Suggest Limit on U.S. Capacity to Absorb Immigrants, Breitbart.com, February 18, 2020). And family unification is just one category of immigration.

Of course the whole reason foreigners come to America is to increase their income and consumption of consumer goods and physical resources generally. Only the favored phraseology is to “come for a better life.”

But California is dry.

The image is disturbing and leaves little doubt about California’s growing predicament: The snowpack in the Sierra Nevada is a sad whisper of it was a year ago, a withering testament to the lack of precipitation in the state’s increasingly dry winter.

The National Weather Service tweeted satellite images of the Sierra on Tuesday, showing the stark difference between this year and the above-average snowfall from 2019. The mountain snowpack — a crucial element in the state’s annual water supply — is 53 percent of normal for this time of year, according to the Department of Water Resources.

The immediate forecast isn’t promising. NWS meteorologist Emily Heller said there’s a chance of “some light mountain snow this weekend” — perhaps a couple of inches at elevations of 6,000 feet or above. Even that measly forecast is uncertain.

“It’s too early to get everybody’s hopes up,” Heller said.

Three years after former Gov. Jerry Brown declared the official end of the last drought, the lack of precipitation is putting the state on edge all over again.

California needs a healthy snowpack to replenish its water supply in summer and fall, when the precipitation disappears altogether and the state relies on water in its reservoirs. On average, the snowpack provides about 30 percent of the state’s water needs.

The state also needs moisture in the soil to tamp down the wildfire risk. The historic five-year drought killed tens of millions of trees, helping set the stage for the horrific fire seasons of 2017 and 2018. (Continues)