The latest in Red China ripoffs against America is quite a doozy. Apparently Beijing leaned on one of its people residing in this country to use his position as Chief Investment Officer of CalPERS to redirect billions of dollars toward investment in questionable businesses in China, including military affiliated and some blacklisted by the US government. 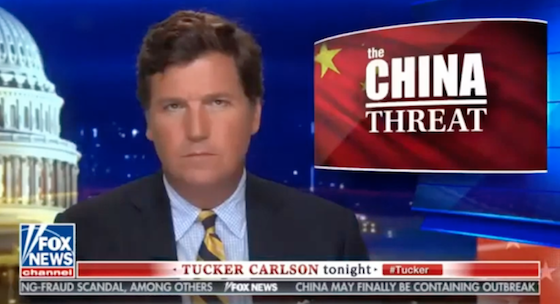 CalPERS is an agency of the state of California that manages pension and health benefits for more than 1.6 million California public employees, retirees, and their families.

The CalPERS website notes that as of February 14, 2020, its total market value was $404.33 billion, so there’s big money involved.

You have to hand it to Red China for inventing ingenious ways to scam America.

Congressman Jim Banks of Indiana explained the situation to Tucker Carlson on Monday:

TUCKER CARLSON: As China becomes more powerful, the Chinese government finds it trivially easy to infiltrate and plunder America’s institutions, almost all of them.

American companies outsource their jobs and eventually their expertise to China in return for a quick profit. Universities and labs hire Chinese scientists who then send their research back to their masters in Mainland China.

But even our pension funds aren’t immune. A remarkable story tonight. CalPERS is California’s public pension system. It has $300 billion in assets under management.

Recently, a letter from Indiana Congressman Jim Banks revealed that CalPERS chief investment officer had been recruited by a Chinese espionage operation. It almost defies belief.

Congressman Banks joins us tonight. Congressman, thanks so much for coming on and for exposing this story, which is shocking and I don’t say that lightly. Tell us — just give us a quick summary of what happened?

REP. JIM BANKS (R-IN): Well, this is really one of the more incredible stories and examples of China’s infiltration into our systems as you talked about, Tucker.

But in this case, we learned that Yu Ben Meng, the Chief Investment Officer of CalPERS is a graduate of something called the Thousand Talents Program, which, Tucker, is a program that’s funded by the Chinese government controlled by the CCP, the Chinese Communist Party that’s designed to recruit valuable individuals and place them in highly valuable places.

In this case, putting Yu Ben Meng in a place to oversee the largest state pension fund in America, where he has steered $3.1 billion to 172 different Chinese companies.

Now, what’s even worse than that, Tucker, is that I serve on the House Armed Services Committee in the Congress, and every day, I’ve been a part of working with President Trump to rebuild our military.

We’ve made the largest investment in American history in our military because we’re trying to keep up with the China threat militarily.

What we’ve learned in this case is that CalPERS is investing in Chinese military shipbuilding and naval bases through this investment fund and even worse than that, they’ve invested in a company called Hikvision, which is a company that has developed some technologies used to spy on and persecute the Uyghur Muslim population through different types of surveillance technologies.

That’s what the California public pension fund is being used for. I believe it’s a travesty. And I’ve called on Governor Newsom to do something about it.

CARLSON: So one of the biggest players in American finance which CalPERS is, is helping to build the military of our chief military rival. This is grotesque.

Quickly, can you tell me, is it just taking place in California? Are there concerns this is happening in other states?

BANKS: I’m concerned that it’s happening all over the country and is happening even in the Thrift Savings Plan, which is the Federal pension plan as well. But this is the only case that we can find where the fund actually employs a graduate of the Thousand Talents Program which makes it so clear and egregious.

It is happening right under Gavin Newsom’s nose. If he doesn’t do something about it, Tucker, we have to ask the question, which side is he on?

CARLSON: That’s a question worth asking. By the way, CalPERS is wildly political, of course, as you know. Congressman, thank you so much for bringing the story to light. Depressing.

BANKS: Good to be with you.