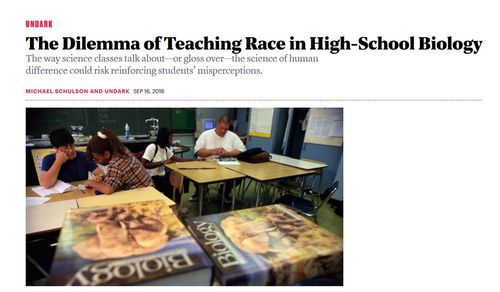 Crimestop Indoctrination in the Classroom: Teaching Race in High-School Biology

The Dilemma of Teaching Race in High-School Biology

Define as best you can: What is a racial group?

A racial group is an extended family that has a higher than random level of coherence and continuity due to some degree of endogamy.

Define as best you can: What is an ethnic group?

An ethnic group is a population united by some cultural characteristics that are typically passed down within genetic families but that don’t have to be (e.g., language, religion, cuisine, attitudes, cultural heroes, etc.) For example, a child conceived by two Koreans who is adopted by a Mormon family in Provo might be racially Korean and ethnically Mormon.

Define as best you can: What is meant by the term genetic ancestry?

Who your biological ancestors were and what genes they have passed down to you. (The two questions overlap but aren’t identical). In contrast, one’s adoptive ancestors would not provide one’s genetic ancestry.

In general, students should be encouraged to think about nature and nurture from the perspective of adoption and twin studies. Most people find these pretty interesting and they open up a world of thought more sophisticated than was ever dreamt of in the philosophy of social constructionists.

True or False: There is too much overlap between racial groups to use a single biological trait (like skin color) to distinguish one racial group from another.

Often true, but it can be false in some situations: e.g., Pygmies and Dinkas can be distinguished based on average height, with basically no healthy 100% Dinkas being shorter than any 100% Pygmies.

True or False: When several traits are combined they can be used to distinguish one racial group from another.

True. We do it all the time: forensic anthropologists who tell cops the race and sex of the skeleton found in a shallow grave from bone measurements, DNA companies, etc. There will always be complex and difficult examples, of course, but in general it works out good enough for government work for the purposes of affirmative action etc.

The next day, Strode showed his students—all seniors—their aggregated results. On some questions, the students were mostly in agreement. More than 80 percent of them, for example, correctly marked Question 4 as “True.” But other topics were muddier, and on several questions—including number five—the students split nearly 50-50. “They’re guessing,” Strode says. (For the record, the answer he says he was looking for on number five was “False.”)

Strode’s exercise is an anomaly. Most American biology textbooks and curricula don’t discuss race at all — nor do they grapple with the biology of sexual orientation or gender, for that matter. To some, these omissions seem appropriate. Early 20th-century biology textbooks, after all, were replete with ignorant racial and gender stereotyping and classifications purporting to be scientific—and some even extolled the virtues of racial purity. It would be hard to find such discussions in today’s biology classrooms and supporting materials. …

Analyzing texts from the post-WWII era, Morning says, it is clear that writers wanted to “really teach students that there’s this theory of superior races or master races, and so forth and so on. So they really took as their charge the responsibility of counteracting World War II Nazi ideology around race. They went all-in.”

But starting around the 1960s, Morning’s research suggests, American science-textbook writers began talking less about issues like race—though that’s not to say that subjects related to human difference don’t come up. Textbooks today go in-depth on human evolution, genetic diversity, and sex. They’re just unlikely to explicitly acknowledge that these biological experiences can intersect with politics and identities.

When mentions of racial categories do crop up, Morning and other scholars point out, they seem to focus on physiological difference—on the genetics of human skin color, for example, or on certain genetic disorders, like sickle-cell anemia, that are often associated with particular racial groups. These are topics, Morning and other scholars argue, that without proper context may actually reinforce the misperception that race has deep biological roots.

Best to just keep your students ignorant or they might start noticing.

… The National Science Foundation recently gave him and a collaborator a $900,000 grant for “exploring how knowledge of genetic variation and causation affects racial bias among adolescents.” When he recently put out a call for high-school classrooms to take part in an upcoming study, around 150 teachers asked to be involved. “People want to do it,” he says. “But they just don’t know how to do it.” …

Ken Miller, a biology professor at Brown University and the co-author, with Joseph Levine, of Prentice Hall’s biology textbook line, similarly said that the topic of race is not even mentioned in their textbook. “We have a very extensive section on human evolution and human origins,” he said. “We talk about the out-of-Africa model for the diversification of the human species … But we do not specifically go into anything that could be recognized as race.” …

That’s especially pressing, she argues, at a time when personal genetic testing and other technological developments are leading to fresh conversations about genetics and ancestry. “There has been this return to claims about biology and race that somebody has to address,” she said. “And so if people like Ken Miller aren’t doing it, that’s a real loss, I think.”

For teachers hoping to tackle these topics, some curricular resources do exist. Both the American Association for the Advancement of Science and the American Anthropological Association have developed teaching guides for talking about race in the science classroom. And other instructors are crafting materials on their own. When she first started teaching undergraduates, Amelia Hubbard would slip a slide into her lectures explaining to students that race is a social construction, not a biological category.

As far as I can tell, that’s about all they’ve got in their toolkit: just keep repeating “race is a social construction, not a biological category.”