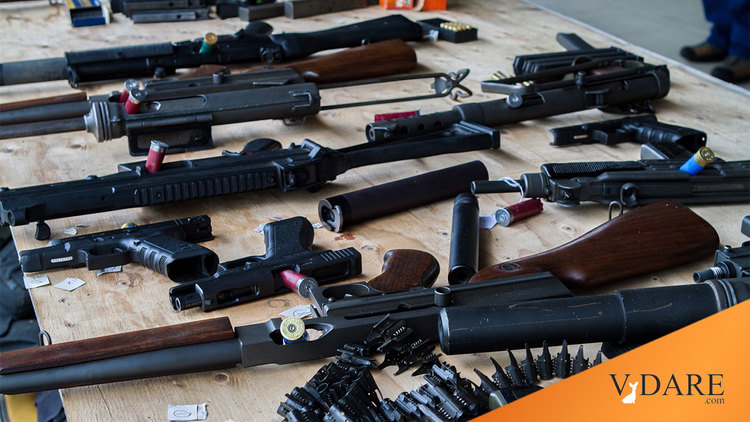 David Frum: How To Persuade Americans To Give Up Their Guns

How to Persuade Americans to Give Up Their Guns

The way to reduce gun violence is by convincing ordinary, “responsible” handgun owners that their weapons make them, their families, and those around them less safe.

After all, subscribers to The Atlantic must make up a huge fraction of America’s gun murderers.

When the coronavirus pandemic struck last year, people throughout the developed world raced to buy toilet paper, bottled water, yeast for baking bread, and other basic necessities. Americans also stocked up on guns. They bought more than 23 million firearms in 2020, up 65 percent from 2019. First-time gun purchases were notably high. The surge has not abated in 2021. In January, Americans bought 4.3 million guns, a monthly record.

The shock and horror of mass shootings focus our attention. But most of the casualties are inflicted one by one by one. Americans use their guns to open fire on one another at backyard barbecues …

Frum likely got that from me but then changed it from “block party barbecues” to “backyard barbecues” to reassure Atlantic subscribers that the biggest danger of gun murders stems not from underclass blacks but from white suburban grillers, the kind who can’t get treated for their countless gunshot wounds because hospitals are jammed with their even more idiotic friends who have overdosed on ivermectin.

The legalistic approach to restricting gun ownership and reducing gun violence is failing. So is the assumption behind it. Drawing a bright line between the supposedly vast majority of “responsible,” “law abiding” gun owners and those shadowy others who cause all the trouble is a prudent approach for politicians, but it obscures the true nature of the problem. We need to stop deceiving ourselves about the importance of this distinction. …

They were not buying weapons for hunting. Only about 11.5 million Americans hunt in a given year, according to the latest Department of the Interior survey, fewer than the number who attend a professional ballet or modern-dance performance.

Nor were they buying weapons to play private militia. Fewer than 10 percent of Americans amass arsenals of five weapons or more. And for all the focus on assault rifles, they make up a small portion of the firearms in private hands: approximately 6 percent of all guns owned.

The weapon Americans most often buy is the modern semiautomatic handgun—affordable, light, and easy to use.

A certain number of David Frum articles are attempts to AtlanticWash my ideas, such as that the Biden Administration’s war on scary-looking long guns is irrelevant to the murder rate, because rural white people virtually never commit murder with their favorite types of guns. So he’s trying to focus attention on handguns without getting cancelled.

This is the weapon people stash in their nightstand and the glove compartment of their car. This is the weapon they tuck into their purse and shove into their waistband. Why? Two-thirds of American gun buyers explain that they bought their gun to protect themselves and their families.

And here is both the terrible tragedy of America’s gun habit and the best hope to end it. In virtually every way that can be measured, owning a firearm makes the owner, the owner’s family, and the people around them less safe. The hard-core gun owner will never accept this truth. But the 36 percent in the middle—they may be open to it, if they can be helped to perceive it.

… The weapons Americans buy to protect their loved ones are the weapons that end up being accidentally discharged into a loved one’s leg or chest or head. The weapons Americans buy to protect their young children are years later used for self-harm by their troubled teenagers. Or they are stolen from their car by criminals and used in robberies and murders. Or they are grabbed in rage and pointed at an ex-partner. …

… America has a gun problem because so many Americans are deceived by so many illusions about what a gun will do for them, their family, their world. They imagine a gun as the guardian of their home and loved ones, rather than the standing invitation to harm, loss, and grief it so much more often proves to be.

One reason that America has surprisingly few Clockwork Orange–style home invasions with urban criminals driving out to the boonies to attack locals is because Boonie-Americans tend to be so well-armed.

For example, even in the 1990s when South-Central Los Angeles was like Grand Theft Auto, Los Angeles’s white and Asian suburbs were pretty safe. Here’s somebody’s current list of the safest municipalities in California. The safest city in Los Angeles County is lovely Rancho Palos Verdes overlooking the Pacific. Rancho Palos Verdes is 22 miles from Compton. In lightly armed England, that would be a sitting duck for inner city criminals to drive out.

Why not in SoCal? For one thing, racial profiling. For another, even Southern California’s exurbs are pretty densely populated, so there aren’t many rural cottages like in Clockwork Orange. Finally, Southern Californians are moderately heavily armed (as you might suspect from all the guns in Hollywood movies). Preying on outlying people is taking your life into your hands in Southern California.

The mass gun purchases of 2020 and 2021 have put even more millions of weapons into even more hands untrained to use and store those weapons responsibly.
But even if none of those things happens—and there is little sign of them happening anytime soon—progress can be made against gun violence, as progress was once made against other social evils: by persuading Americans to stop, one by one by one.

That would be a terrific idea, Dave, if you could start with first persuading the most likely to commit murder with their guns. But how many subscribers does The Atlantic have in the black neighborhoods of St. Louis, anyway?

… The mass gun purchases of 2020 and 2021 have put even more millions of weapons into even more hands untrained to use and store those weapons responsibly.

Hey, I’ve got a great idea! Let’s suggest to law-abiding citizens that they don’t need to arm themselves by making clear that The Establishment stands behind the police protecting them from Mostly Peaceful Protesters.

Also, we should encourage new gunowners to get together with firearms experts and learn proper techniques. Of course, that’s the last thing The Establishment wants: for citizens to get together and develop personal ties with other Second Amendment upholders.

… The gun buyers of 2020–21 are different from those of years past: They are more likely to be people of color and more likely to be women. They are not buying guns to join a race war, or to overthrow the government, or to wait for Armageddon in a bunker stocked with canned beans. They just want to deter a burglar or an assailant, should one come.

Those dangers are real, and it’s understandable that people would fear them and seek to avert them. But like the people who refuse lifesaving vaccines for fear of minutely rare side effects, American gun buyers are falling victim to bad risk analysis.

Being a law-abiding legal gun-owner is kind of like getting vaccinated: you take some personal risks but benefit the community overall. Being the free-rider who isn’t vaccinated in a highly vaccinated community or who doesn’t own a gun in a well-armed low crime community can be the ideal position from a selfish perspective, but lots of people don’t like being that guy.