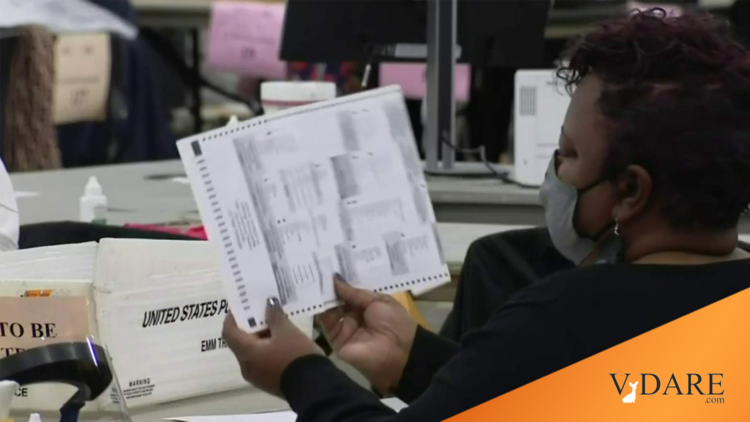 The Wayne County (Michigan) Board of Canvassers announced last night they were deadlocked on certifying its votes. This created an opportunity for the Republican-controlled state legislature to decide the election if Michigan’s most populous county lacked certified votes.

But the two Republicans who voted against certification abruptly flipped just a few hours after the initial vote. They didn’t entirely cave as they included a demand Michigan’s secretary of state conduct a “comprehensive tally” of questionable precinct results. But the two Republican board members ultimately gave liberals what they want: the certification of the votes [Wayne Co. canvassers certify election results after initial deadlock,, by Beth LeBlanc, Francis X. Donnelly and Craig Mauger, Detroit News. November 17, 2020].

Democrats achieved this through outright intimidation and harassment of the two Republican board members, Monica Palmer and William Hartmann. This included doxing their children and where they go to school.

“Just know when you try to sleep tonight, that millions of people around the world now on Twitter know the name Monica Palmer and William Hartmann as two people completely racist and without an understanding of what integrity means or a shred of human decency,” commenter Ned Staebler said. “The law’s not on your side. History won’t be on your side.”

WAYNE COUNTY BOARD OF CANVASSERS - 2 Republican members voted not to certify the ballots- public comment is now open and it is intense. People calling board members racist. This is commenter Ned Staebler: pic.twitter.com/cEsDlxzVXT

The home addresses and personal contact information for Palmer and Hartmann were shared across social media by irate Leftists. Two ordinary citizens facing a deluge of death threats to themselves and their children would be inclined to capitulate.

Liberals celebrated this as a victory for mob pressure.

This is the kind of behavior that is encouraged by our Leftist elites. While they complain of internet harassment to journalists and other establishment pawns, they use this very same weapon against average Americans who just want free and fair elections. It’s disgraceful and national Republicans must demand an investigation into the harassment of these officials.

There’s no greater threat to our democracy than the uninhibited left-wing mob.