Sunday’s front page of the StarTribune newspaper published from Minneapolis/St. Paul included a story about “new Americans” being taught how to navigate Minnesota’s culture as well as the cold and snow — so different from Rwanda and Burundi!

The accompanying photo showed newcomers learning the fine points of shoveling snow at an eight-week class presented by the International Institute of Minnesota: 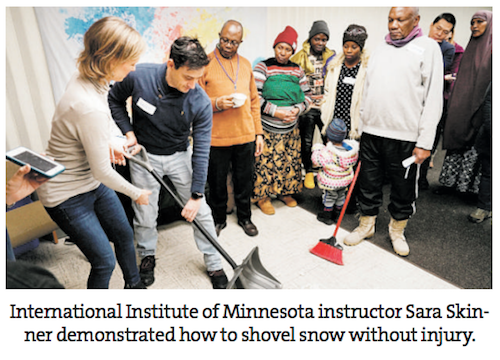 The article gives limited information about the Institute, noting that it has “resettled nearly 25,000 refugees in its centurylong history.”

However a glance at the internet shows that the nonprofit is expanding substantially:

ST. PAUL — At a time when nursing homes and assisted living facilities are scrambling to find employees who can balance a strong work ethic with sensitivity to the needs of vulnerable adults, Jane Graupman believes she has just the solution.

In a word? Refugees. She wants more of them, and she wants to make more room for them and other immigrants in her crowded classrooms. . . .

Meanwhile, technology has a different idea for patient care in nursing homes, namely robots, which are becoming smarter and more capable all the time. So America won’t be needing low-skilled foreigners for that job either.

One gets the impression that refugee resettlement can be a profitable endeavor. The most recent 990 report for the Institute available is for the year ending September 30, 2018, and it shows Executive Director Graupman getting a salary of $106,769. That’s probably decent money in Minnesota. Also interesting is that “government grants” from the taxpayers amounted to $2,294,910.

So uneducated, culturally ignorant immigrants and refugees can be quite enriching for diversity-seeking nonprofits.

‘Life in Minnesota’ class: Shoveling, walking on ice and the nuances of ‘Nice,’ Star Tribune, February 15, 2020

Dorcas Zirirane arrived at a “Life in Minnesota” class in St. Paul carrying her 1-year-old granddaughter on her back in a colorful cloth sling, speaking to her in Swahili. Zirirane was wearing a long skirt with a bold, vibrant pattern traditional to the Democratic Republic of Congo, from which she’d fled as a refugee.

But she’d already adapted her wardrobe to her new home. Zirirane raised the hem of her thin cotton skirt to reveal a pair of thick leggings.

Instructor Sara Skinner also supplements the basic curriculum for refugees with skills specific to the state. Many are related to the cold: how to dress for winter, do the “penguin shuffle” when walking on ice, shovel snow correctly.

This morning’s lesson was on health. Midway through it, Skinner stressed the importance of protecting your skin from the cold, dry air. “If you put Vaseline in your nose at night when you go to sleep that will help your nose not to bleed,” she offered.

The Swahili and Karenni interpreters did their best to translate a phrase that likely left those from warmer climes wondering what they were doing in this bone-chilling land of nasal-greasers.

The number of refugees coming to Minnesota has plummeted since President Donald Trump dramatically reduced the national cap on refugees (18,000 this year, down from 110,000 during Obama’s final year in office). Still, the state has a long tradition of welcoming newcomers and ranks high in its number of refugees resettled per capita.

Of the nearly 900 refugees who arrived in Minnesota in 2019, those from Myanmar were most numerous, followed by Democratic Republic of Congo and Ukraine. But a typical “Life in Minnesota” class includes students from countries all over the globe: China, Burundi, Rwanda and Portugal among them.

Helping new Americans achieve self-sufficiency remains a primary focus of the institute, which has resettled nearly 25,000 refugees in its centurylong history. It is one of five resettlement groups in the state. (Continues)