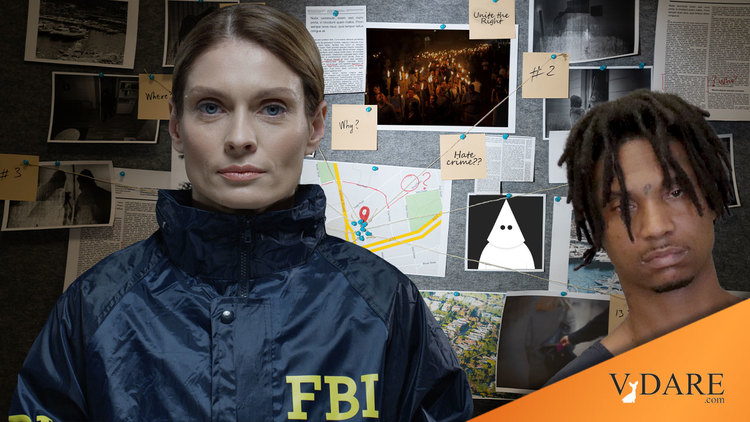 The Main Stream Media and its pet politicians both need to create a new "crisis" to gin up ratings, donations, and politically useful moral hysteria. Thus, Attorney General Merrick Garland held a press conference claiming that we need a "whole of society approach" to fighting "militia violent extremists" and "racially or ethnically motivated violent extremists, specifically those who advocated for the superiority of the White race" [To fight domestic terrorism, AG Garland calls for 'whole of society approach, by Evie Fordham, Yahoo, June 15, 2021].

Leave aside for the moment the federal government's pat on the head for volunteer commissars eager to throw fellow citizens to the state. Leave aside the implications of what a "whole of society" Total War by the government against its own citizens could possibly mean. If a foreign leader spoke in such terms, we'd call him a tyrant, and we'd be right. But forget that for a second.

This is as pure an example of anarcho-tyranny as could be imagined. Where is the evidence of this white crime wave? We are currently in the midst of a record-setting crime wave in major cities, almost entirely sparked by the "racial reckoning." The chief victims of black crime are, of course, mostly other black people. However, the "Community" does not seem to mind. As near as I can tell, "Community" leaders seem to enjoy it. We can only give thanks that they are mostly terrible shots. In the cases where there are black fatalities, many progressives have been so gaslit by the MSM that they blame Trump.

However, there are also white victims. These are mostly ignored by the MSM, grudgingly covered as simply unfortunate random events, like being hit by a falling boulder or struck by lightning. In the Austin mass shooting, the white victim's family does not receive a golden coffin or millions of dollars from the city, but must put up a GoFundMe to help pay for funeral expenses ['He was loved by all who knew him,' family of victim in mass shooting releases statement, by Rachel Bowman, CBS Austin, June 13, 2021].

Still, even that's just the usual savagery that diversity has blessed America with. We also have deliberate campaigns of terror against whites. The latest is an attempt that looks pretty similar to now almost forgotten "DC Sniper" rampage.

A black man accused in a 20-hour, two-state shooting spree that wounded five strangers told cops he was motivated by race and intentionally targeted “military-looking” white men he believed wronged him, police said.

Roberts is also accused of shooting a white man in the back at a hotel in Phenix City, Alabama, the Columbus Ledger-Enquirer reported.

What does the FBI have to say about this? Well, probably nothing. They still can't figure out what could have inspired the attempted assassination of Republican congressmen just a few years ago.

Remember that guy who posted Rachel Maddow clips all over his Facebook page saying GOP was full of traitors and endangering US with treason, then went to a softball field and shot Republicans after confirming who they were?

Not really sure what he was up to, says Andrew McCabe: https://t.co/7nuRh0BJQZ

Of course, even that didn't spur Republican congressmen into action to defend themselves, let alone their mostly white voters. Why are we building a fortress? Because we're on our own.