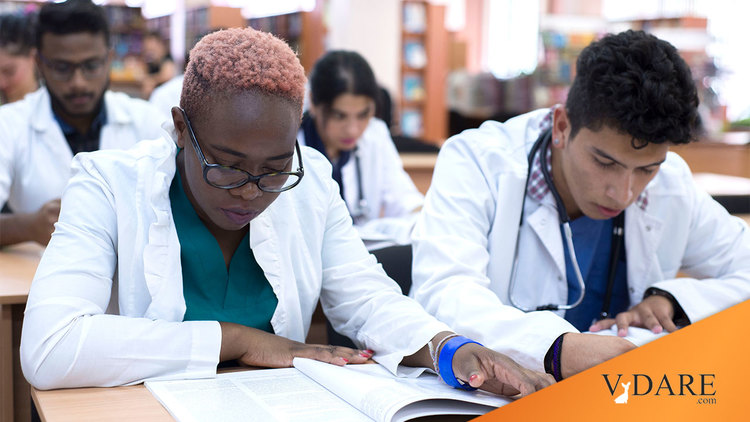 God Help Us All: 79% Of Top Medical Schools Require All Hiring Committees Receive "Unconscious Bias" Training Or Include "Equity Advisors"

Do you want a doctor who can help diagnose your cancer or your implicit bias?

Forty-four percent of medical schools have tenure and promotion policies that reward scholarship on “diversity, inclusion, and equity.” Seventy percent make students take a course on “diversity, inclusion, or cultural competence.” And 79 percent require that all hiring committees receive “unconscious bias” training or include “equity advisors”—people whose job it is to ensure diversity among the faculty.

Those are just some of the findings from a new report by the Association of American Medical Colleges, which together with the American Medical Association accredits every medical school in the United States. The report, “The Power of Collective Action: Assessing and Advancing Diversity, Equity, and Inclusion Efforts at AAMC Medical Schools,” is based on a survey of 101 medical school deans—representing nearly two thirds of American medical schools—who were given a list of diversity policies and asked to indicate which ones they had implemented.

The results paint a striking portrait of ideological capture: At many medical schools, concerns about social justice have saturated every layer of institutional decision-making, particularly the hiring and admissions process, a trend some doctors say will undermine meritocracy and endanger patients.

The report indicates that more than a third of medical schools offer extra funding to departments that hit diversity targets, half require job applicants to submit diversity statements, and over two thirds “require departments/units to assemble a diverse pool of candidates for faculty positions.”

In addition, every school reported using a “holistic admissions” process—a euphemism for affirmative action—that assessed applicants’ grades and test scores in light of their race, lowering the academic bar for groups “underrepresented in medicine.”

“We’re dealing with life and death here,” said Jeff Singer, a general surgeon from Arizona. “I want to know that my doctor got their degree because they are smart and know what they’re doing.”

Released November 10, the report comes in the wake of a yearlong campaign by the Association of American Medical Colleges to inject “diversity, equity, and inclusion” into the accreditation process. A year ago, the group put out guidelines calling meritocracy a “malignant narrative,” a view critics said at the time would lower admissions standards and endanger lives. And in July, it required all medical schools to incorporate “diversity, equity, and inclusion” lessons into their curricula, stating that they should impart a “critical understanding of unjust systems of oppressions.”

The survey appears to have been part of that campaign. All schools that completed it received a score grading their DEI efforts, which marked any policies not implemented as “areas for improvements.” One of the best uses of the survey, the report said, is for schools to show that they are meeting the “accreditation requirements for DEI.”

Feeling the heat of those requirements, medical schools have lowered standards for all students, even the top-performers, to avert a scenario in which dropout rates explode. “Once you take in a cohort of students who struggle, you have to ratchet down the entire curriculum,” said Stanley Goldfarb, a professor at University of Pennsylvania Medical School, a Washington Free Beacon enthusiast, and the father of Free Beacon chairman Michael Goldfarb. “So everyone gets through with much less rigorous courses.”

“If you’re bleeding out from a gunshot wound, you need the doctor who knows how to save your life, not the one who can tell you about implicit bias,” said Laura Morgan, a nurse in Dallas, Texas, who lost her job at a teaching hospital, Baylor Scott & White Health, after she refused, in a recent diversity training, to affirm that all white people were racist.

The Association of American Medical Colleges told the Free Beacon that it supports all of the policies listed in the report, arguing that they “contribute to a diverse, equitable, and inclusive culture and climate for students, faculty, staff, and administrators.”

“Our member medical schools and teaching hospitals have an obligation to address the factors that drive racism and bias in health care,” said David Acosta, the group’s chief diversity officer.

Not all of these policies are entirely new. “Culturally responsive care,” the idea that doctors should have some fluency in their patients’ values and upbringing, has been a staple of medical education since the 1970s, Goldfarb and Singer said, and—in moderation—is an appropriate thing to teach.

Schools are also collecting detailed demographic data on their faculty members and students—an ostensibly neutral practice that has been leveraged for ideological ends. Hiring committees often keep track of faculty promotions by race and gender, the report notes, then use that information to ensure “equity is maintained in advancement decisions.”

All told, 85 percent of schools said they’d used “demographic data to promote change within the institution.”

Eventually, the report implies, that number should be 100 percent. Medical schools are “creating a holistic strategy where DEI is integrated into all operations and mission areas,” the report says. “The findings in this report prompt further exploration of how effective DEI practices can be embedded into the entire infrastructure of medical schools.”

Our top medical schools are so infected with the virus of Diversity, Inclusion, and Equity (DIE), you wonder what type of future sick individuals have at the hands of doctors educated by this perverse ideology.