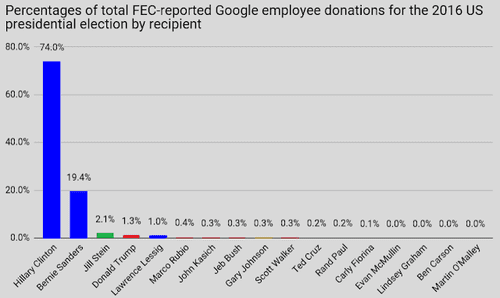 Google: Don't Be Republican; Do The Left Thing

Audacious Epigone
A+
|
a-

This religious service—where rigid intellectual, moral, and spiritual conformity is assumed—fronts as a corporate activity led by chief executives of the country's leading tech company, one of the largest publicly-traded firms in the world:

This particular meeting took place prior to James Damore's defenestration. How a centrist like Damore managed to avoid being raised up as a blood sacrifice at one of these gatherings is anyone's guess.

From the FEC, the distributions of 9,132 personal donations to 2016 US presidential campaigns from Google employees, by candidate and also by party: 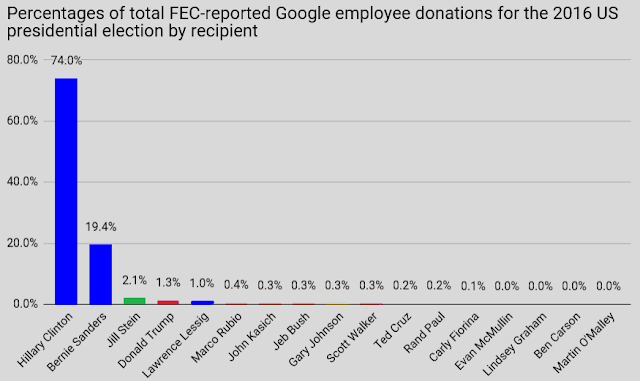 That's where the hive running the world's search engine results is coming from.

A message from a friend with decades of experience in Silicon Valley provided a being hit on the head lesson, describing what should have become common knowledge by now:

I wish the Right understood deeply how much they are considered morally illegitimate in some very important quarters. The Right loses because they are a bunch of rubes, suckers, and fools who do not realize their own good will is not returned in kind by the other side.

In the interest of fairness, the biggest driver of traffic to this humble blog is Google. Or at least it was before this post!