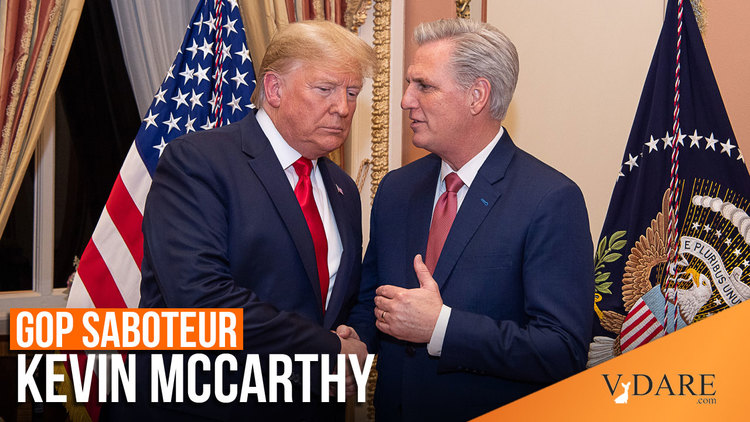 Apparently GOP House Republican leader Kevin McCarthy, backed by GOP donors, has been engaging in a secretive—and until now actually secret—campaign to sabotage Republican candidates who favor the kind of immigration enforcement that Republican voters like.

Rep. Madison Cawthorn (R-N.C.) made a name for himself as a firebrand social media phenomenon who delighted in trolling the left, famously boasting to colleagues that he had built his House office by focusing on communications not legislation.

But the strategy made him vulnerable to forces within his own party that helped end his time in office. Top allies of Kevin McCarthy, the House Republican leader, worked this spring to deny Cawthorn a second term in office, after the Donald Trump-endorsed lawmaker made controversial comments about cocaine use and sex parties in Washington that led McCarthy to announce he had “lost my trust,” according to multiple Republicans briefed on the effort, which has not been previously reported.

How Kevin McCarthy exploited our big money political system to meddle in GOP primaries and protect his own political power.

In many cases, primary voters didn’t know until after the election that McCarthy and his allies were behind the spending barrage. https://t.co/ybII5pUfM6

CLF [a House GOP super PAC, the Congressional Leadership Fund], which is run by Dan Conston, has spent more than $7 million in Republican primaries this cycle, much of it focused on nominating more moderate, and therefore electable, candidates in swing districts. The group also spent millions in attempts to protect incumbents like Michael Guest (R-Miss.), Mark Amodei (R-Nev.), and Jamie Herrera Beutler (R-Wash.), who hail from safer Republican districts, when they faced challenges from more far-right figures.

The group spent nearly $40,000 on turnout calls to help Rep. Daniel Webster (R-Fla.) in a safe Republican seat when he was challenged in the primary by online agitator Laura Loomer, who has described herself as being “pro-white nationalism” and a “proud Islamophobe,” campaign finance records show. In an overwhelmingly Republican Texas district north of Houston, CLF and another group founded by McCarthy allies, American Patriots PAC, spent nearly $1 million to help McCarthy favorite Morgan Luttrell beat Christian Collins. Both Collins and Loomer were endorsed by members of the Freedom Caucus, including Greene.

CLF used a different McCarthy-aligned group this summer to intervene on behalf of Herrera Beutler, who earned Trump’s ire by voting for his impeachment in 2021. Kent, her Trump-endorsed challenger, opposed McCarthy as speaker, denied the legitimacy of the 2020 election and denounced the legal treatment of Jan. 6 rioters as “banana republic stuff.”

But in the weeks before the Aug. 2 primary, two groups, WFW Action Fund and previously unknown group called Conservatives For A Stronger America, began attacking Kent as a closeted leftist, with television ads misleadingly suggesting he wanted to “defund the police” or showing old photos of the former Army Special Forces officer sporting long hair alongside false claims that he supported Sen. Bernie Sanders (I-Vt.).

McCarthy, weasel that he is, is said to be trying to stay close to Trump, presumably in the hope that if a Red Wave gives the GOP back the House, McCarthy himself will not be removed as disloyal. Of course, he should be removed.