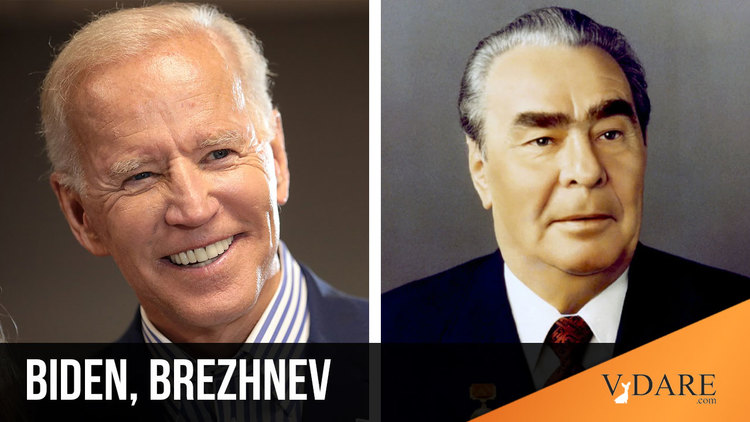 Have We Entered A Brezhnevite Malaise?

Many sectors of the Soviet economy tended to grow pretty robustly in the 1960s, but then in the 1970s things started to go wrong, often for obscure reasons, and by the 1980s clearly something was wrong.

The big problem of course was the communist system and its lack of incentives. But the difference in outcomes between the Soviet Union and the capitalist world hadn’t seemed all that huge in the 1960s. (My guess is that in the 1960s Soviet workers were still pretty scared from the Stalin Era, but also found their current Khrushchev Era bosses rather likable in that they weren’t as cruel as the old guys. But during the Brezhnev Era, workers lost their fear that they’d get sent to the Gulag and slacked off.)

As the world entered the “malaise” era of the 1970s (to use Jimmy Carter’s term for his time), the Soviets seemed to get hit even harder by malaise.

A general impression I’ve had over the last 28 months is that many people have used COVID as an excuse to slack off, both in work and in personal standards (e.g., not bothering to buckle their safety belts or getting into brawls with other airline passengers). Much of wokeness involves denunciations of hard, painstaking work as an outmoded white male thing. Workers would rather play office politics over social media than, you know, work:

I hear that The New Yorker is finally making progress on diversity: they just fired a white person named Erin Somebody.

But...you can't make a diverse omelet without cracking some white eggs, so I'm sure you are OK with it.

These attitudes have spread even to video game design companies, like RockStar, maker of the lucrative Grand Theft Auto game that lets you pretend to be a gang member. A reader points out a Daily Mail article from yesterday:

Zuckerberg fails to hide his irritation at worker who asked if extra ‘vacation’ days will continue post-pandemic – then doubles down by telling lazy staff ‘some of you might just say this place isn’t for you… and that’s ok with me’
Mark Zuckerberg was allegedly ‘visibly frustrated’ after being asked the question by one of Facebook’s Chicago-based employees
He told the all-hands meeting on June 30 that there are a ‘bunch of people’ at his company who ‘shouldn’t be here’
It’s the latest of the [Silicon Valley] CEO’s latest crack down on ‘lazy’ staff after he provided a deluge of cushy benefits for employees during the coronavirus pandemic
In response, a Meta spokesperson said ‘Any company that wants to have a lasting impact must practice disciplined prioritization and work with a high level of intensity to reach goals’

It’s hardly surprising that workers aren’t enthusiastic about reapplying their noses to the grindstone to make their billionaire bosses even richer.

The comments come after Zuckerberg fell out of the top ten list of the world’s richest billionaires in March due to his plummeting Meta stock. He currently ranks No. 17 on the list and has lost a marked $64.4 billion – more than his current net worth of $61.1 billion.

What’s interesting, though, are the various ways Wokeness is used to justify the New Laziness.

Will the tech billionaires figure out the connections between Wokeness and slacking off and cut back on Wokeness?