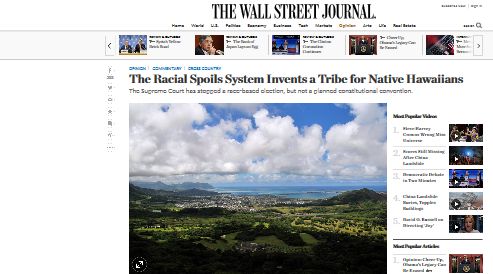 Hawaii (And Elsewhere) How About The "Office of Caucasian Affairs"?

Anonymous Attorney
A+
|
a-

Could a state "Office of Caucasian Affairs" be part of the white future?

The U.S. Supreme Court recently put a stop to the Office of Hawaiian Affairs' attempts create a voter roll of native Hawaiians.  The ultimate goal here was to run an election for delegates to some kind of constitutional convention on the future self-government of native Hawaiians.

In 2011 the state legislature created the Native Hawaiian Roll, a voluntary registration list of voters who, based on ancestry and blood quantum, could theoretically form a tribe. But participation was so low—nine months after its inception, only 9,300 Native Hawaiians had registered, compared with the goal of 200,000—that the Roll Commission bolstered its numbers by importing names from other lists. Then, earlier this year, the Office of Hawaiian Affairs hired Na‘i Aupuni, a private organization with significant connections to the OHA and the Roll Commission, to conduct an election for delegates to a convention that would decide the format of a Native Hawaiian government. The state claimed this election was legal because it was a “private” poll, though it was paid for by state funds. [The Racial Spoils System Invents a Tribe for Native Hawaiians | The Supreme Court has stopped a race-based election, but not a planned constitutional convention, By Keli‘i Akina, WSJ, December 18, 2015]

No doubt about it—however much they try to style it as a "private group", the bottom line is that tax dollars are funding a race-specific project.  It's raw enough that you can see the equal protection offense (though I note that when it comes to government spending, the Constitutional bar on race-specific action is lower).

The typical conservative reaction is to oppose such efforts.  That makes some sense:  why fork over cash for some other race when yours—the white race—gets nothing?

Hawaii itself is actually minority-white, and always has been.

It's amazing to me that there exists, to begin with, an Office of Hawaiian Affairs—an entire government office dedicated to native Hawaiians, and exclusively native Hawaiians.  They've got land (200,000 acres) and a budget of $50 million, the existence of which has not, apparently, been challenged.

Should whites get in on this action?

I say yes.  The only practical way forward for the coming white minority is to acknowledge that we're players in a game that everyone but us is playing.