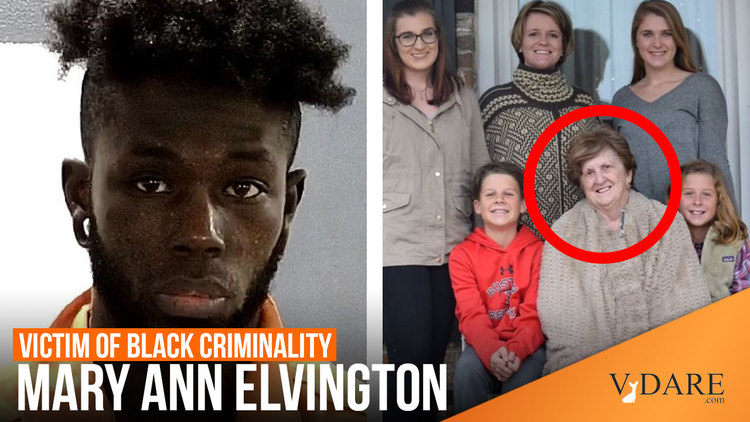 Virtually every day, I wish I could turn away and not pay attention to what’s happening. Years ago, when I was an undergraduate, Steve Sailer told me candidly not to pay attention to race. It wasn’t worth it.

I was prepared to do just this, until a friend of mine I grew up with was murdered in the streets of Atlanta back in 2011. Her sin? Her crime? Being white.

It’s been almost 10 years and not a day goes by that I don’t think about Brittney Watts.

She was gunned down by a black male inflamed by anti-white hatred learned through white privilege teachings in college, causing him to target two other white females in a racial shooting spree virtually no one remembers.

Her Name Is Mary Ann Elvington.

Officials arrested Dominique Davonah Brand, 29, of Marion, for his connection to the kidnapping and murder of 80-year-old Mary Ann Elvington on Wednesday, according to a tweet from the Horry County Police Dept.

A source connected to the investigation told us Brand turned himself in Wednesday to authorities.

Chrysti Shain, with the South Carolina Department of Corrections, said Brand was admitted to SCDC under the Youthful Offender Act on Sept. 19, 2009.

He was readmitted to SCDC on Feb. 10, 2012 after pleading guilty to five counts of second-degree burglary from Marion County. He was sentenced to 15 years, of which he is required to serve one-third before being eligible for parole.

The investigation into Elvington’s death is still ongoing across multiple jurisdictions with the assistance of local, state, and federal authorities.

Several deputies along with the SLED were gathered Wednesday afternoon outside a home on Pine Street in Marion.

We confirmed with Sheriff Brian Wallace that this house was searched in connection to Elvington’s murder case.

Elvington was reported missing and a search was launched Sunday. Her car was located by authorities first in Marion County, and her body was later found Monday.

Elvington’s longtime pastor at Mt. Olive Baptist Church told us he is relieved an arrest has been made so that her family can start to heal.

“We were very excited, very relieved to hear of this person being apprehended, it does bring a measure of peace. Like I said, it doesn’t undo all the evil that has been done but it does help heal the heart to know this person has been stopped” said Stephen Vipperman.

It would be a disservice to the memory of my friend Brittney Watts if I didn’t keep going and document what’s happening across America.

We aren’t supposed to notice the Anti-White wave attempting to capsize the nation our ancestors built on this continent, and the only duty we have is to stand against this force and never, ever capitulate.

No, it’s bigger than that.

It’s to say their names. And to document what happened.

I wish I didn’t care. But, in the memory of my friend Brittney Watts, I do.

Her Name Is Mary Ann Elvington (a loving Christian woman), a beautiful white grandmother, murdered by a black career criminal.

Were white privilege real, the only name preached by the corporate media would be Mary Ann Elvington. Instead, all we hear about is George Floyd.