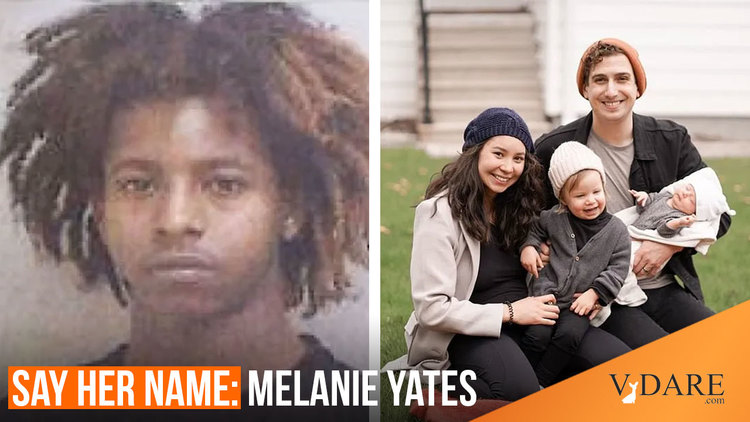 Her Name Is Melanie Yates: While Reading The Bible To Her Daughter, Young White Mother Fatally Shot By Stray Bullet Fired By Black Male

Evil does exist. A young white mother was reading the Bible to her seven-month old baby when she was fatally shot by a stray bullet. The person who pulled the trigger was a 16-year-old black male, Zechariah Myles. Her parents said she wanted a large family, maybe “five or seven kids.”

She is survived by her husband and two young children. Her name is Melanie Yates.

A 16-year-old teenager has been arrested in the case of a woman who was fatally shot by a stray bullet while reading the Bible to her 7-month-old baby daughter last month.

On Tuesday, around 4 p.m. local time, authorities arrested Zechariah Myles on a first-degree murder warrant, according to a press release from the Zion Police Department.

Per the release, the Waukegan Police Department was responding to reports of shots being fired in a local area when they found the alleged suspect and two other young individuals.

Police said Myles, as well as the other two teenagers, “fled but were quickly apprehended.” Police added that three handguns were recovered as well.

Authorities then turned Myles over to the Juvenile Detention Center in Veron Hills “on account of his warrant and additional weapons charges,” police said. WGN9 reported that Myles will be charged as an adult despite being a minor.

Last month, Melanie Yates died after she suffered a “gunshot wound to the head,” according to a GoFundMe set up by the family, who called it the “most devastating news.” She was 23.

Local news outlet WLS-TV reported that the incident happened in Zion, Ill., and police found Yates with the gunshot wound inside her home. She was rushed to the hospital in critical condition.

Melanie’s dad, Shawn Calderon, told WGN-TV that his daughter “was with her baby reading a Bible story to her seven-month-old and praying with her.” Melanie’s mom, Lam Calderon, told WLS-TV that her daughter wanted a large family in the future, perhaps “five to seven kids” total.

Lam added that Melanie’s husband, David, first thought the gunshots were firework noises while he was putting one of their kids to bed, and he eventually found his wife.

“He looked for her, where she was at in the house, and he found her shot in the head,” Lam told WLS-TV.

“He came in and he told me that our daughter had been shot and we didn’t believe him. It was just unfathomable,” said Lam, who added, “We have the hope and the assurance that she is in heaven right now with Jesus and one day we will see her again. That’s what we’re holding onto.”

In the GoFundMe description, the family remembered Yates as “beloved” by many.

“Everybody who knew Lanie knows she loved Jesus Christ with every fiber of her being. There is no doubt whatsoever that she is in heaven at this very moment,” the page reads. “But we on earth miss her very dearly. We miss her passionate, powerful prayers. We miss her infectious laugh. We miss her beautiful singing voice lifting songs of worship. We miss her feisty, witty humor. We miss her dedication to being an amazing, godly mom and wife. We miss her.”

“And we wish with every fiber of our being she was here, but we know she’s in a better place,” the statement added.

Yates is survived by her husband and the pair’s two young daughters.

Melanie Yates’ young children will never know their mother as they grow up, and her husband will always be haunted by how he lost his wife, and the children they never brought into the world. This tragedy should never have happened, but in a country where publicly noticing disproportionate levels of black criminality is a greater sin than blacks actually committing disproportionate levels of crime, such monstrous acts will only continue to occur.

Because until we can do the former without fear of being called a “racist,” sensible gun control laws (adhering to how the Second Amendment was originally intended by the Founding Fathers, ensuring the right to own a firearm was protected by the U.S. Constitution) will remain off the table for discussion.