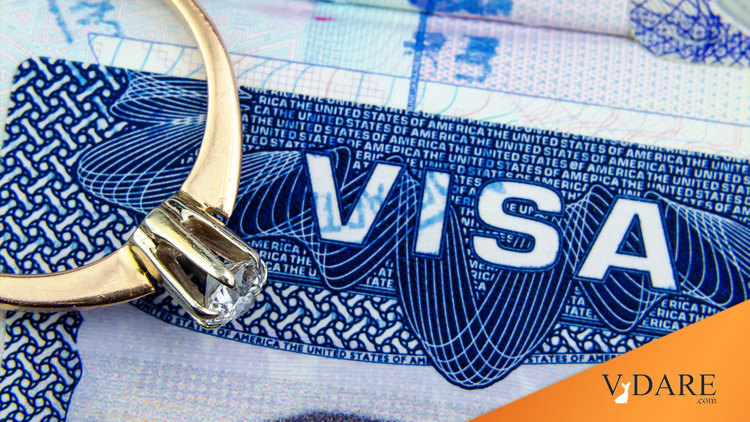 If an illegal alien is afraid she can’t count on Biden to offer an amnesty and citizenship by simply violating the law, she always has bigamy and marriage fraud as a backup plan to stay in the country.

A Zimbabwean woman married not one but two elderly men, one of whom was an 89-year-old wealthy Texan who changed his will to benefit the fraudster, David North of the Center for Immigration Studies has reported [Illegal Alien Marries 89-Year-Old Man for Citizenship and His Estate, June 17, 2022].

The Texan’s daughter revealed the story.

The near nonagenarian, whom North calls Smith, hired the Zimbabwean to care for his sickly wife. When she died, the 43-year-old African declared that she was in love with Smith. The two married. Wouldn’t you know it, he lived “just long enough to file papers for her that gave her a temporary green card, and to change his will, leaving a substantial amount of his estate to his new bride.”

The Zimbabwean was still married to a man back home in Zimbabwe…where she belongs. Though she divorced this presumably African husband, the decree is questionable because she listed her attorney’s office as her residence.

Worse still, the Zimbabwean “then conned another elderly, well-to-do citizen, Mr. Jones, into marriage; he died in April.”

You have to feel sorry for the Smith family.

A will is notoriously hard to break, even with good reason, because it expresses the testator’s wishes, and he or she isn’t around to explain things [Reasons to Challenge a Will, FindLaw.com, January 19, 2018]. In this case, Smith’s heirs must pay a lawyer to fight the African swindler.

Then again, if the Zimbabwean grifter did marry a second man and had a bogus divorce, it seems that a court would readily make Smith’s children whole.

This case aside, marriage fraud is yet another reason to round up and deport every illegal alien in the country. Once an illegal gets hitched, he or she is here to stay.