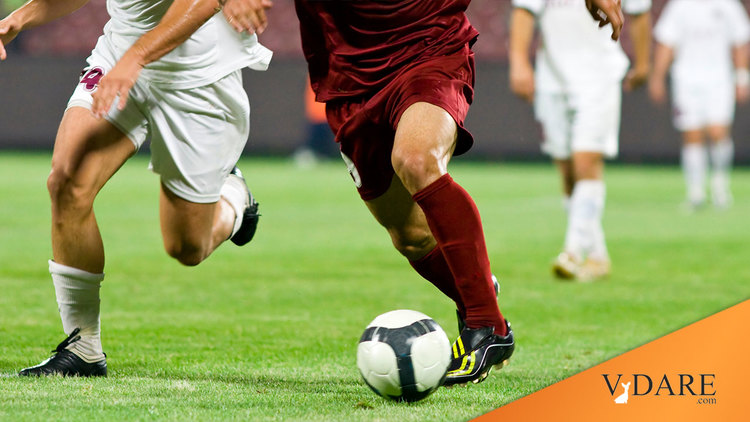 How Gay Is Soccer?

Like most male team sports: evidently, not very. A reader does some counting of top soccer players and writes:

I assume you saw that the opening day of the World Cup was taken up by a lot of media stories about European teams planning to wear a rainbow armband which they later backed down from.

The English media is really, really obsessed with finding a gay male soccer player willing to come out and has been for about ten years. The absence of said out gay players is toted as evidence of prejudice despite increasingly visible inclusivity attempts by the sport’s governing bodies. You can easily find stories about closeted players like this one who claim they are afraid of coming out due to resistance from fans or teammates. Former England star Gary Lineker says he knows of two. I’m sympathetic to the theory that coming out while playing could limit your career, but I would assume that this social pressure pretty much evaporates when your career ends in your early 30s. So I went looking for examples of ex-players who have since come out.
First, what’s the denominator? 1795 players have made more than 50 Premier League appearances since it was founded in 1992. The right tail is very long, 2523 players have made more than 25 appearances. I stopped clicking but there are easily >3,000 unique players who have made at least a single Premier League appearance. The average age of an active player today is 26, so I would estimate something like 2/3 to 3/4 of players who’ve ever made an appearance over the last 30 years are no longer active today. So we are looking at 2,000 or so ex Premier League players. Youngest ex-player is around 30 and oldest in his early 60s.
England is perhaps the world’s most gay-friendly place and anyone coming out is guaranteed a sympathetic media portrayal. So do gay players come out when they retire? It seems not. Google only finds me one ex-Premier League player who has come out after retiring, a player called Thomas Hitzlsperger. He only made 117 appearances in the Premier League and this would put him well outside the top 1,000 players by appearance.

So I’m increasingly sympathetic to your theory that whatever psycholocial traits make men highly interested in team sports make them highly heterosexual too. I looked up the top 20 players by Premier League appearances and checked wikipedia (mainly) to see what their marital status and number of children were. 19 of the 20 have been married and the one who hasn’t (Emile Heskey) has six children. It wasn’t clear whether Sylvain Distin has kids so I marked him down as zero but there is a story in French about him having had an affair. Jermain Defoe is also at zero kids but there seems to have been a paternity test involved. Six of the 20 (Giggs, Ferdinand, Defoe, Terry, Rooney, Distin) seem to have had some extra-marital stuff that the English tabloids dug up. So all-in-all guys who manage to sustain a career as a high-level soccer player seem very, very heterosexual. My casual knowledge of North American team sports is that you see pretty much the same pattern too.

Anyway I find occupational selection by sex, race, and sexual orientation quite interesting but you seem to be the only person who can write about it plainly. You are welcome to use any and all of this analysis. I will never publish it even pseudonymously!