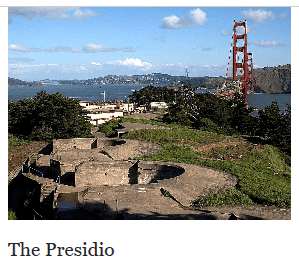 In the mid-1990s in the wake of the huge brouhaha over the The Bell Curve (such as the rebellion of the staff of The New Republic against its editor Andrew Sullivan for daring to publish an excerpt), it finally dawned on me what was actually going on.

It’s like how the U.S. military in 19th Century California installed big coastal defense cannons in the Presidio at the Golden Gate, but not because these rocky headlands were all that valuable unto themselves. Instead the strategy was that if the U.S. Army’s coastal guns could keep the Royal Navy, the French, the Russians, the Japanese or whomever from sailing past the chokepoint of the Golden Gate, the Americans wouldn’t ever have to fight over what was really valuable: the magnificent watershed of the San Francisco Bay.

This is the inverse of what SlateStarCodex calls the motte-and-bailey strategy: instead of withdrawing from the economically valuable land to a fortress in the middle and let your enemies ravage your farms, you put the forts out on the edge at strategic chokepoints. When it works, it works spectacularly well: after 168 years of unchallenged defense and, thus, peace, the San Francisco Bay Area may be the richest place on Earth.

This suggests that the Jewish intellectuals so enraged by public discussion of IQ differences were, deep down inside, less skeptics of IQ science than the truest of the true believers. They assumed that IQ is so overwhelmingly important that if the gentile masses ever were allowed to learn the truth — that Jews tend to be smarter — the moronic peasants would come for this endangered minority with their torches and pitchforks.

(S.J. Gould has been dead for a decade and a half now so we’re unlikely to find out for sure unless his private letters are ever published, but this theory makes him sound less braindead than does the conventional wisdom.)

This view is actually eye-rollingly dumb, as well as morally deplorable. Most of the evidence suggests that Americans who haven’t been wholly indoctrinated by the higher miseducation in crimestop are more or less aware of higher average Jewish intelligence. And they think it’s cool.

Naturalist Edward O. Wilson promoted the word “biodiversity” in the 1990s as part of the Save the Rainforests of Brazil campaign because he thinks having a lot of different kinds of bugs is a good thing. It makes the world more interesting.