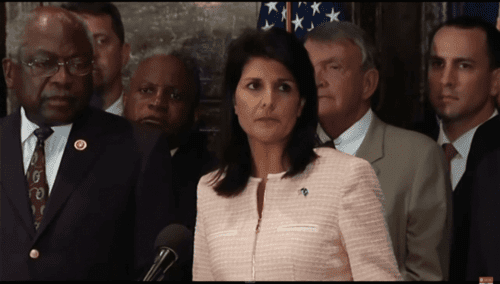 In Defense Of Ann Coulter—Nikki Haley IS Of "Immigrant Stock"

Ann Coulter misspoke trivially when criticizing South Carolina governor Nikki Haley's Battle Flag capitulation on Fox last night, saying "Well, I am a student of American history, so I am appalled by — though I’d really like to like Nikki Haley since she is a Republican. On the other hand, she is an immigrant that does not understand America’s history." (Emphasis added). There's a pompous account by Aaron Goldstein at the American Spectator here.

(Ask Goldstein, who does not disclose that he is himself an immigrant, why TAS has not yet reviewed or even mentioned Adios America! Ask TAS here).

Nikki Haley was indeed born in South Carolina in 1972, but her parents are Sikh immigrants who left India only ten years earlier and immigrated to the U.S. in 1969. [South Carolina governor Nikki's family members to visit US to meet her, by Yudhvir Rana, The Times Of India, November 6, 2010]. This puts her in the category known to demographers as "immigrant stock" (immigrants plus native-born children) and tracked because it tends to differ from the host community significantly and systematically.

It is obviously reasonable to ask how well immigrants, and immigrant stock, have acculturated. I get it myself all the time.

Haley is perhaps not being any more cowardly than other GOP leaders, but she did say "This flag, while an integral part of our past, does not represent the future of our great state." [Nikki Haley calls for removal of Confederate flag from capitol grounds, by Jeremy Diamond and Dana Bash, New York Times, June 23, 2015. Emphasis added].

Of course I am paranoid, but this seems to me ominously close to another capitulation—to the Left's blatantly treasonous goal of swamping the South with mass Third World immigration.