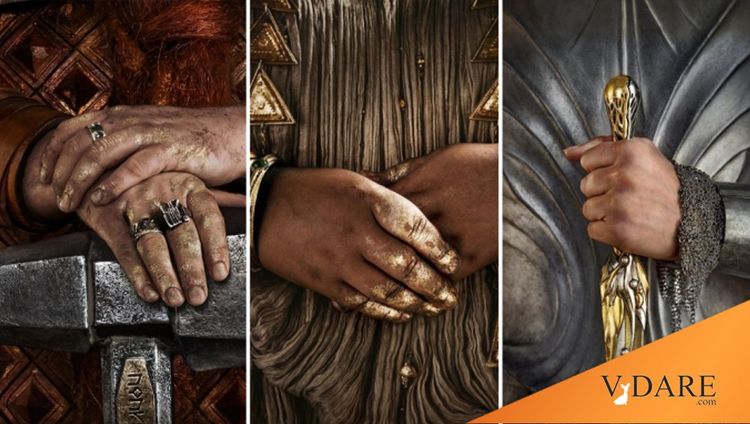 Instead Of Diversifying Tolkien, How About: "Amazon Presents 'The Dr. Yacub Story'"?

Folks complaining about the Hobbits in Amazon’s Rings of Power being multiracial on the grounds that that doesn’t make any sense need to realize that most Americans today know that The Science has proven that race is just a fantasy with no biological reality to it.

You people who think that race has something to do with who your ancestors were are living in an outdated fantasy world. The Science proves that a white is less genetically similar to another white than to a black (who is the most diverse of all).

Genetics has disproved wrong old racist stereotypes such as that individuals tend to be more closely related to some people than to other people. What does who you are related to have to do with race, anyway? Race is just skin deep.

The Science has demonstrated that white people don’t exist. People who believe they are white are just a social construct gaslit by whiteness, which somebody ought to do something about, if you know what I mean.

The problem is that today’s audiences only like intellectual property that’s older than they are, like Lord of the Rings or Batman or Lovecraft. But everything old was written by a white man who probably didn’t have the proper indoctrination on the Whiteness Question.

I got an idea! How many years until Nation of Islam founder W.D. Fard’s pamphlet Lost Found Muslim Lesson No. 2 —the story of the evil eugenicist Dr. Yacub inventing the devilish white race–goes into public domain? Fard disappeared in 1934, so not many can be left.

Somebody should pitch the Dr. Yacub Story to Bezos.