Barack and Michelle Obama don’t like to waste an opportunity, in word or action, to make larger points about contemporary life and culture. In that vein, their choices of artists for their official portraits in the collection of the Smithsonian National Portrait Gallery shine a spotlight on the state of American art. One is an established figurative painter, the other is relatively unknown and a possible rising art-world star. Both are African-American. 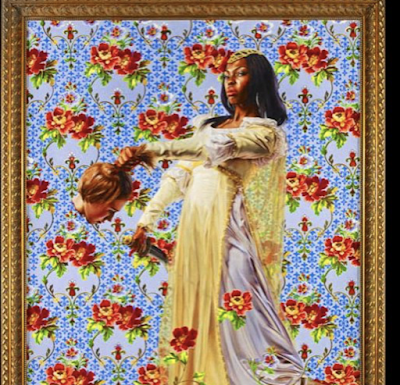 The Obama's favorite artist, who admits he's inspired by a "kill whitey" thing...

In their selection of Kehinde Wiley, for Mr. Obama’s likeness, and Amy Sherald, for Mrs. Obama’s, announced Friday, the Obamas continue to highlight the work of contemporary and modern African-American artists, as they so often did with the artworks they chose to live with in the White House, by Glenn Ligon, Alma Thomas and William H. Johnson, among others. Their choices then and now reflect the Obamas’ instincts for balancing the expected and the surprising, and for being alert to painting’s pertinence to the moment.

With his rendering of President Barack Obama, Kehinde Wiley became the first African American to ever paint an official presidential portrait, but the new-found fame has also drawn attention to some of the artist’s more boundary-pushing past works.

Two paintings from 2012, depicting the Biblical story of Judith beheading the Assyrian general Holofernes, began making the rounds online on Monday. In Wiley’s rendering, Judith is depicted as a black woman and Holofernes as a white woman. 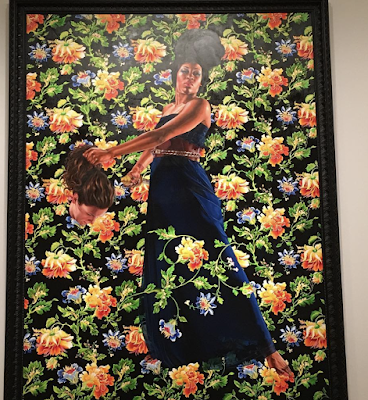 Fans of the Obama portrait will recognize Wiley’s photo-realistic human figures, distinct colors and prominent use of floral backgrounds.

“Judith and Holofernes is from Wiley’s most recent body of work and his first series of paintings to feature female subjects,” a 2012 explanation of the work from the North Carolina Museum of Art foundation reads. “Wiley translates this image of a courageous, powerful woman into a contemporary version that resonates with fury and righteousness.”

In a New York Magazine piece also from 2012, Wiley explained that the impetus for the work came from the renditions of the Biblical scene by Renaissance artists Caravaggio and Gentileschi.

In keeping with his long-running style of painting black subjects in poses based on classic imagery from Western art and iconography, Wiley depicted Judith as a powerful black woman. His reasons for keeping Holofernes white and changing the general into a woman remain less clear.

A representative for the artist did not immediately respond to request for comment from TheWrap.

Is there a white artist who has painted a portrait of Donald J. Trump (or any other white person) holding the decapitated head of a black person?

So why would the Obamas select a black artist who has a penchant for painting black people holding the decapitated heads of white people?