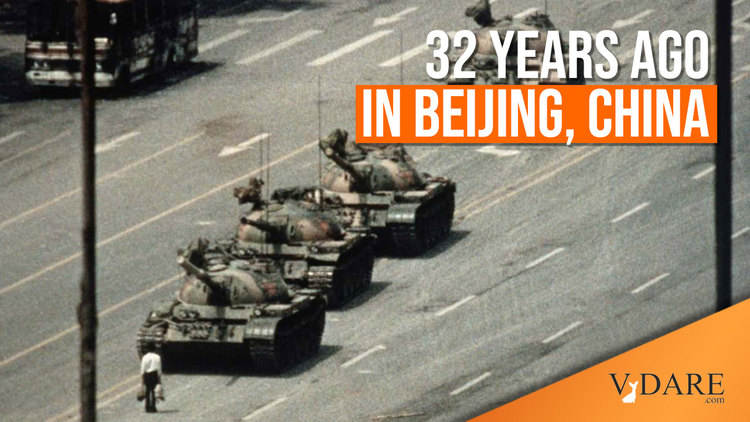 Monday and Tuesday marked the centenary of the 1921 race riot in Tulsa, Oklahoma, above. Thursday and Friday saw the 32nd anniversary of the Chinese reform movement's crushing in Peking's Tiananmen Square.

When it comes to rewriting history our báizuŏ, our Tutsi ruling class of self-hating whites, do their best, but they are no match for the ChiComs.

Thursday-Friday this week marked the 32nd anniversary of the killings in Peking's Tiananmen Square, when the ChiComs crushed the reform movement that had roiled China for several weeks prior. The death toll there is unknown and unknowable; plausible estimates are in the high hundreds.

It's been largely forgotten now how widespread was the desire for reform in China back then. It wasn't just a few young malcontents that were fed up with corruption and lack of freedom; there was institutional support for reform in the party, and even in the army.

Zhào Zĭyáng, who was the General Secretary of the Communist Party, took the side of the reformers. Xú Qínxiān, the general commanding the 38th Group Army that defended Peking, when he was ordered to mobilize against the protestors, refused.

They both suffered for their integrity. Zhào spent the rest of his life under house arrest in Peking. He died in 2005. General Xú got five years in jail and a permanent ban from Peking. He died in January this year, unrepentant. Quote from him: "I'd rather lose my head than be a criminal in the eyes of history."

Most to the point, they have both been thoroughly unpersoned — or, as we say nowadays, canceled. Among educated Chinese people under the age of thirty, I doubt if one in five recognizes the name Zhào Zĭyáng; for General Xú Qínxiān, it would be more like one in a hundred.

And the crushing of the reform movement on June 3rd-4th, 1989 has been completely memory-holed. Young Chinese people, even quite well-educated ones, know nothing about it.

Chris Chappell over at the China Uncensored vlog on YouTube had some fun with this on Wednesday.

You need to know that the Chinese Communist Party is coming up to a huge celebration on July 1st to commemorate its founding a hundred years ago. There have been all sorts of media events in the run-up to July 1st. Chris describes one of them.

Clip:  Here's a poster series of key events during the party's 100-year path to glory. They're doing one poster for each year since 1921.

Like: In 1987 the poster is about the 13th National Congress. In 1988 it's about the establishment of the Hainan Special Economic Zone. And in 1990, it's about the opening of the Shanghai Stock Exchange.

Can't we do better? After all, the Biden administration, just like the ChiComs, draws inspiration from Marxism. At any rate the flying of Black Lives Matter banners by our embassies abroad, as reported by Radio Derb last week, was fully approved, perhaps actually ordered by Biden's State Department; and the co-founder of Black Lives Matter, as I also reported last week, describes herself as a Marxist.

I'd be highly surprised if there were not other self-described Marxists in, or actively adjacent to, the Biden administration.

If rewriting history is, at it seems to be, a Marxist thing, how come China's Marxists are so much better at it than our Marxists? If the ChiComs can so thoroughly memory-hole the Chinese people killed by their own army in June of 1989, why can't Biden's people memory-hole those white people killed by blacks in the Tulsa riot 68 years earlier?

My fellow Americans, we face a memory-hole gap …