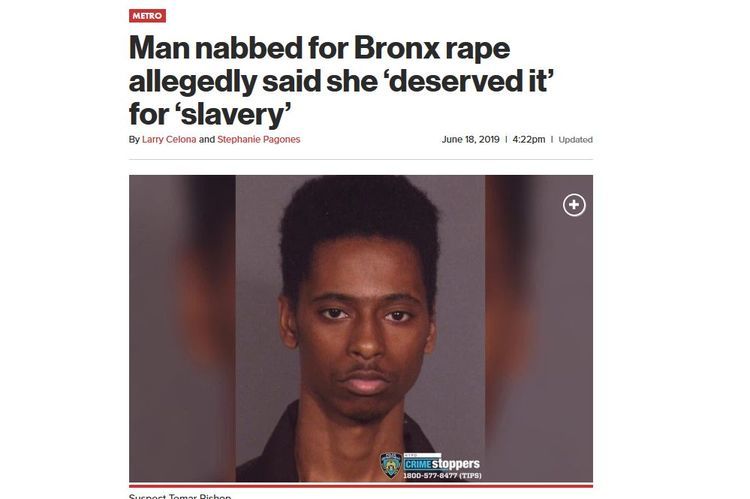 The NCVS data for 2018 came out last month. That's the National Crime Victimization Survey, a huge nationwide survey done every year by the U.S. Census Bureau asking people if they were the victim of a crime that year.

The NCVS is a great data source on crime because, for one thing, the survey sample is huge—243,000 respondents in 2018—and for another, it counts victim reports whether or not a crime was reported to the police.

You need to download and unzip the data tables from the Bureau of Justice Statistics website to get to grips with the interesting stuff. I can't do that for annoying technical reasons, so I'm just going to quote people who have.

Heather Mac Donald over at City Journal has been on the case of course. She notes a curious thing about interracial crime. As I reported here at VDARE.com back in 2012, quote from me:

Exact numbers vary year to year, but of single-offender interracial (black-white) crimes of violence, excluding homicide, 80 to 85 percent have a black perp.

Well, says Heather, that number is changing. Quote from her:

There were 593,598 interracial violent victimizations (excluding homicide) between blacks and whites last year, including white-on-black and black-on-white attacks. Blacks committed 537,204 of those interracial felonies, or 90 percent, and whites committed 56,394 of them, or less than 10 percent. That ratio is becoming more skewed, despite the Democratic claim of Trump-inspired white violence. In 2012-13, blacks committed 85 percent of all interracial victimizations between blacks and whites; whites committed 15 percent. From 2015 to 2018, the total number of white victims and the incidence of white victimization have grown as well. [A Platform of Urban Decline, September 23, 2019]

Just savor that for a minute. Black on white violence has always been far more common than white on black; and the disproportion is getting worse. And remember, this is by victim reports, not arrests or convictions.

As Heather says, this reality is utterly at odds with the official narrative of vicious "white supremacists" hunting down and assaulting helpless black bodies.

The blogger Inductivist notes that the percentage of Hispanics who report having been victimized by serious crime is 2.1, and for blacks the number is the same, 2.1. For whites it's 1.6.

If you use this victimization rate as a proxy for crime rates by race, and even allowing for the fact that blacks likely assault Hispanics more than Hispanics do blacks, those numbers cast doubt on Ron Unz's argument that the Hispanic crime rate isn't much different from the white rate.