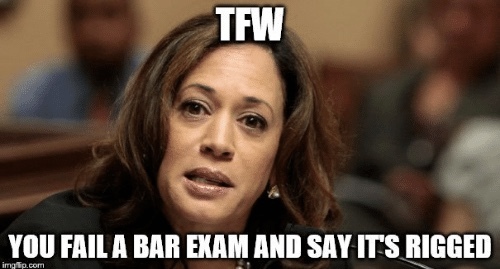 Kamala Harris Got Into Law School Through an Affirmative Action Program

For 50 years, the Legal Education Opportunity Program has made law school accessible for disadvantaged students.

Elizabeth McGriff ’96 was a young single mother when she enrolled at UC Hastings through the Legal Education Opportunity Program (LEOP), which admits students from adverse backgrounds and supports them to succeed. Now, as the program approaches its 50th anniversary, McGriff has returned to take the helm as director, ensuring that LEOP cultivates the next generation of diverse legal professionals.

LEOP offers admission to approximately 50 high-achieving students each year—up to 20 percent of the class—who have experienced major life hurdles, such as educational disadvantage, economic hardship, or disability. The majority are students of color. Besides traditional admissions criteria, such as grades and LSAT scores, the program also considers students’ overall potential and the obstacles they’ve overcome. “These are extraordinary students who have been playing while injured in the game of life, but all they do is win,” McGriff said.

Once students enroll, LEOP supports them throughout their tenure at UC Hastings, offering a weeklong orientation, academic counseling, practice exams, and help preparing for the bar exam and job interviews, among other resources and services.

McGriff knows the benefits of LEOP firsthand. She was working as a teacher when she decided to attend law school in 1993 to better advocate for underserved communities. Her passion for social justice was inspired in part by her mother, Lulann Sapp McGriff, a civil rights activist who was a four-term president of the San Francisco chapter of the NAACP.

In the late 1960s, movements to protest the Vietnam War, protect the environment, and defend the rights of women and minorities swept campuses across the country. At UC Hastings, this spirit animated student activists to push the school to expand minority admissions.

After Martin Luther King Jr. was killed in 1968, faculty, students, and alumni launched a memorial fund in his name to support minority recruitment. The student government, known as Associated Students, instituted a mandatory fee reserved for financial aid for minority students. Additionally, the Thurston Society, an honorary academic group, began advocating for a program to increase minority enrollment by considering admissions criteria beyond test scores and grades. “Law schools were very exclusive and elite at the time, and there were lots of barriers for people who didn’t come from wealth or multigenerational lines of professionals,” McGriff said. “There weren’t many students of color and even fewer who came from challenged backgrounds.”

In the fall of 1969, Dean Arthur Sammis launched the Minority Admissions Program (later renamed LEOP) with an initial class of 40 students. The Thurston Society helped recruit candidates, and a committee of students and faculty evaluated applicants based not only on LSAT scores and GPAs but also on community involvement, motivation, letters of recommendation, and financial need. Within three years, the program increased minority enrollment from just 14 students to 140.

Even though the Thurston Society offered a tutoring program for LEOP students, many early participants struggled in the competitive law school environment. In response, in the 1970s, the program added additional support, including one-on-one mentoring from attorneys of color. By the end of the decade, UC Hastings had one of the largest legal education opportunity programs among public law schools in the nation. LEOP went on to count many prominent alumni among its ranks, including U.S. Senator Kamala Harris ’89; San Francisco Public Defender Jeff Adachi ’85; Adelmise Warner ’01, chief counsel at Pandora; and Andrew Houston ’07, procurement counsel for the University of California’s Office of the General Counsel.

Other than her parents getting divorced when she was 7, what adversity did Kamala Harris overcome? Her parents both earned doctorates. Her mother was a cancer researcher. Her father was a Stanford professor.

I’m guessing the whole “adversity” spin was just added after the 1996 Proposition 209 made racial affirmative action illegal in California government institutions like Hastings law school. Harris went to Hastings from 1986-1989 when it was more or less legal to have affirmative action in California government as long as you didn’t use the Q word “quota.”

Here’s a 2016 press release from Hastings:

SAN FRANCISCO (UC Hastings) — University of California Hastings College of the Law is proud to congratulate trailblazer Kamala Harris ’89 on her election to the United States Senate. …

That sense of purpose led her first to Howard University in Washington, D.C., America’s oldest historically black university, then to UC Hastings, which suited her aspirations and lifelong bent toward activism. She served as president of the Black Law Students Association (BLSA), in a regional post for BLSA’s national parent organization, and as an advocate for greater campus diversity as part of the Legal Education Opportunity Program.

UC Hastings created the Legal Education Opportunity Program (LEOP) in 1969 to make an outstanding legal education accessible to those who come from disadvantaged educational, economic, social, or physical backgrounds. UC Hastings understands that being subject to significant adversity may have prevented applicants from attaining numerically-measured goals that fully reflect their motivation, talent, and academic and professional ability.

In addition to completing the general application for admission, those applying through LEOP are required to address questions on the LEOP Application Supplement and are strongly encouraged to submit a second personal essay detailing the adversity they have encountered.

Once at UC Hastings, students in LEOP are enrolled in the same courses as the rest of the student body, and participate fully in the life of the College. However, students admitted through LEOP are also provided with the opportunity to participate in a cooperative academic support program committed to their success in law school and in the legal profession. This academic support program, which begins with a week-long orientation prior to the beginning of school and spans a student’s entire stay at UC Hastings.

… Applying through LEOP
The Legal Education Opportunity Program (LEOP) offers special consideration in admission to applicants who have been subject to significant adversity that may have prevented them from attaining numeric criteria that fully reflect their motivation, talent, and academic and professional ability. While standard numeric criteria are considered in LEOP admissions, added emphasis is placed on non-numeric criteria.

Applicants interested in applying through LEOP must address all pertinent questions (listed below) on the LEOP Supplemental application. Answers to these questions will be used by the LEOP Committee and by the Admissions Office. …

– Describe the financial situation of your family from birth to college entry. Please include sources of income, income estimates, number of household wage earners, and number of dependents. Please describe any unusual expenses.

– Please describe the occupation(s) and the educational background(s) of the person(s) who raised you.

– Describe your early educational experiences through high school. Discuss the expectation level of and support for educational and career achievement in your family and community. What impact, if any, did it have on your education?

– Describe any paid or unpaid test preparation, academic support, or tutorial services you have used since elementary school.

– Identify and describe the community(ies) in which you resided from birth to age of college entry. Describe any bias you faced as a member of such community(ies) and explain what impact, if any, it had on your academic performance.

– Are you an immigrant or the child of immigrant parents? If yes, please include the country of origin, year of arrival in the U.S., and the reason for immigrating.

– If English is not your first language, how old were you when you first learned English? Was English the primary language spoken in your home?

– Have you had any learning or physical disability that may have adversely affected your academic performance? Please indicate what accommodations, if any, you were provided in high school and college. If possible, please include supporting documentation of your disability and/or accommodations.

– LEOP applicants are strongly encouraged to submit an additional personal statement in which they identify and describe in detail the challenges and obstacles that they have faced and the impact these challenges may have had on their academic preparation. Applicants should include specific information on what they have done to meet and/or overcome these challenges.

For over 50 years, American society has been demanding of its nonwhite elites that, in reward for career privileges, they concoct statements about how much they have been victimized by whites. Is it any surprise that eventually people come to believe their own self-advocacy?

Thanks to iSteve commenter Thomas for the tip.