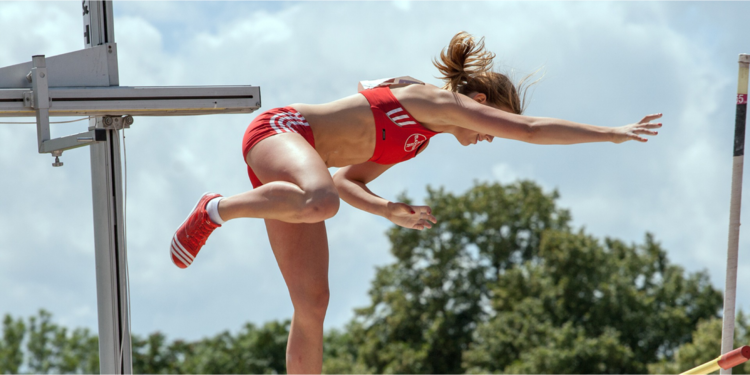 Lady Pole Vaultresses: One Way Rich Men Keep Their Daughters Off The Pole

Earlier on women's pole vaulting: Human Biodiversity at the Olympics

I rather like niche sports where there isn’t so much competition that only the most perfect genetic specimen for that sport stands a chance. I’m classist, but I rather like old time sports where wealthy sportsmen and sportswomen had an advantage.

For example, when women’s pole-vaulting was introduced a few decades ago, the pioneers tended to very nice looking. Men pole-vaulters have tended to be handsome as well. I can recall the TV commentators for a track meet about 50 years ago commenting to that effect: the event demands a nice balance of litheness along with both upper and lower body strength. Over the generations, Olympic athletes have tended to get funnier looking, as increased competition increasingly selects for whatever genetic oddity can best be exploited by that event. But pole-vaulters tend to remain looking like an ideal of an athlete that an ancient Greek sculptor would have recognized.

But, I suspect, another reason was that the early lady pole-vaulters tended to be the daughters of rich men of athletic inclination with good looking wives who were willing to pay for their daughters to pursue a wholesome sport at which they could have some success because practically nobody else in the state had even tried it yet.

Pole-vaulting requires many of the same tumbling skills as cheerleading, but it tends to be a notch up the social class ladder for girls. There are not yet any well-known cases of a pole-vaulter’s mom hiring a hit man to take out her daughter’s rival.

I noticed back in the 1970s that nurture as well as nature played a big role in pole-vaulting because my high school’s archrival, Crespi HS, had the five Curran Brothers.

This was attributed to their growing up having a pole-vaulting pit in their backyard.

I always imagined that the Curran were rich kids with a huge backyard (by Los Angeles’ cramped standards) and a state of the art set-up.

For example, here is the one built by American Olympian Sandi Morris (right) and her dad.

I finally tracked down a home movie of the adolescent Currans practicing in the 1970s.

Instead, they were courageous maniacs: they ran diagonally across their small backyard to the crossbar at the corner of their brick walls and landed on a few old mattresses they’d scrounged.

But, still, it really helps in pole-vaulting if your dad can shell out.

A good example is a young lady named Collins Tuohy.

You probably saw her played by Lily Collins (Phil Collins’ daughter) in the 2009 hit movie The Blind Side. That’s a movie by a couple of Southern conservatives, director John Lee Hancock and journalist Michael Lewis, about a rich Republican couple in Memphis, played by Sandra Bullock in her Oscar-winning role and country singer Tim McGraw, who adopt a giant black homeless youth named Michael Oher and help him get a scholarship to play left tackle for the Ole Miss football team.

At Ole Miss, the father, Sean Tuohy, still set the Southeastern Conference record for most assists in a single basketball season, while the future Leigh Ann Tuohy was a cheerleader. Sean came to own 85 fast food outlets (although as Lewis notes, Sean cheerfully admits that he owned them to the extent that he could pay off all the loans he’d taken out).

Their daughter Collins Tuohy became the Mississippi girls high school pole-vault champion. (How many competitors did she have?) Then, at Ole Miss, she followed her mom as a cheerleader.

And since then she has married Cannon Smith, a football player at the U. of Miami, who is the son of Fred Smith, the business genius billionaire who invented FedEx.