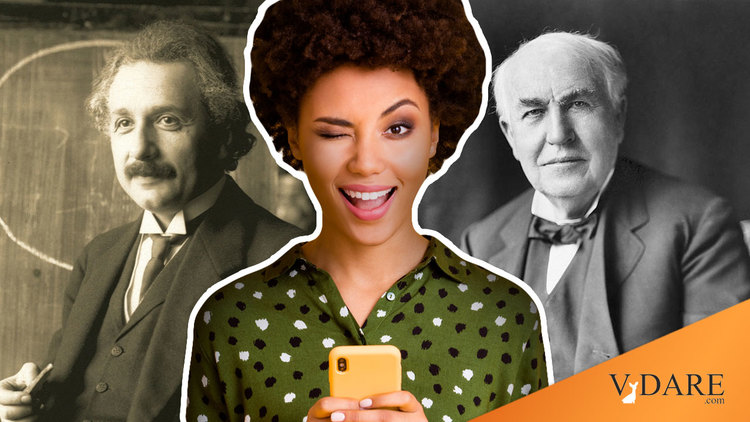 By Thomas B. Edsall

In the international competition to produce a work force equipped to cope with accelerating rates of technological innovation, the United States is leaving hundreds of thousands of highly capable people by the wayside, perhaps even millions.

“Current talent search procedures focus on the assessment of mathematical and verbal ability,” wrote David Lubinski of Vanderbilt and Harrison J. Kell, a senior researcher at the Educational Testing Service, in “Spatial Ability: A Neglected Talent in Educational and Occupational Settings.” Lubinski and Kell stress the failure of many of such searches to test for the cognitive skill known as spatial ability.

Lubinski of Vanderbilt and Harrison J. Kell, a senior researcher at the Educational Testing Service, in “Spatial Ability: A Neglected Talent in Educational and Occupational Settings.” Lubinski and Kell stress the failure of many of such searches to test for the cognitive skill known as spatial ability.

This omission, they continue, leads to

a substantial missed opportunity. Many spatially talented adolescents may never approach their full potential due to a lack of opportunities to develop their skills. A great loss occurs at talent searches that identify intellectually precocious young adolescents.

What is spatial ability?

“Spatial ability, defined by a capacity for mentally generating, rotating, and transforming visual images, is one of the three specific cognitive abilities most important for developing expertise in learning and work settings,” wrote Gregory Park, an independent researcher, Lubinski and Camilla Benbow of Vanderbilt in Scientific American.

My impression is that 3-d cognitive skills are less highly correlated with the general factor of intelligence than most other cognitive skills. For example, my father was not an academic star, especially not in verbal subjects, making it only through junior college. But his 3-d ability enabled him to enjoy a productive 40+ year career as an aeronautical engineer.

Two of these, quantitative and verbal ability, are quite familiar due to their high visibility in standardized tests like the Scholastic Aptitude Test. A spatial ability assessment may include items involving mentally rotating an abstract image or reasoning about an illustrated mechanical device.

“While those with verbal and quantitative strengths have opportunities to be identified by standardized tests or school performance,” Park, Lubinski and Benbow argue, “someone with particularly strong spatial abilities can go unrecognized through these traditional means.”

In his paper, “Spatial ability and STEM: A sleeping giant for talent identification and development,” Lubinski further explains that the failure to test for spatial ability has left a reservoir of potentially productive workers untapped, people who would not only thrive in the marketplace but who would also make significant contributions to the national economy:

“Spatial ability is a powerful systematic source of individual differences that has been neglected,” according to Lubinski. “It has also been neglected in modeling the development of expertise and creative accomplishments.”

There are several essential occupations that all modern societies require and for which outsourcing is not possible. Master carpenters, electricians, mechanics, and plumbers, among others, are needed to maintain and build complex infrastructures.

Spatial ability testing could, then, prove effective in identifying the “many (people) with talent in spatial/mechanical ability (who) possess ability/interest patterns that are ideally suited to these occupations.”

In “Spatial Ability for STEM Domains,” Jonathan Wai of the University of Arkansas, Lipinski and Benbow make three claims:

First, spatial ability is a salient psychological characteristic among adolescents who subsequently go on to achieve advanced educational and occupational credentials in STEM. Second, spatial ability plays a critical role in structuring educational and occupational outcomes in the general population as well as among intellectually talented individuals. Third, contemporary talent searches miss many intellectually talented students by restricting selection criteria to mathematical and verbal ability measures.

Interestingly, some studies link spatial ability with superior performance in sports. In “Relation between sport and spatial imagery: comparison of three groups of participants,” Sylvie Ozel and Corinne Molinaro, both of the University of Caen, and Jacques Larue of the Université d’Orléans found that when comparing the spatial skills of athletes with those of non-athletes, the athletes “obtained significantly shorter response times than those of the non-athletes. We suggest that the regular practice of spatial activities, such as sports, could be related to the spatial capacities of the participants.”

Excellent suggestion to look for students with strong spatial cognitive skills. Pencil and paper tests are good at finding the verbally proficient and those strong at equations, but finding those who can deal with 3-d reality in their mind’s eye would seem like a trickier challenge. Testing experts can weigh in on the question of whether most schoolchildren are currently tested enough for skills like being able to correctly mentally rotate a 3-D object.

There are other forces at work in academia and the workplace that result in a failure to recognize talent.

Children at the top of their 3rd grade mathematics class are much more likely to become inventors, but only if they come from high-income families. High-scoring children from low-income or minority families are unlikely to become inventors. Put differently, becoming an inventor relies upon two things in America: excelling in mathematics and science and having a rich family.

Keep in mind, however, that a search for “Lost Einsteins” (why not “Lost Edisons?”) to be the inventors of the future is most likely to find fewer black girls and more white boys, due to the male advantage in average spatial reasoning ability (vs. the tendency toward a female advantage on the verbal side).

Indeed, Chetty’s own evidence suggests that a more effective strategy for boosting the innovativeness of our economy is for Americans to work harder to find overlooked young Edisons who aren’t all that different from the original Edison: white males from between the coasts.

As usual with Chetty, most of his specific findings based on his usually colossal sample sizes are illuminating, although the general message he emits is carefully crafted not to raise in casual readers many doubts about the conventional wisdom. Chetty’s reputation among the very highbrow masses is that his findings are Worthy but Boring, while I find his work Fascinating and Subversive.

One of Chetty’s more curious findings in “Lost Einsteins” is that blacks currently earn 30% as many patents per capita as whites, which if true, would be most encouraging. But, I think, for once Chetty was using too small of a sample size: only 452 former NYC public school students.

By the way, my 2017 column “Lost Edisons” understated Einstein’s interest in inventing. Einstein was no Edison as an inventor, but he and Leo Szilard worked from 1926–34 to invent the Einstein refrigerator.

From 1926 until 1934 Einstein and Szilárd collaborated on ways to improve home refrigeration technology. The two were motivated by contemporary newspaper reports of a Berlin family who had been killed when a seal in their refrigerator failed and leaked toxic fumes into their home. Einstein and Szilárd proposed that a device without moving parts would eliminate the potential for seal failure, and explored practical applications for different refrigeration cycles. Einstein had worked in the Swiss Patent Office, and used his experience to apply for valid patents for their inventions in several countries. The two were eventually granted 45 patents in six countries for three different models.[2]

It has been suggested that most of the actual inventing was done by Szilárd, with Einstein merely acting as a consultant and helping with the patent-related paperwork,[2] but others assert that Einstein contributed design work to the project.[3]

The refrigerator was less efficient than existing appliances, although having no moving parts made it more reliable; the introduction of non-toxic Freon — later found to be responsible for serious depletion of the Earth’s ozone layer — to replace toxic refrigerant gases made it even less attractive commercially. …

So non-toxic freon provided a chemical solution for the big safety problem with refrigerators that the world’s greatest physicist had identified. (Reminds me of the assume-we-have-a-can-opener joke where a starving physicist, chemist, and economist shipwrecked on a desert island compete to come up with solutions drawn from their fields of expertise about how to open a can of beans they find on the beach.)

That happens a lot in R&D: you work for years to solve a problem one way and come up with a pretty good solutions, but then somebody blindsides you with a great solution.

But then sometimes your seemingly forgotten work proves useful in a new situation:

Although the refrigerator was not a commercial success, the Einstein-Szilard pump was later used for cooling breeder reactors, where its inherent reliability and safety were important.[2]