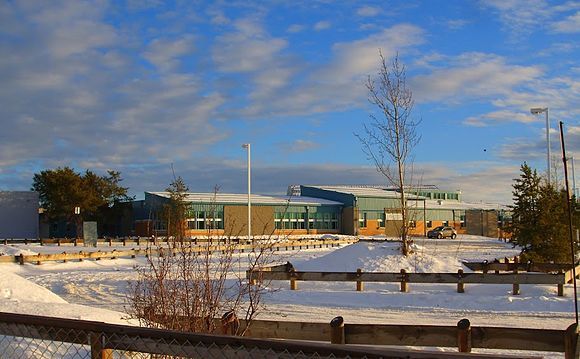 Mass Shooting In Canada Is An Indian Reservation Story, Not A "Gun Control" Story

A shooting at Saskatchewan High School has Americans asking themselves "Hey, I thought Canada had gun control", and also "where exactly is Saskatchewan"—a question many people in Central Canada might have difficulty answering. For the record, Saskatchewan is north of Montana and North Dakota,is bigger than both because there are only ten provinces in Canada, and has  a population of a little over a million, about 12 percent of whom are Canadian Indians. (Also known as Native Canadians, and—the current official term—"First Nations.")

When VDARE.com Editor Peter Brimelow sent me a Reuters story about the shooting, he asked if the race of the shooter, when reported, would make it (A) an Immigrant Mass Murder, (B) a Disgruntled Minority Massacre, or (C) a Great White Defendant story (like Norway or Charleston) which will be blamed on "racism."

I pointed out that it was (D) an Indian reservation shooting—the story said :

Chief Bobby Cameron of the Federation of Saskatchewan Indian Nations, which represents more than 70 of the province's Indian bands, said a few students were in surgery Friday evening in Saskatoon, the province's largest city.

"Everyone is still in shock and disbelief," Cameron said. "It's a very, very horribly tragic event."

It is not, however, the first horribly tragic event, in La Loche, which according to a story published earlier this year, has been suffering an epidemic of suicides.

When the sirens wail in La Loche, people can't help but wonder if it's yet another suicide

La Loche is not technically a reservation, it's an isolated Northern village where almost everyone is Indian. How isolated? Here's a picture of the main street—the word "Hilta", bolted below the stop sign is, I believe, the Dene Language word  for "Stop": 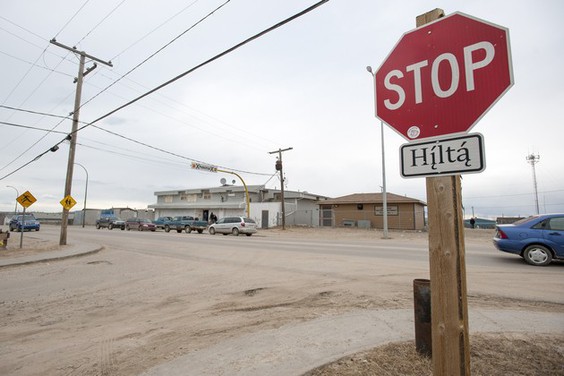 Last year's  suicide story emphasized the problems of an Indian community in the way this year's shooting story probably won't:

The reasons are multiple and complex. Lemaigre said perhaps the biggest factor is loss of cultural identity in a community that’s predominantly Dene.

When she first came to La Loche in 1984 to work at the school, every child spoke Dene. When she checked back in 2012, just four of 63 preschool children could do so.

“That abrupt change is a huge contributing factor to the pain inside our community,” Lemaigre said.

Many in La Loche went through residential schools or are descended from those who did. La Loche is isolated, with few amenities. It has no hotels, no sit-down restaurants, no movie theatres or recreation centres. It doesn’t even have a bank.

Leonard Montgrand, head of the community’s Friendship Centre and a residential school survivor, said the experience has led to family “dysfunctionalism.”

“This caused a lot of parenting problems and a lot of addictions problems among a lot of our elders and our ancestors before that,” Montgrand said.

“When a child or young person grows up seeing all this despair, loneliness and the addictions and everything, it becomes very heavy on them.”

Well, the displacement he's experiencing is similar to what many white Americans have experienced recently, either as a result of white flight, or mass immigration, but the idea that alcoholism in an Indian village is caused by white people's actions in the past is, frankly, a crackpot theory. Alcoholism is hereditary—Indians have more of it because they were exposed to alcohol later in history.

A similar massacre occurred in on the Red Lake Indian Reservation in Minnesota in 2005. In a story I wroted called Of The “Thirty Deadliest” Shooters, At Least A Dozen Are Not White Males, I had teenaged Chippewa  gunman Jeff Weise on my list:

That's the same thing you should be thinking here.  For more on Reservation life, see