Maywood, CA, Sinks Under The Weight Of Illegal Aliens

In 2006, we published an article on Maywood, California, a town that had just decided that it was "sanctuary city.":Report From Occupied America: Maywood, CA—”Small Town USA To Illegal Sanctuary City…In Just Three Decades!x, By Bryanna Bevens, February 09, 2006.

Here are some Census Facts from that article:

At LAT, "Maywood to hire others to run the city." The city's 96.4 percent Hispanic with almost half the population illegal aliens: 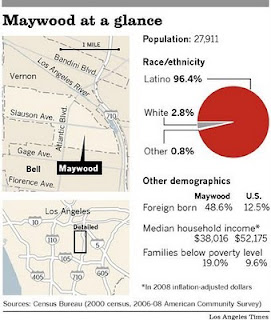 Maywood's $10.1-million general fund budget has a deficit of at least $450,000, officials said. Beyond that, the city has been unable to obtain insurance because of a history of lawsuits, many involving its Police Department, which also patrols Cudahy. Operating without insurance would make even routine government services highly risky.

Aguirre said filing for bankruptcy was not an option for Maywood because its problems were related specifically to insurance coverage and not cash flow.[]

And there's a video:

Now do see what the inhabitants of Farmer's Branch, Texas, Hazleton, Pennsylvania, and the other towns that are resisting the illegal invasion are worrying about?