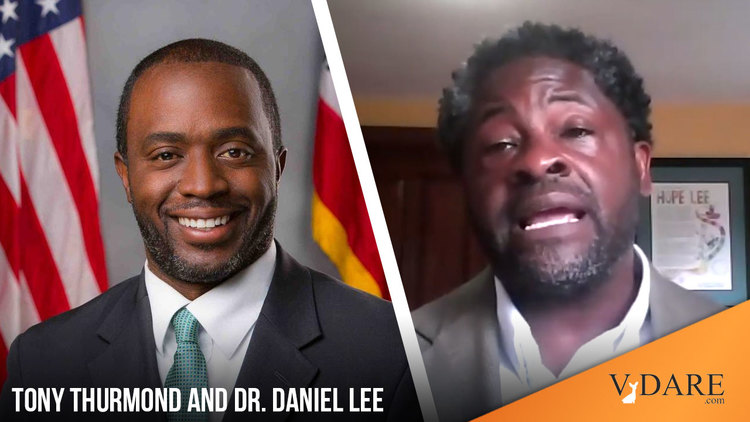 It's reported that California Department of Education’s first deputy superintendent of equity, Dr. Daniel Lee (who is black) has resigned after it turned out that he doesn't live in California, but is running a diversity business in Philadelphia. He got the job after being hired by the California State Superintendent of Public Instruction—who is also black.

So how did Lee get this cushy no-show state job that pays nearly $180,000 in taxpayer-funded salary? [California GOP Assemblyman Kevin] Kiley said the brand-new position was created by State Superintendent of Public Instruction Tony Thurmond specifically for Lee, his personal friend and former groomsman.

The PJMedia story doesn't actually say either of the men is black, but it does highlight the almost incredible brazenness of the corruption here:

One has to wonder how someone in Thurmund’s position could possibly not know hiring Lee was at minimum unethical and at most illegal. Did he really think a scandal involving the hiring of his out-of-state, unqualified pal for a state position under his direct management was really the best way to “fix” California public schools? It does boggle the mind, but it’s the left we’re talking about here–so it wouldn’t be a surprise if he feigned that he didn’t know.

It's not the left we’re talking about here, it's a corrupt black politician.

The Politico investigation that led to this also doesn't say either Lee or Thurmond is black, but it does talk about race a good deal, since California's problems with race are what a "deputy superintendent of equity" is supposed to fix.

Daniel Lee, a psychologist, life coach and self-help author, owns a Pennsylvania-based psychology firm and is the president of the New Jersey Psychological Association’s executive board. He has also been serving as a deputy superintendent for the California Department of Education since July 2020, a role dedicated to the success of children of color that was originally backed by a foundation grant but is now funded by state taxpayers. …

The hiring appears to flout California policy, which allows few exceptions for a state employee to live elsewhere.

"There are a number of people in California very well qualified in our universities and educational institutions who could do this work,” said Carl Pinkston, director of the Black Parallel School Board in Sacramento, which is suing the state over disciplinary practices for students of color. “Irrespective of who it is, to have someone from out of state who is not familiar with California’s dynamics and politics and challenges come in and attempt to do this work only furthers the fundamental problem, which is that the California Department of Education fails to adequately monitor schools for inequities and push for enforcement.”

He was hired to fix California schools — while running a business in Philadelphia, by Mackenzie Mays, December 11, 2021

You can't help but think that Pinkston, also black, feels that if someone is going to be paid up to $179,832 for this phony-baloney equity job, it should be Californian and Sacramento resident Carl Pinkston.

But this is a non-job addressing a non-problem. Here, according to Politico, is what this job is about:

The creation of the statewide equity-centered role comes as Thurmond and the Department of Education face a lawsuit for allegedly failing to hold schools accountable for inequity in discipline practices. Black students comprised about 5 percent of California’s total student enrollment but 15 percent of suspensions last year, according to the latest Department of Education data.

There is absolutely no reason to believe that black students in California aren't offending at three times the rate of white kids.

Although [The New Jim Crow author Michelle] Alexander claims that gobs of black men are in prison solely because of racism, there is another possible explanation: Black men commit a LOT of crime. Black people are only 13% of the U.S. population, but commit 33% of all violent crime (not including murder), according to the Department of Justice.

The black students offending in school can be expected to offend at a similar or greater rate than their black adult brothers and sisters. If, in some places, black students aren't being disciplined at a higher rate, it's because schools are letting them get away with stuff that wouldn't be allowed in white schools.

One further question: If black students are only about 5 percent of California’s total students, why is the California State Superintendent of Public Instruction—for the whole state—a black person? Couldn't they find a Hispanic?