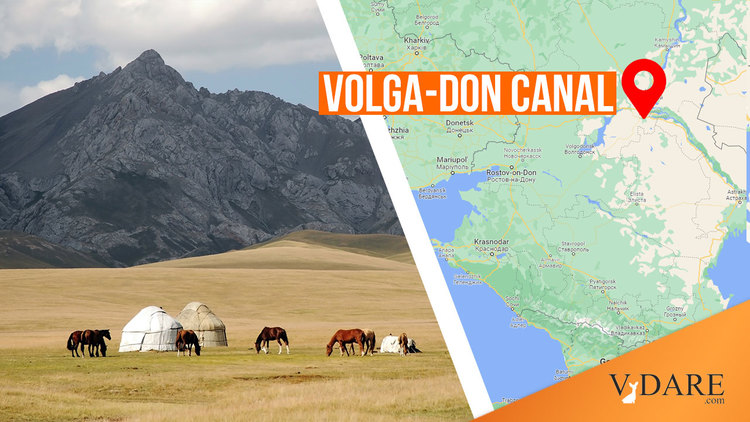 Modern Domestic Horses Come From Russian Steppe In 2200 BC

From the NYT science section:

A comprehensive new paper tested 273 ancient horse genomes to pinpoint when and where modern horses were domesticated.

For thousands of years, the grassy plains of Europe and Asia were home to a mosaic of genetically distinct horse lineages. But a single lineage galloped ahead to overtake and replace all the other wild horses.

… After collecting and sequencing 273 ancient horse genomes, a team of 162 authors concluded that modern horses were domesticated around 4,200 years ago in steppes around southern Russia, near where the Volga and Don rivers intersect. They don’t actually intersect, but they are connected by a relatively short canal.

In recent years, scholars homed in on a Botai settlement in the Kazakh steppes that was brimming with horses’ bone fragments and clay pots that were lined with what appeared to be mare’s milk. This was the earliest archaeological evidence of horse domestication, and seemed promising as the birthplace of modern horses.

But in 2018, a team of researchers including Dr. Orlando sequenced the genomes of the horse bones at Botai. To the researchers’ surprise, the Botai horses did not give rise to modern horses, but were instead the direct ancestors of Przewalski’s horses, a stocky lineage originally thought to be the last wild horses on the planet.

There is a herd of Przewalski’s horses at the San Diego Zoo, and they are pretty terrifying.

They revealed Przewalski’s were not wild after all, but instead the feral descendants of domestics. …

A little over a year ago, they were able to pinpoint the precise location: the Volga-Don region in what is now Russia.

With such a gargantuan data set, the researchers ended up answering additional horsy historical details. They found modern horses had two stark genetic differences from other ancient lineages — one gene linked to docility and another to a stronger backbone — which may have facilitated the animals’ spread.

My guess is the first horseback riders were 120 pound 16-year-old skateboarder types who feel no fear.

It took a long time to develop horses that could effectively carry a grown warrior. Thus early cavalry tended to be chariots.

The study also knocked down ideas about horses’ role in earlier human history. For instance, one pre-existing theory suggested a pastoralist people called the Yamnaya were able to migrate on horseback in massive numbers into Europe around 5,000 years ago. But the new genetic map found no evidence; the researchers point out oxen, not horses, could have been the driving factor of their expansion.

Exactly what the Yamnaya had going for them remains a mystery.

The new paper also reveals domestic horses spread across Eurasia along with the Bronze Age Sintashta culture, which possessed spoke-wheeled chariots, around 3,800 years ago. …

Like all other humans, he rides domestic horses — descendants of the ancient animals that galloped in southern Russia.

“I would not dare approach a Przewalski’s horse,” Dr. Orlando said.