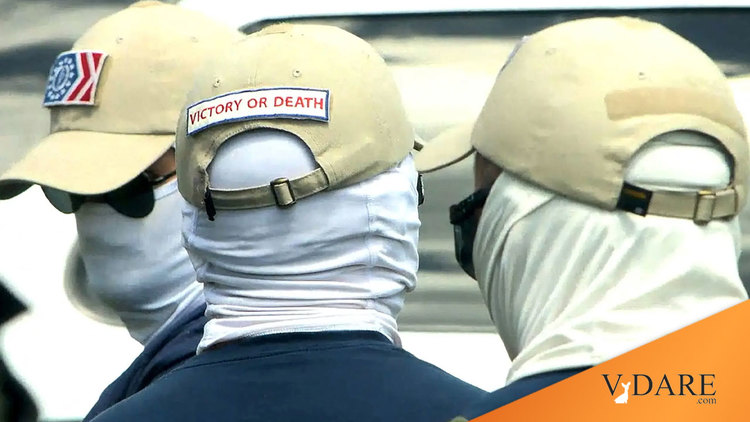 More From Sam Dickson On The Patriot Front

A commenter on Gab objected to my statement in my previous comments on the Patriot Front arrests that the organization is “not even racially aware. It's a civic nationalist organization.” He’s right.

I was thinking of the Proud Boys and someone I know in Atlanta who is usually reliable said the group was okay. He was talking about the Proud Boys at the same time and the two groups probably got scrambled in my mind.

I read a lot of fluff clucking about how the group has "defaced murals," which I suspect can be deconstructed to mean that they erased graffiti; for putting stickers on signs at a courthouse; and have been condemned by the ADL as the foremost distributors of racist pamphlets.

Nothing serious until this "conspiracy to riot" charge.

I just received the address of their website, which consists of a manifesto—sample:

When our pre-Columbian forefathers left their European homes, they found a savage continent. They held a variety of purpose, yet against the harsh life on the frontier and the common enemy in the strange and unexplored reaches of America yet to be touched by civilization, they found a common cause and a common identity as Americans. From the varied nations and cultures of Europe a new nation was forged in the flames of conquest. E Pluribus Unum was the new creed that bound our people together with their pan-European identity as Americans. To be an American is to be a descendant of conquerors, pioneers, visionaries, and explorers. This unique identity was given to us by our ancestors, and this national spirit remains firmly rooted in our blood.

It is clear that they intend for citizenship to be limited to white Europeans. However, they say others can live here but not be citizens. (I'm more consistent than that. I don't think we can allow aliens to live among us.)

In hastily reading their manifesto I did not see anything that advocated the violent overthrow of the government or the commission of crimes.

Their position seems to be the same as mine:

This certainly takes them out of the category of "civic nationalists" and they clearly see race as one of the defining factors of the new state.